I haven’t done a movie round-up in a while so I thought I’d share a few of my favorite horror films with you guys! Andddd it also helps that my bf was recently visiting and we spent a big chunk of our time binge-watching scary movies.  Most of these are Asian so I hope subtitles don’t annoy you. 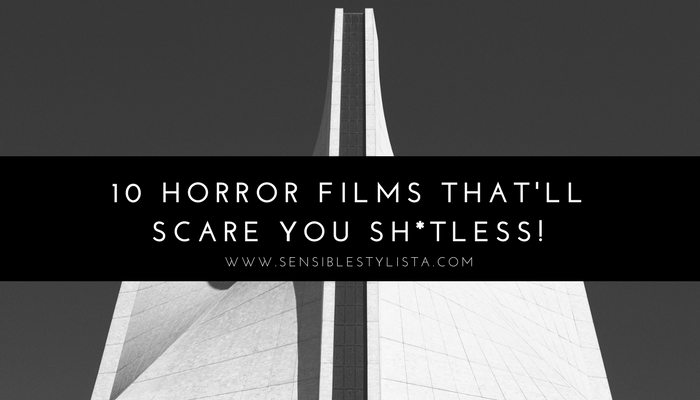 This movie left me seriously disturbed for days on end.  It’s originally based on a novel, and it’s about a widower who sets up a fake audition with a producer friend to meet his “future wife.” With his son’s blessing + encouragement, he finds the woman of his dreams and pursues her even though she’s shady AF.  Asami, the love interest, takes crazy to a whole ‘nother level in this film, and her performance will leave you feeling physically ill.

This movie was so popular that it was remade in the US as “The Uninvited.”  It was an ok adaptation, but as I’m sure you’ve guessed, the original’s way wayyyy better, like there’s no comparison. Basically, a disturbed teen gets released from a mental hospital and rejoins her family at their secluded estate in the countryside.  She’s happily reunited with her younger sister whom she adores but has to deal with her POS stepmother who abuses them both physically and verbally.  This film masterfully incorporates supernatural elements throughout as well.  I can pretty much guarantee that you’ll be on the edge of your seat from start and finish, and the crazyyyyy @$$ twist at the end will leave you stunned.

Another Korean gem!  This movie’s the ultimate revenge film, and it features one of my favorite actors:  Lee Byung-hun.  The dynamic between him and Kyung-chul (the antagonist) is gold.  Byung plays a badass secret service agent named Soo-hyun whose fiance was murdered by the aforementioned serial killer.   After he confirms that his girl was indeed brutally killed by Kyung-chul, he hunts him down and tortures him time after time.  The vengeance gives him great pleasure…until it backfires.

I was skeptical when I stumbled upon this movie on Netflix, but it turned out to be exciting as hell! I’m not usually a fan of zombie movies, but this one’s money – it’s super entertaining, and I love that it doubles as a social commentary, addressing problematic issues in Korean culture regarding status and greed.

The movie focuses on Seok-woo (a divorced workaholic) and his daughter, Soo-an.  Soo-an lives with her dad but wishes she could be with her mom in Busan.  All she wants for her bday is to visit her mother, but Seok-woo tells her he’s too busy to take her! However, after seeing a video of his daughter crash and burn at a school performance, he changes his mind and heads to the train station with her.  While they’re there, an infected passenger manages to sneak on, infecting the entire train within minutes leaving only a handful of survivors.

I already talked about this film on SS, but I couldn’t resist listing it in this roundup because it was that good.  The description sounds dumb, but don’t be fooled, this movie is scary as hell.  It’s honestly the best American horror film I’ve seen in the last decade or so.  The movie follows a beautiful college student named Jay who’s being chased by a supernatural entity after sleeping with her new boyfriend, Hugh.  He drugs her afterwards and takes her to an abandoned lot to explain the sitch – she will only be able to see “it,” and it will follow her relentlessly at a walking pace until she’s dead at which point it’ll pursue the previous person (aka Hugh).  I know, I know – it sounds lame, but I swear to god it’s good.

A supernatural film based on a real South Korean myth!  In this movie, two detectives (So-young and her partner, Hyun-ki) look into the mysterious death of a young girl ten years back. During the investigation, SY’s plagued with visions & nightmares while gruesome murders continue to happen on her watch.

I don’t know what it is about Japanese films, but they’re all so damn scary.  Based on Koji Suzuki’s novel, this plot follows a devoted single mother who moves into a shoddy apartment with her daughter.  Their rundown place has a lot of problems, but the water leak from the unit above causes them the most drama, hence the name.

This movie follows a successful (and fictional BTW) crime writer named Ellison Oswalt (aka Ethan Hawke).  He moves his fam into a home…where murders occured on site…to work on his next novel. His wife + kids obviously have no idea, but when they find out later? NOT pretty, ha.  Anywho, while rummaging through his attic, Oswalt finds an old box with home movies that seem innocent but turn out to be something entirelllly different.

If you haven’t seen the Japanese version yet, you seriously need to.  It’s WAY scarier than the American version – there’s just something about asian ghosts that are terrifying, don’t you think?  I’m sure you guys are familiar with the premise, but basically, when a person dies with a deep and powerful rage, a curse is born, and anyone who encounters it ends up on a spiritual sh*tlist.

Quite possibly the scariest Thai movie I’ve ever seen!  The film follows Tun, a well known photographer, and Jane, his beautiful girlfriend.  After he gets wasted at a party, Jane drives him home – she’s not drunk at all, but she ends up running over a young woman who seems to appear out of nowhere.  Her boy freaks the eff out and forces her to drive off out of fear, only to discover white shadows that look like faces in his photographs later on in the movie. His gf suspects that they’re pics of the girl they hit on the road, but he shuts her down, refusing to believe in ghosts. Anddd there may or may not be other secrets that emerge, hint hint.  Shutter was remade in the US in 2008, and I actually really enjoyed the adaptation.  I didn’t think Joshua Jackson could pull off the role, but he did a solid job with it all.

Alright guys, that’s it for today!  Are any of you big into horror films? If yes, what are some of your favorites? Have you seen any of these movies? If so, what did you think?  Definitely make sure to let me know by commenting below.