Where to Get the Best Desserts in the Bay Area

I am oh so excited for this post, friends.  As you know, I recently visited the Bay Area, and I pretty much spent the entire time eating with my manfriend.  I had an excuse though! I was covering restaurants for Nomtastic Foods.  I obviously got zero joy out of it, and it was purely work. Yeahhhh, I can’t even write that with a straight face.  Everything was delicious and 200% worth the calories.   So much so that if you’re planning to visit SF, you need to bookmark this post and visit all three of the following places.  Trust me, you will leave completely and utterly satisfied.

Located on 22 Peace Plaza (in Japantown), Uji Time Dessert’s open from 12:30-9 Sunday through Thursday and 12:30-10 on Fridays and Saturdays.  The item to get here is their taiyaki soft serve.  Do NOT get their ice cream in a cone or cup ($4.25) because that’s basic, and you’ll seriously be missing out.  A small taiyaki only costs $5.99 (one flavor + 2 toppings), and it tastes so much better.  You can get it without filling – …but don’t, ha – or get one stuffed with nutella or red bean.  Now, I love nutella as much as the next, but IMHO red bean is the better choice in this case.

They have 4 flavors total, and I’ve tried three thus far:  matcha, black sesame and watermelon (seasonal).  I haven’t had a chance to try tofu yet, but I will definitely do so the next time I’m in the Bay.  Their soft serve is PHENOMENAL – yes, that required all caps – and I can’t recommend it enough.  It’s hard to pick favorites, but if I had to choose, I’d go with black sesame.  Robby prefers the matcha though so you can’t go wrong with either!  Pro tip:  go with a swirl if you want to experience both.  Now, the seasonal flavor was good, but it wasn’t really my jam.  Don’t let that discourage you from trying it though!  It was refreshing and tasted EXACTLY like watermelon (not in an artificial way), but I’m biased because I’m just not big into watermelon, lol. 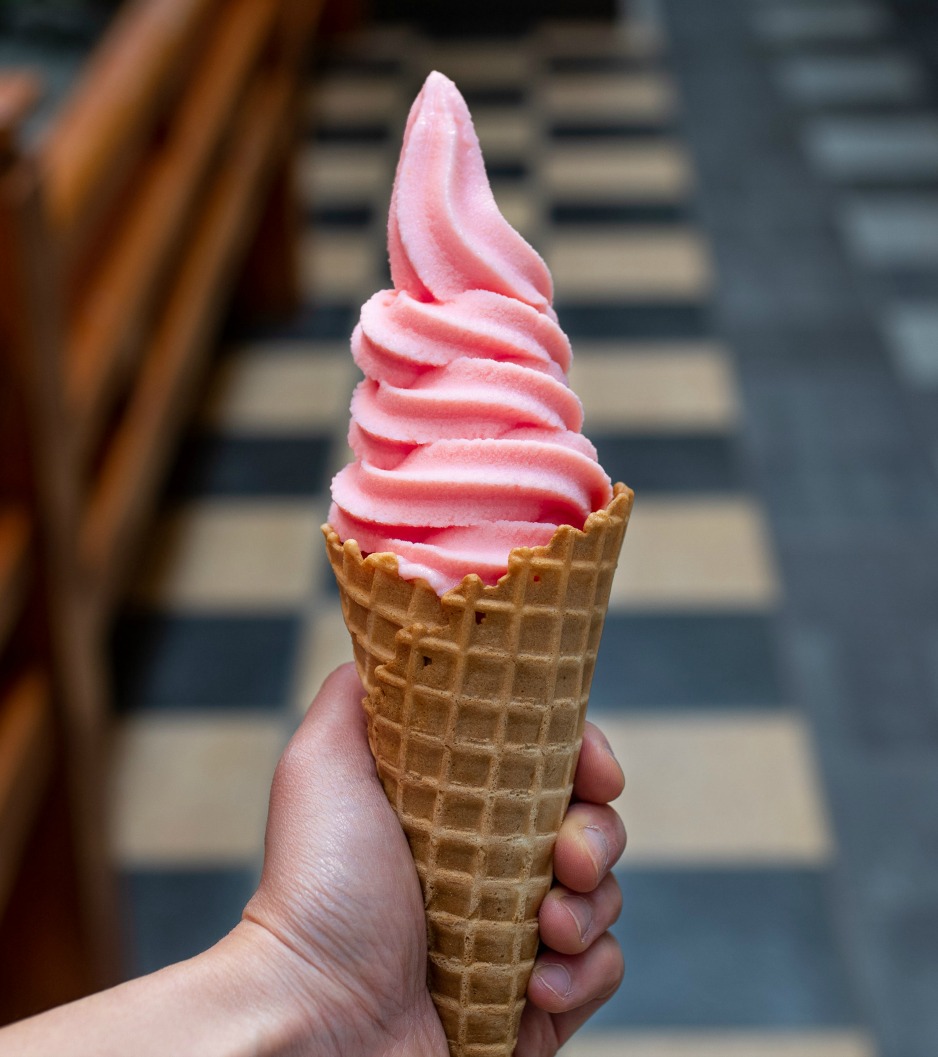 In regards to size, their small’s actually quite big, but if you’re hungry, go for their regular (1-2 flavors for $6.99) or deluxe (1-2 flavors + 2 toppings for $7.99).  They have a nice selection of toppings as well – I really like their matcha powder and their kinako (soy bean powder).  The latter complements their black sesame soft serve beautifully so it’s my go-to as you can see!  Other toppings include azuki (aka red mean), honey, sprinkles, pocky sticks, poppy seeds and chocolate sticks.  They also have french crepe and dango (costs extra though fyi) for those of you interested. 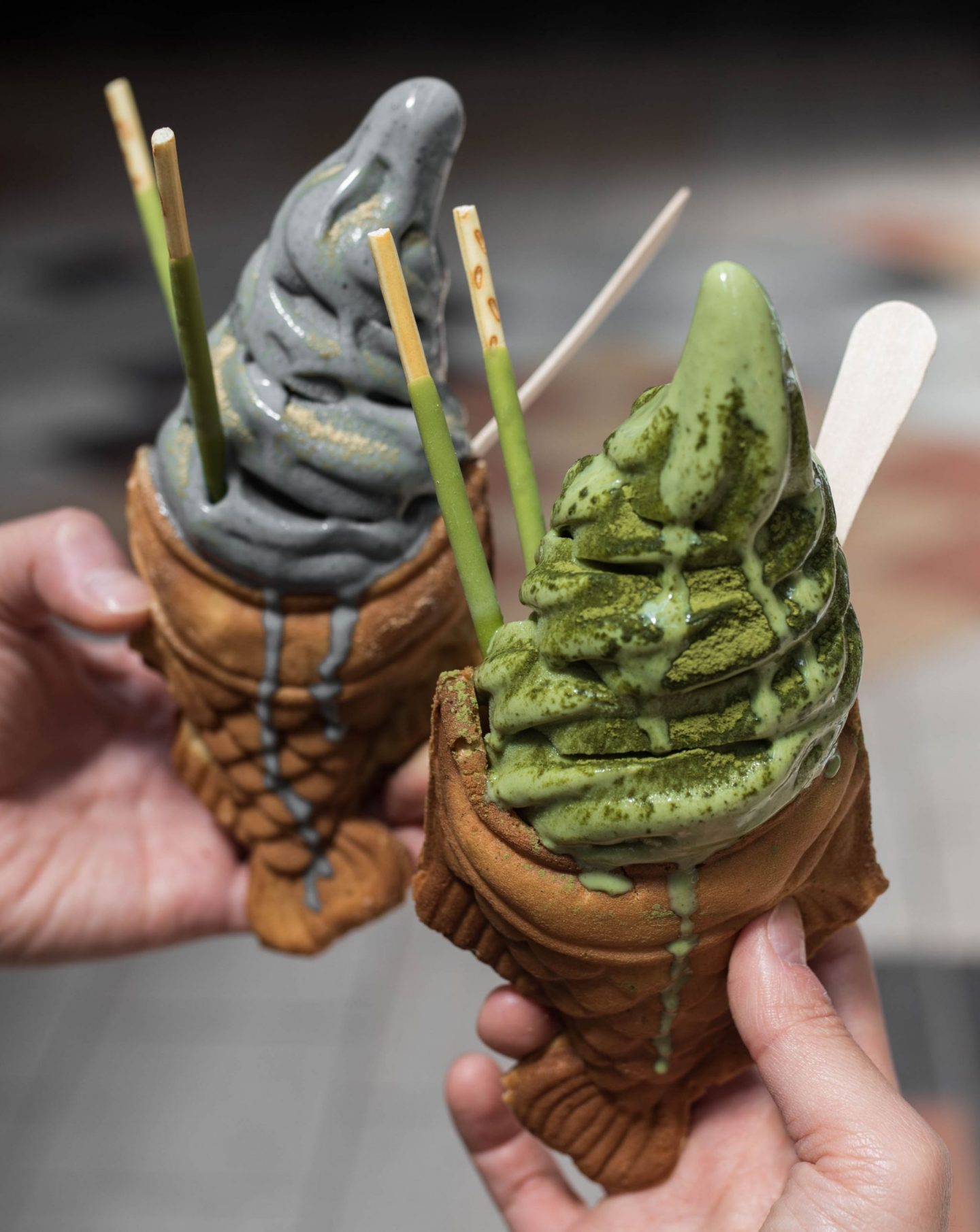 They have a second location in Berkeley, and their menu’s basically the same, but you can get a parfait there if you want.  They also sell mochi ice cream if that’s more up your alley (in both locations).  I’ve never actually tried their mochi because I love their taiyaki soft serve so much, but I hear it’s tasty as well.  One FINAL thing before I move onto the next dessert place, there’s usually a line out the door, but don’t let that scare you off.  Trust me when I say it’s worth the wait.  Everything’s made fresh to order so it can take anywhere from 5-15 minutes to get your cone – just be patient!

Matcha Cafe Maiko’s another Japantown place that is KILLING the dessert game!  Located on 1581 Webster Street, it’s open daily.  Hours are 12:30-8:30 Sunday through Thursday and 12:30-9:30 on Fridays and Saturdays.  You can get dairy free options there (ie. their matcha latte and their hojicha latte), and all their drinks/floats are gluten free.  I’ve tried all 3 of their latte bases, and they’re all on point, like I’m not exaggerating when I say you can’t go wrong with any of their drinks.

Photo shot taken pre-opening by @scenicpath aka the boyf because he’s a boss. 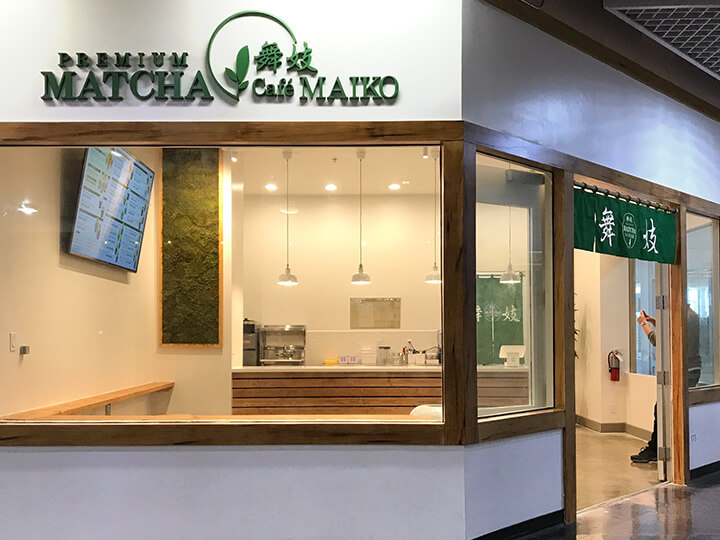 I got their Hojicha Cream latte ($4.80 for medium, $5.30 for large) and their Maiko Special with a swirl of vanilla/matcha soft serve ($7.90) and both were delicious.  Sidebar:  hojicha’s just another kind of Japanese green tea.  I wanted to take a second to explain what it was just in case you weren’t familiar with it.  Most teas are steamed, but traditional hojicha was roasted in a porcelain pot over charcoal.  Apparently, it was a way for merchants to mask low grade tea and make it more appealing to buyers back in the day.  It’s brewed at a very hot temperature – hence the reddish brown color – and has a nutty taste to it.  If you haven’t tried it, definitely make sure to do so.  It’s different but equally tasty!

The desserts were melty because I spent so much time shooting them, lol. 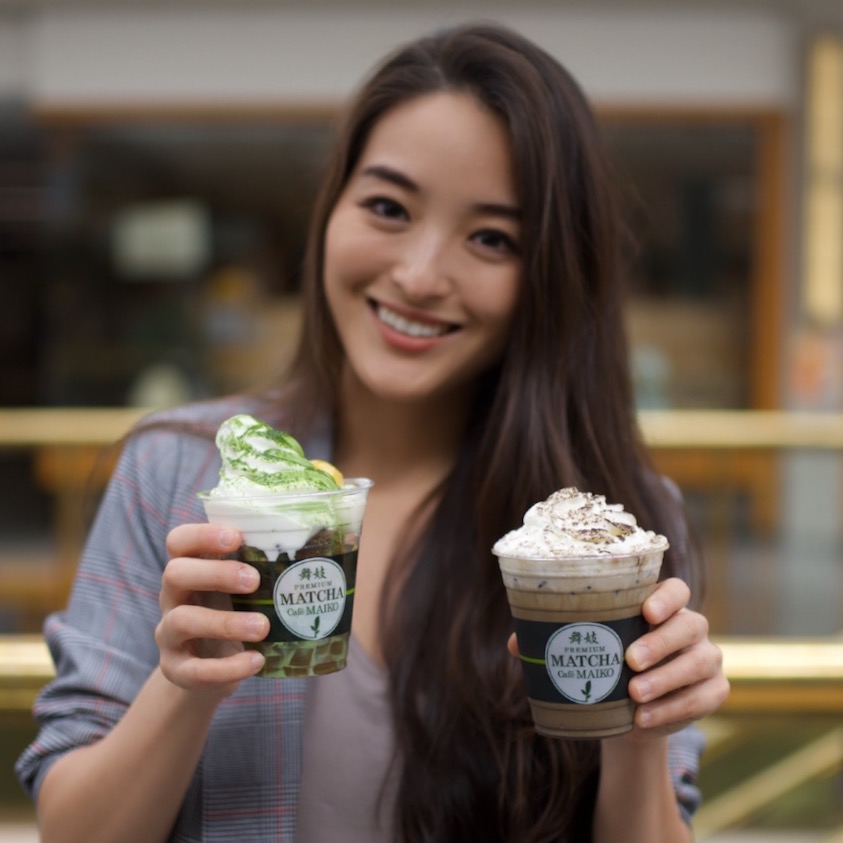 Moving on, the Maiko Special’s like a parfait with soft serve instead of yogurt.  It has jelly at the bottom, then corn flakes, then two pieces of super nom matcha pound cake topped with ridiculously creamy ice cream, which is then garnished with a chestnut and two pieces of shiratama dango (aka mochi).  This was a bamf dessert, but I hope they consider offering just pound cake + ice cream down the road.  I liked the crunch of the cereal, but I could do without the jelly…but that wouldn’t discourage me from getting this again because the pound cake was BOMB!  I recommend going with a friend so you can get different items and share.  Like Uji Time Dessert, this place always seems to have a line, but it moves REALLY quickly so don’t fret.

I don’t even know where to start with U :Dessert Story.  I am completely and utterly obsessed with this place, and I want to take everyone I know.  If you follow bay area foodies, you’ve probably already seen their impressive desserts on instagram – well, I’m happy to tell you that everything looks even better in real life, and it all tastes as good as it looks (!!!!) 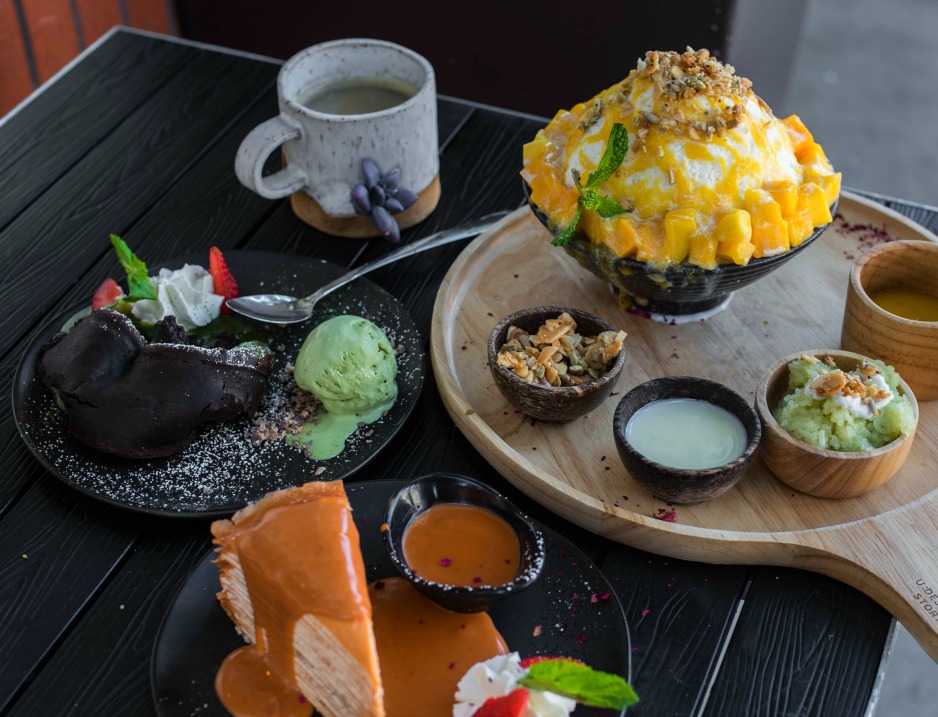 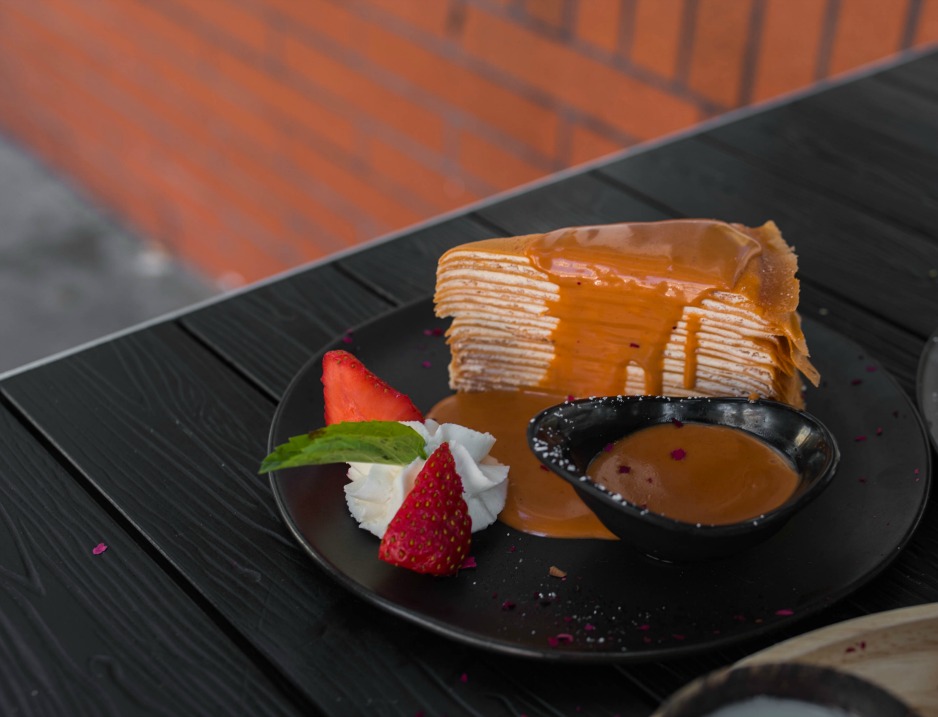 Located in the Castro on 3489 16th Street, they’re open from 1-10 Monday through Thursday and 12-10 Friday through Sunday.  The space was small, but everything from aesthetic to service was beyond impressive, and the interior was really cute.  It’s perfect for any and every occasion, but I highly, HIGHLY recommend it for dates.  It has a great atmosphere, and prices are reasonable.  I’ve actually heard people complain about affordability, but I honestly think it’s reasonable because portions are huge, like you could share one snow ice ($13-14) with at least 2-3 people.

As you can see, their presentation was exceptional.  Robby and I were there for a shoot – for our food blog, Nomtastic Foods – so we got to try a bunch of different menu items:  their chocolate organic matcha lava cake with matcha ice cream ($12.75), their thai tea crepe cake ($12), their mango sticky rice bingsoo ($13.50), and their volcano bingsoo ($14).  Their lava cake was seriously the BEST lava cake I’ve ever had.  Now, that means A LOT coming from me because it’s my favorite dessert of all time.  This was straight up obscene.  Robby and I each took a bite and just looked at each other with WTF expressions on our faces.  It. Was. That. Good.  The ice cream that came with was just ok, but this cake could stop wars. 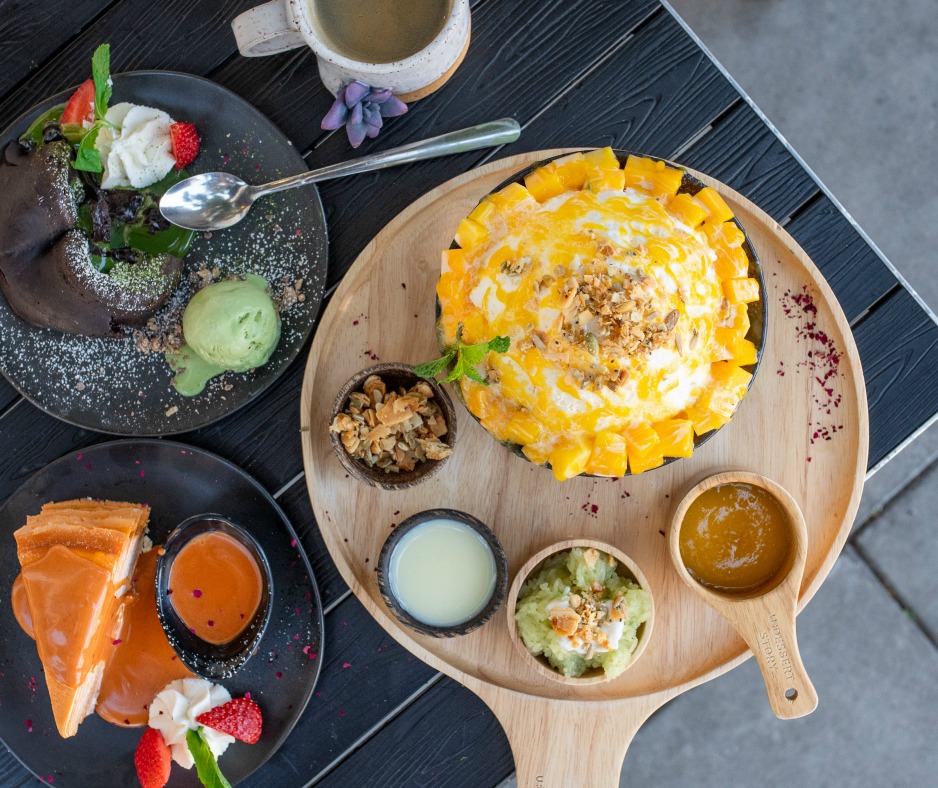 The thai tea crepe cake was great as well.  I really liked the texture, and I loved that it wasn’t overly sweet.  However, if I had to choose between the two, I’d go with the lava cake.  It all comes down to preference, and as much as I love thai tea, chocolate is my achilles’ heel.

Now, onto their bingsoo.  You guys are going to get another “oh my god” because their snow was also really good.  As mentioned previously, we got their volcano and mango sticky rice!  Although the former looked cooler – the dry ice in the middle made for some kickass presentation – the latter tasted much better, and it came with organic coconut crumble, mango puree, pandan sticky rice and condensed milk.   For those of you interested, the volcano was served with brownie bits, crispy chocolate rice cakes, banana, cornflakes and oreo.  It made for some great pictures, but I’d definitely recommend the mango over this. 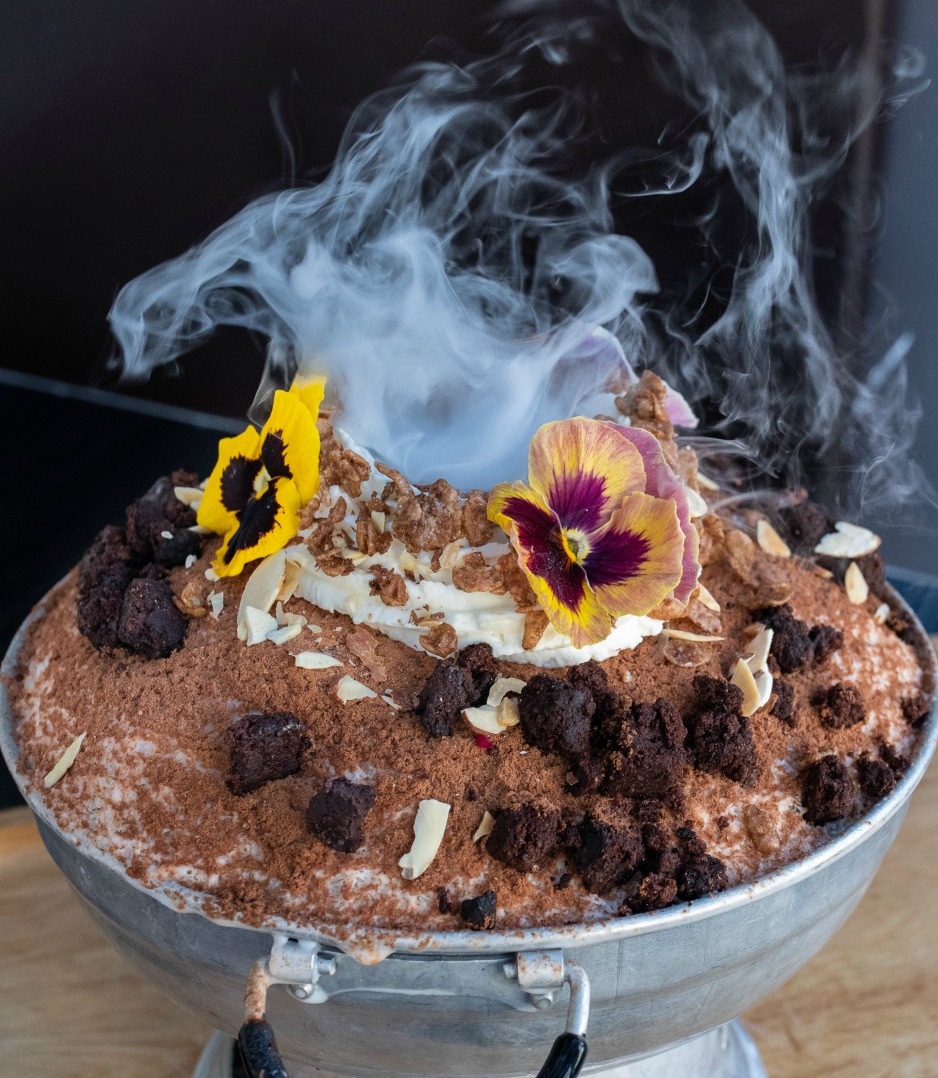 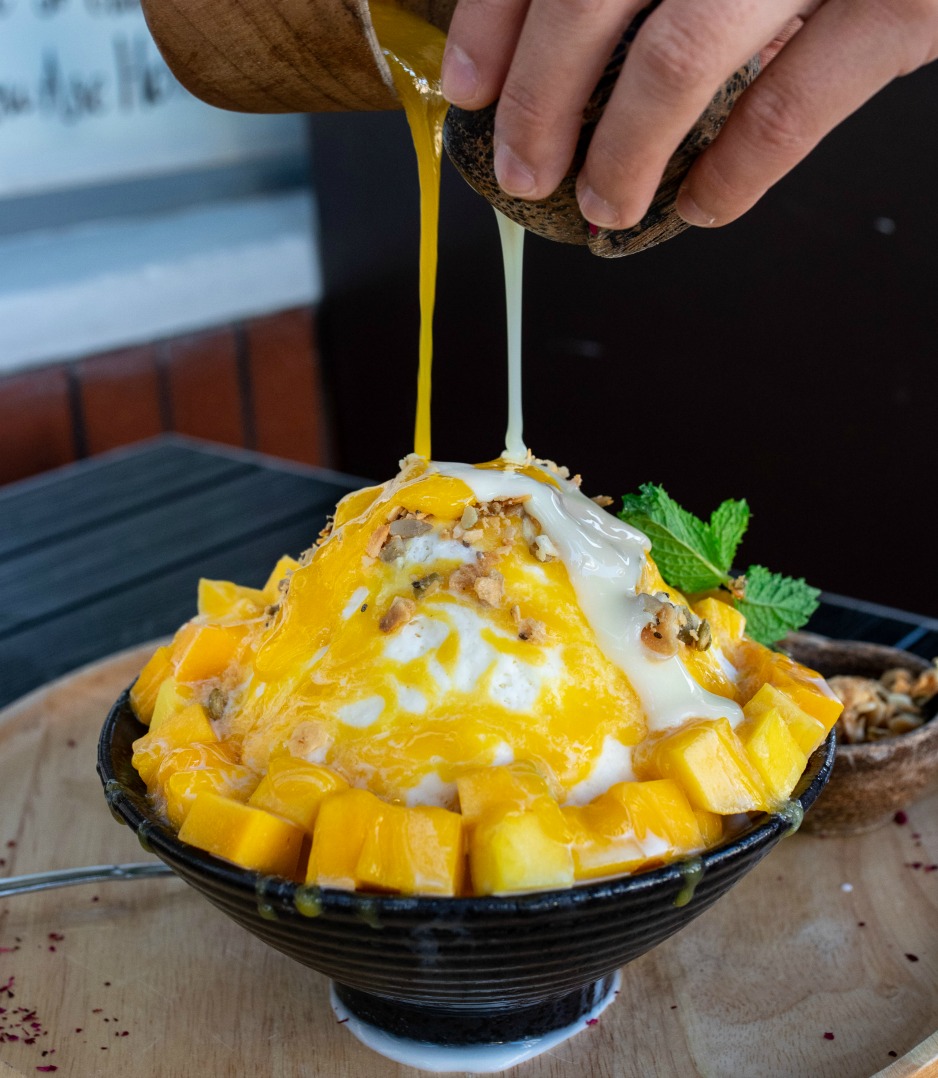 The snow was quality!  It was fine and oh so milky, which is exactly how it should be.  It really reminded me of the bingsoo I had in Korea, which is a HUGE compliment to U :Dessert.  SF doesn’t have the best Korean food so I was pleasantly surprised.  Suffice it to say, I’m excited to discover that the Bay has solid bingsoo at least!  As I’m sure you can guess, Robby and I were stuffed so we didn’t get to try their toast, but we saw some coming out of their kitchen, and it looked ridiculously good as well.  Their honey brick toast’s calling my name so we’ll have to go and try it the next time I’m in the area.

Anywho, that’s it for today!  I know this post was a long one, but I had a lot to say sooooo sorry not sorry.  In all seriousness though, I hope you found this helpful, and I hope you visit all three of these places the next time you’re in San Francisco.  Please don’t hesitate to reach out with any questions, and if you need food recs, definitely hit me up!  I’m currently working on more travel content from my trip so stay tuned for more, friends.  Remember, I post every Monday and Thursday so check back often!