Alright guys, I’m doing something a little different today.  I’ve decided to compile a list of all the yummiest foods I had in Baltimore this month!  If you’re looking for good eats in Charm City, definitely make sure to read until the very end.  I cover everything from authentic Thai to elevated bar food so you guys are in for a treat.

Not gonna lie, this burger is the epitome of decadence.  My friends are torn between loving and hating it, but I got to agree with the former.  You can’t eat this by yourself though because it’s too rich.  I recommend going with friends and splitting it 2-3 ways!  I had about 1/3 and that was enough.

It’s a juicy burger topped with spicy mayo, reduced cherries, and foie gras.  Yeah, I told you it was indulgent.  It’s one of the craziest burgers I’ve ever had, but I mean that in a good way.  Let me know what you think if you decide to try it for yourself. 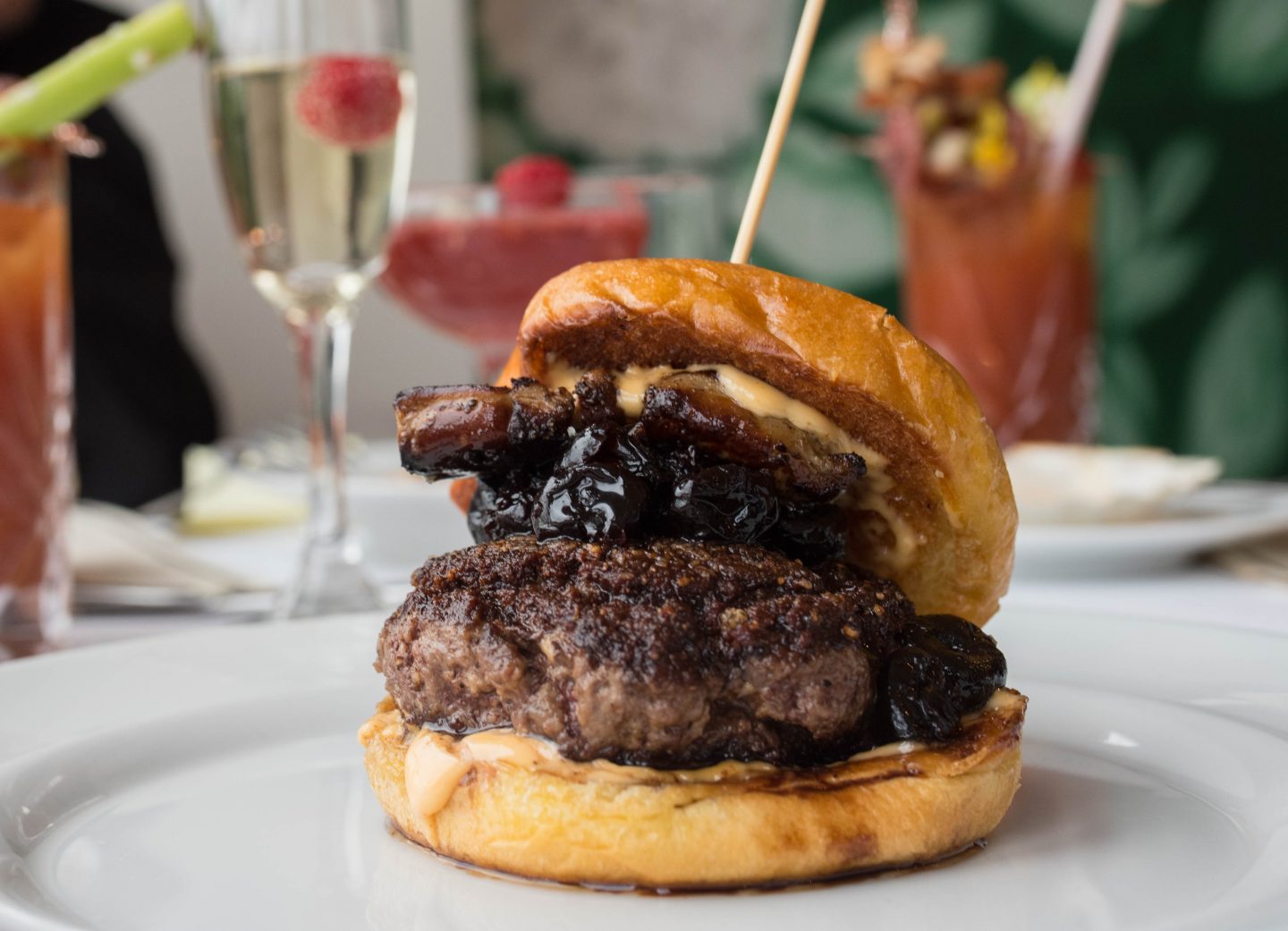 In addition to the burger, I love, love, LOVED their nutella french toast.  The outside was super crispy, and the nutella to bread ratio was perfection – not too much, not too little.  It had powdered sugar on top, which you’d think would be overkill, but it was fine.  I’m not big into sweet entrees, but I’d totally get this again. 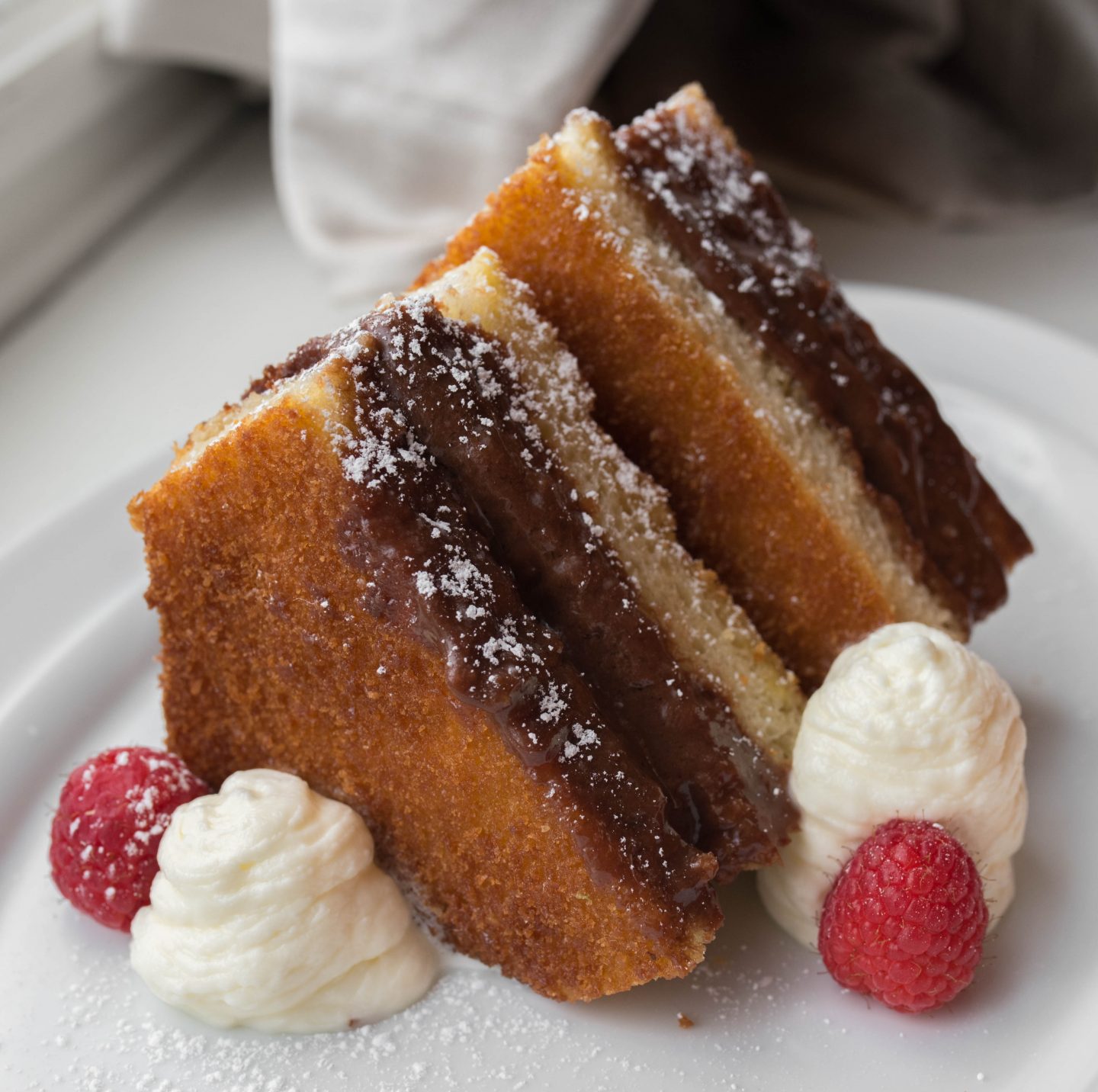 I didn’t know Baltimore had such great vegan options!  I was really impressed with the food here, and I’m already looking forward to coming back.  Honestly, if their vegan chili was still on the menu, I would’ve listed that as the main, but it was only available during vegan week [insert sad face here].  Here’s to hoping they bring it back because it was better than “regular” chili…and I’m a meat eater!  Just look at that cornbread – can you see the chunks of jalapeño?  Yes please. 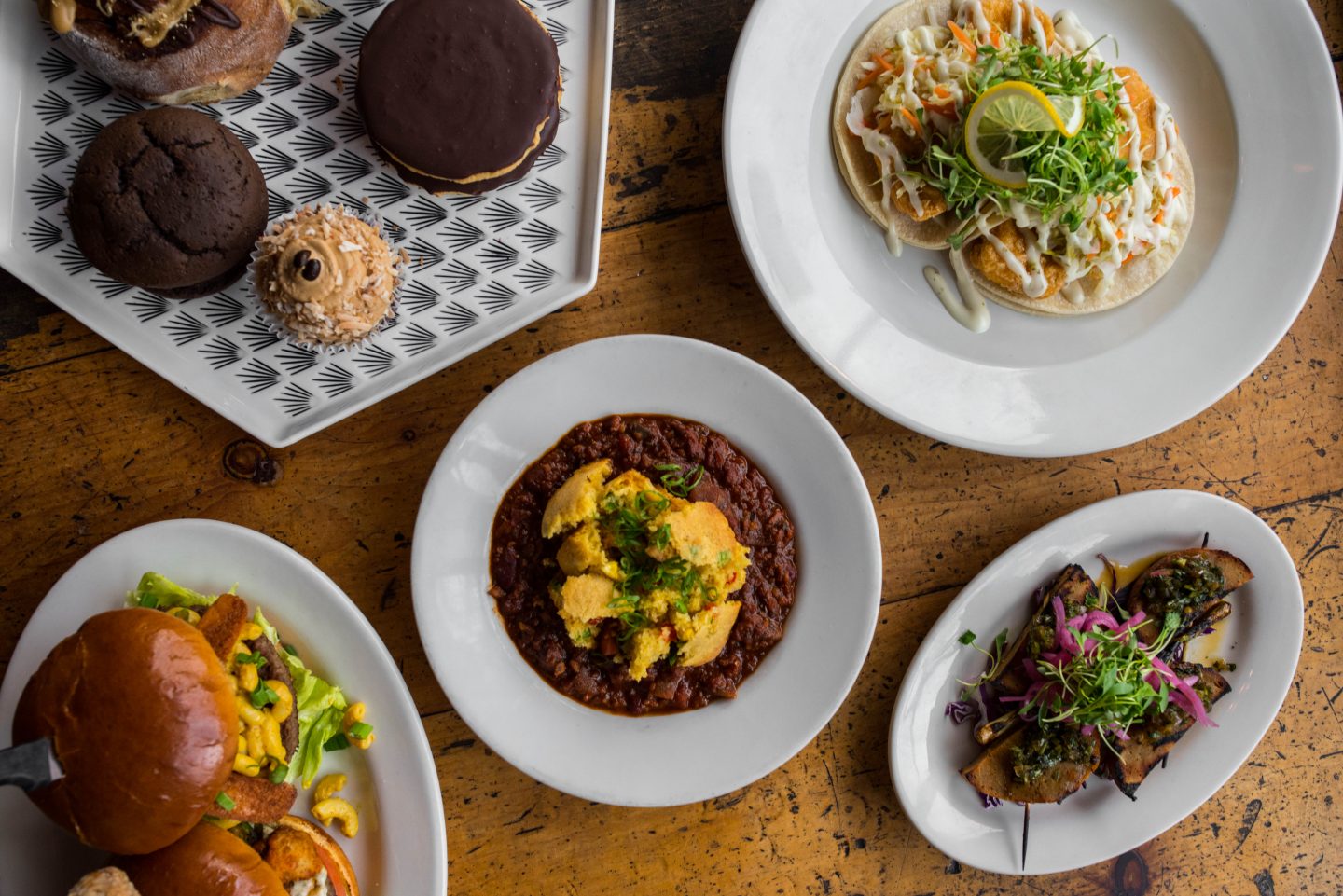 Their baked goods really were good though.  I don’t know what these cookies were called (the ones of the bottom, not the whoopie pie), but they were so obscenely tasty.  I ate an entire one by myself and was picking at the other, #sorrynotsorry.  It tasted more like cake, and it was so soft and moist.  The chocolate frosting was just the right amount of sweet, too.  I hate when desserts are so sugary you feel like you got diabetes afterwards.  Definitely make sure to hit them up!  They have meat options on their menu as well so don’t let my vegan features dissuade you from going. 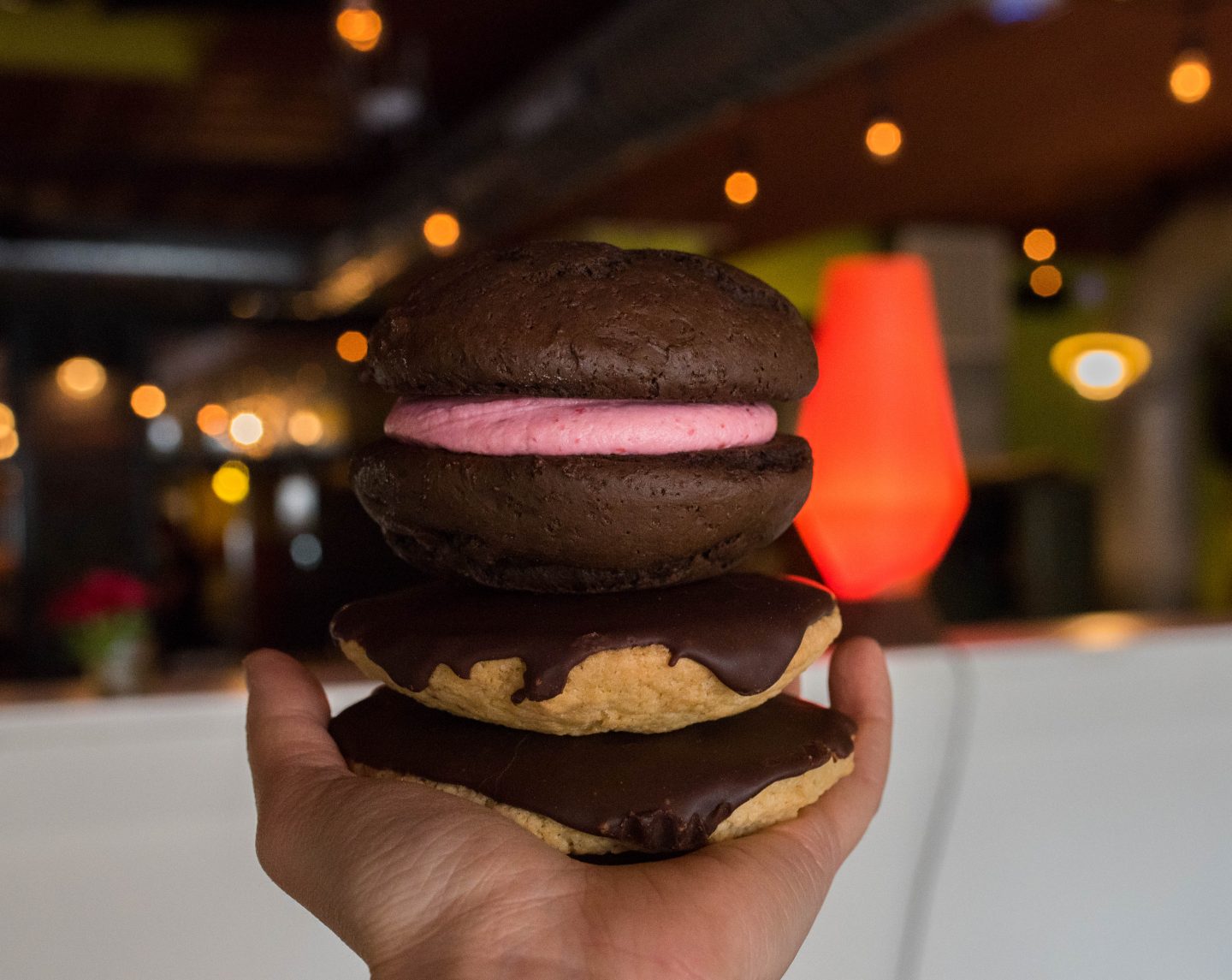 Ok, so I wrote La Calle’s Flan because it was the BEST thing I had there, but I loved a lot of other dishes as well.  We’ll start with the dessert because it was unbelievable and then I’ll talk about the other plates. 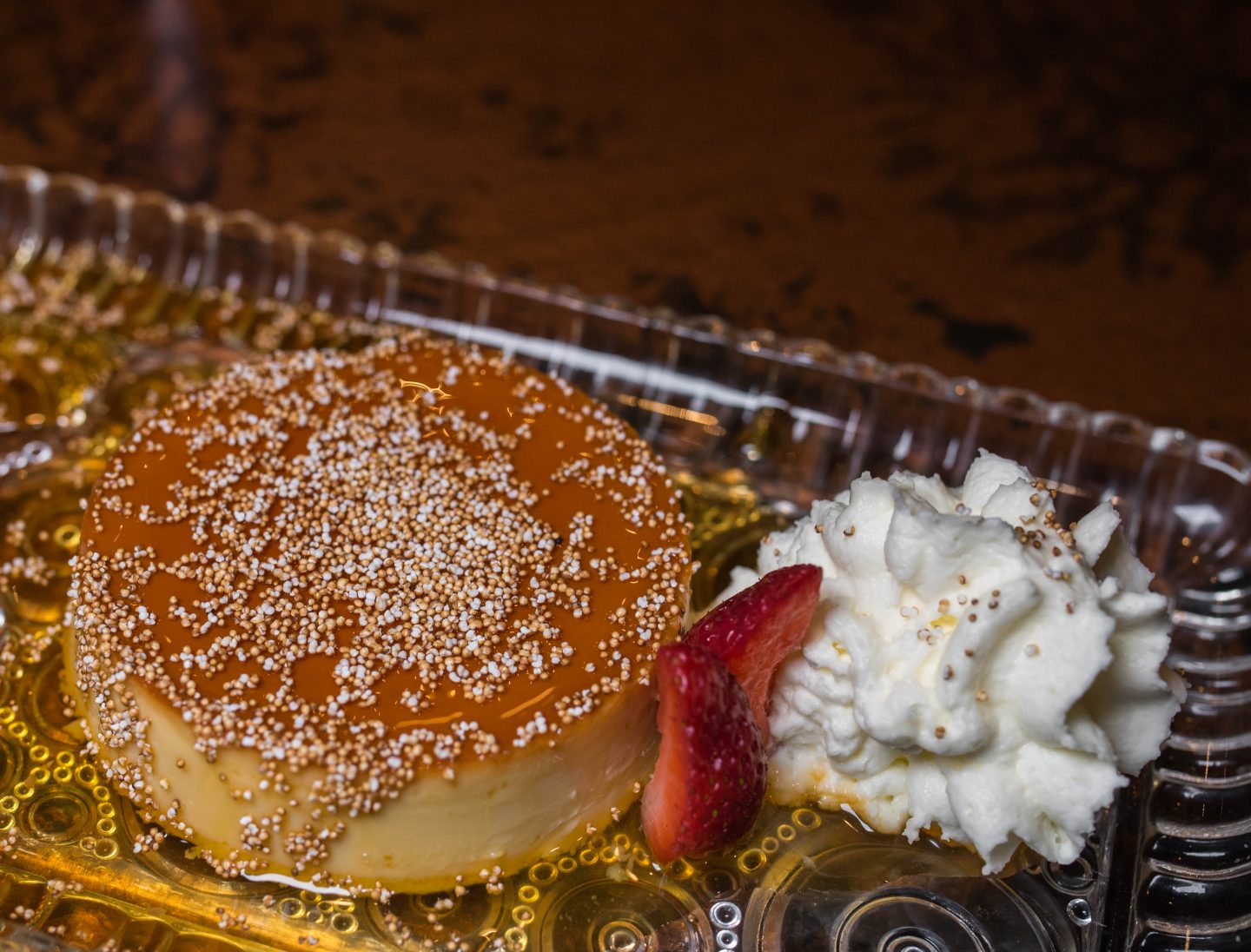 Real talk, this dessert was honestly one of the best desserts I’ve ever had.  Chef Val makes it in house from scratch, and the texture straight up blew my mind.  It’s creamy but also kind of sticky at the same time?  It’s hard to describe, but it has a strong caramel flavor that I couldn’t get enough of, like I’m legit drooling just thinking about it.  This means a lot coming from me because I’m not big into flan to begin with so definitely make sure you go and support this family-run business…by bringing joy to your belly, ha.

Now, this is gonna sound basic, but their complimentary chips and salsa? To die for.  Like everything here, this is all made in house.  These are honestly the best tortilla chips I’ve ever had.  I probably sound like a broken record saying that because I literally just said that about the flan, but I’m serious guys.  I legit ate an entire basket by myself!  The salsa was delicious as well – I wish it had a little more heat, but that’s what hot sauce is for. 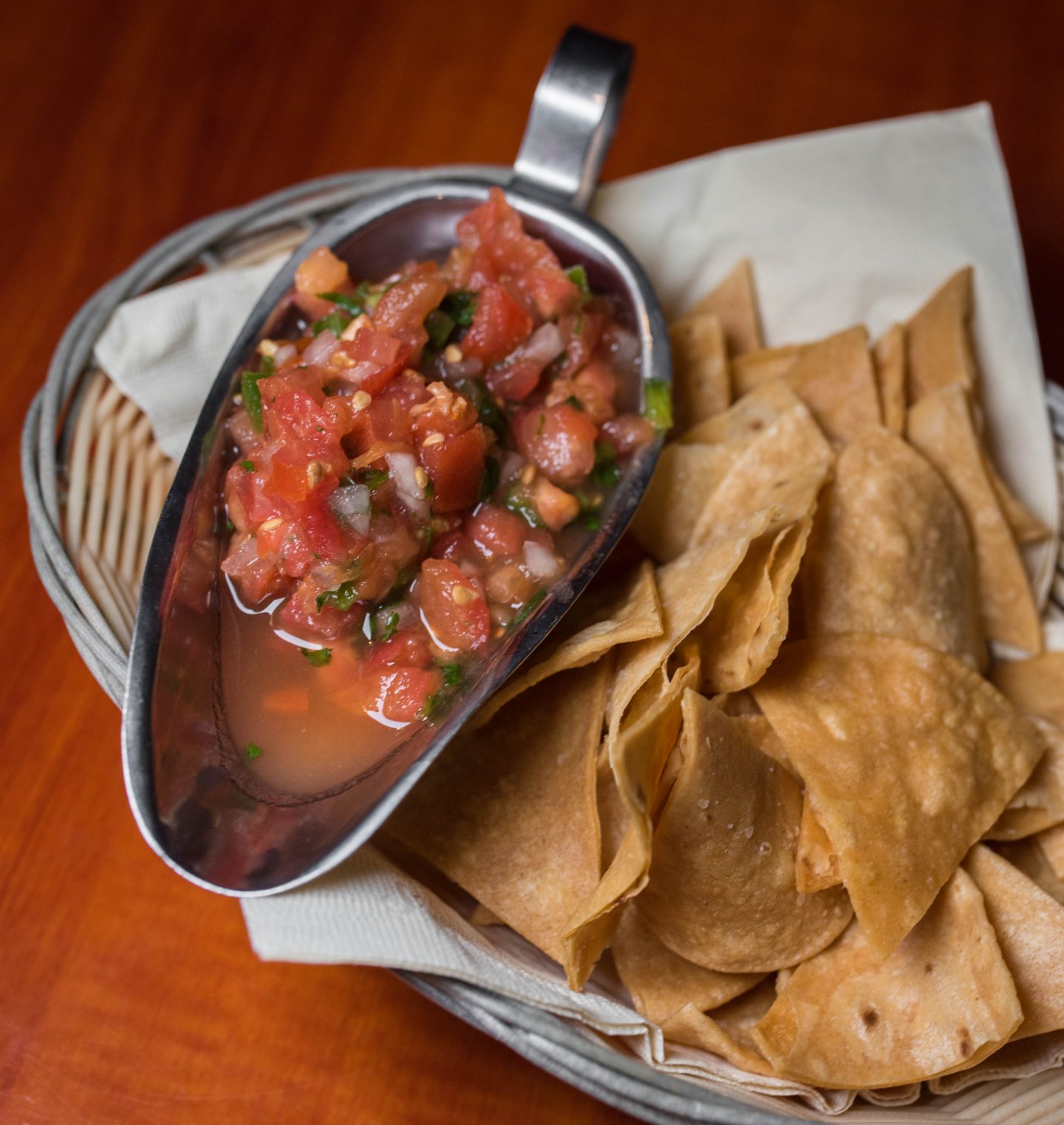 Now, if you’re a cheese lover like me – and if you aren’t, we can’t be friends – you need to get their queso fundido with chorizo.  This was really quite delicious, but pass on this if you’re counting calories…or if grease grosses you out.  Slather this magical goodness into a warm tortilla and let the food coma commence.  You’re so welcome. 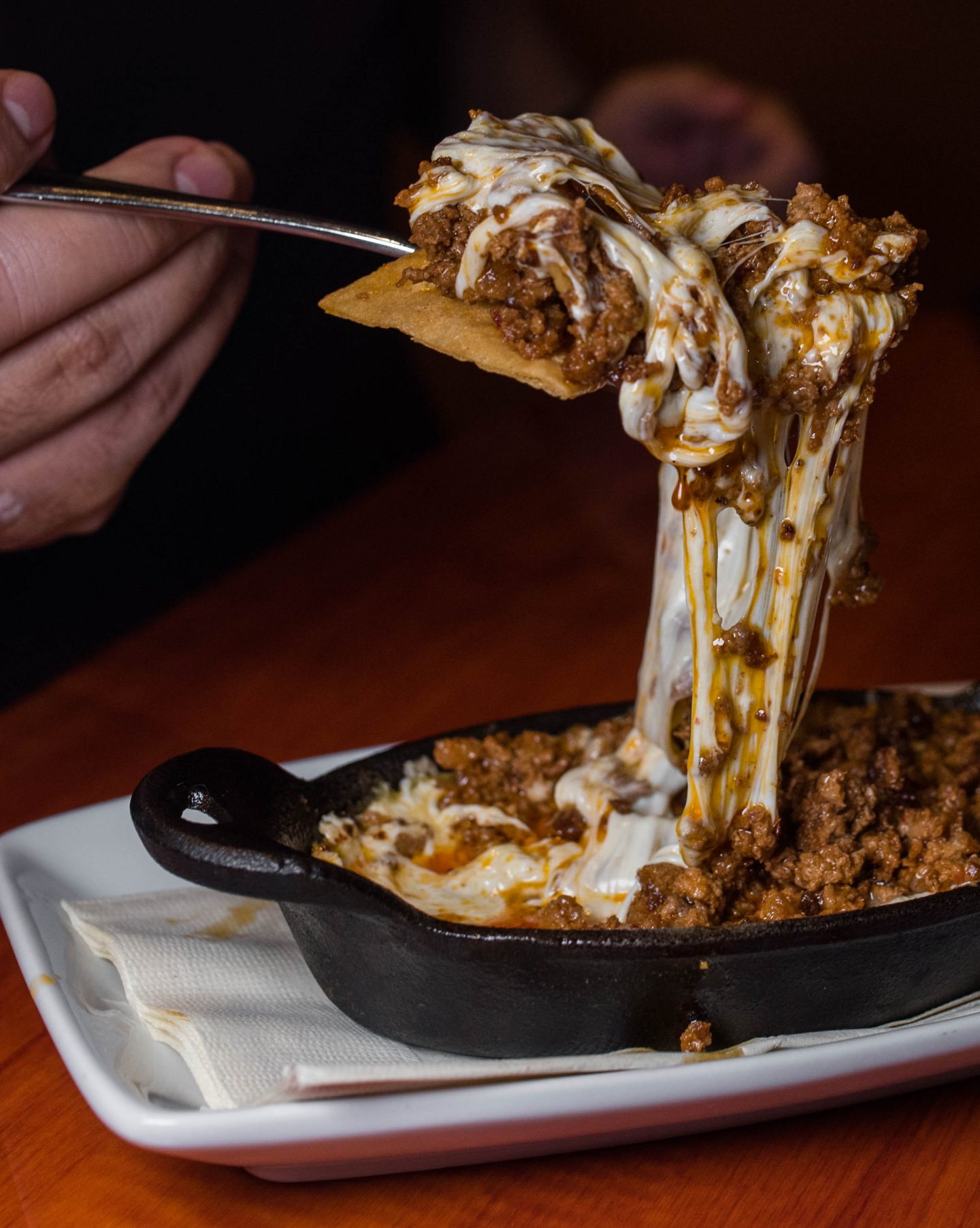 And finally, their chicken mole.  This plate came with black beans and a tamale, and I couldn’t be more impressed.  This was, hands down, the best mole I’ve ever had.  The chicken and tamale were both super moist, and the sauce was as flavorful as can be.  I enjoyed the chocolate undertones, and really loved how everything came together.

If you’re looking for solid Mexican cuisine in Baltimore, La Calle is an absolute must.  I’m going to come back and try their tacos as well!  I’m team Cocina Luchadores when it comes to tacos, but maybe they’ll change my mind.  Where do you guys get your taco fix in Baltimore?  Let me know by leaving a comment below, friends. 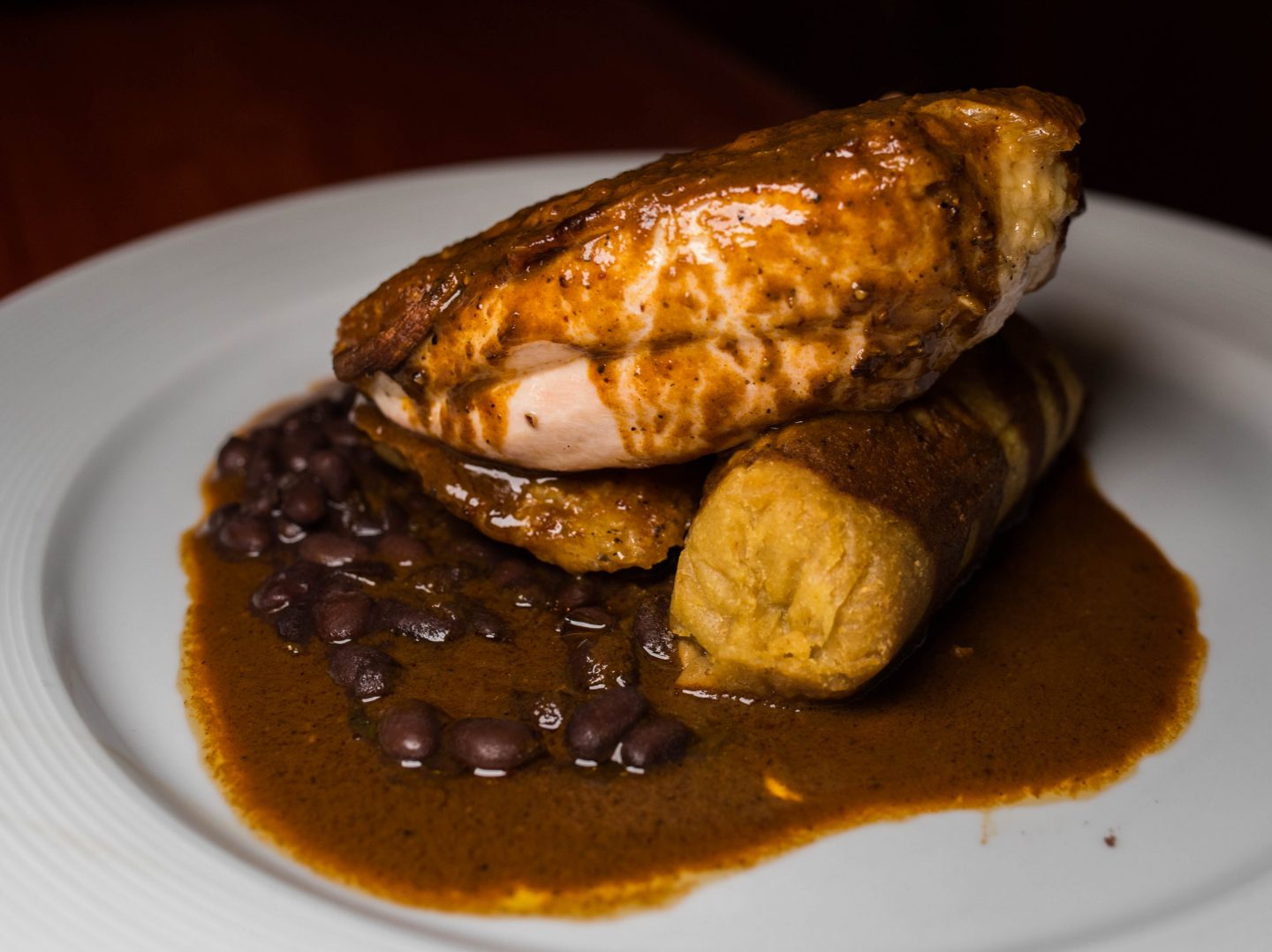 I’m so glad I finally got to try Wet City’s food – it’s like elevated bar food!  I’ve heard so many great things about them, and I’m definitely a fan.  My favorite dish there is their soft pretzel app, and it comes with a side of cooper cheese sauce.  If you’re a carb lover like me, you will fall head over heels in love with this starter.  I really liked the minimalist vibe they had going on, I’d honestly go back just to have this again! 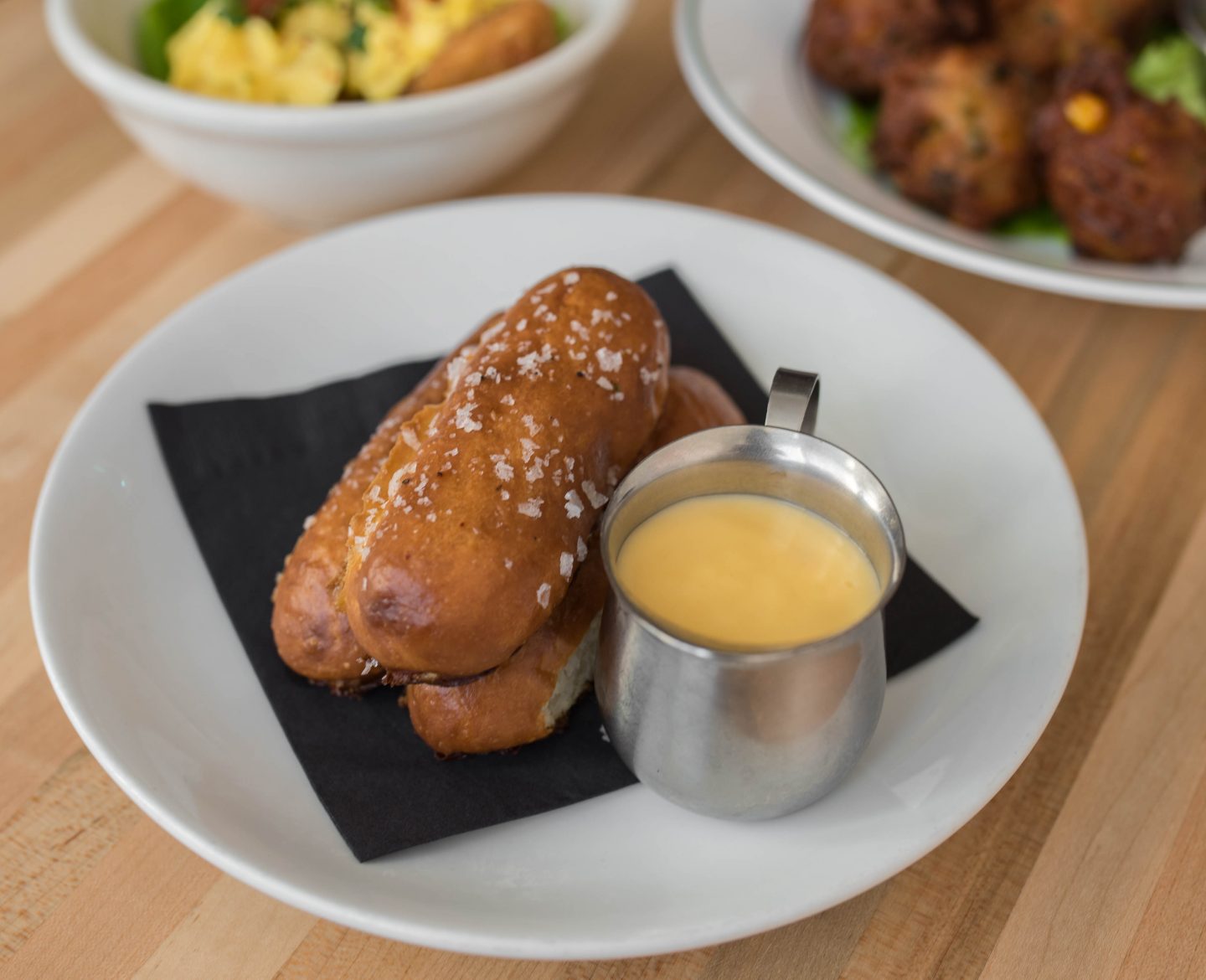 I had a migraine while I was there so I didn’t get to try many of their drinks, but if you’re big into beer, that’s more of a reason to go since they brew their own.  I hear their Boysenberry drank is money.

I don’t know if you guys remember, but a while back, I had my favorite Charm City bloggers discuss the best crab cakes in the area – if you missed it, you can read it here on food blog.  To be honest, I’m not big into seafood, but I really liked Angie’s Seafood’s crab cake. 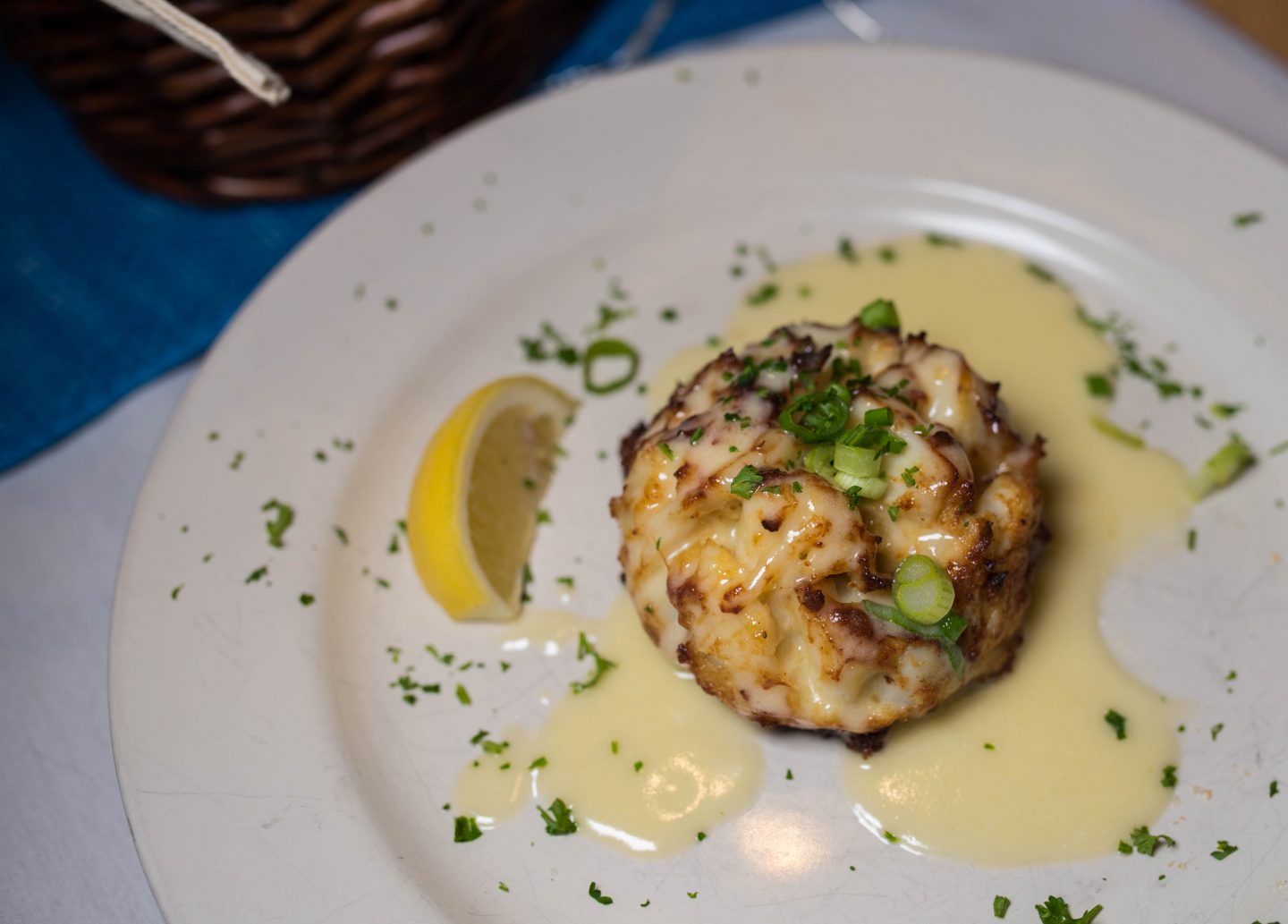 It had very little filler, and it came with this delicious lemon garlic sauce.  At $35.95 (dinner price for 2), it’s a little pricy, but if you have the money and want to get your nom on, why not?

Unfortunately, I don’t have pictures from this pop-up, but I’m hoping to get some next time.  Chef Rey Eugenio and his wife Julie do them every 2-3 weeks at Fadensonnen so I’ll make sure to take my camera.  I’m usually good about shooting first and eating later, but I was starving the night I went.  I got to try most of their menu, and everything was legit tasty but the ube cupcakes were my absolute fave.  I loved their pork mami and coconut red curry though!  Make sure you guys follow them on instagram to see when their next popup is.

I’ve been wanting to check this place out five-ever!  Located next to the Helmand in Mount Vernon, this intimate restaurant is everything and then some.  There are maybe 6 tables total so skip peak hours if possible.  It’s also BYOB so make sure you bring something to drink!  Alex brought red wine, and it was such a good call.

Everything we got was amazing, but the Larb Gai really stood out to me.  The flavors were out of this world, and in case you’re not familiar with larb gai, it’s basically ground chicken with lime, chili and fresh herbs – you wrap it in lettuce, and it’s basically the yummiest thing ever.  Note:  you gotta love your fish sauce though because the smell is pungent!  I personally love it because fish sauce is life, but you may not so consider yourself warned. 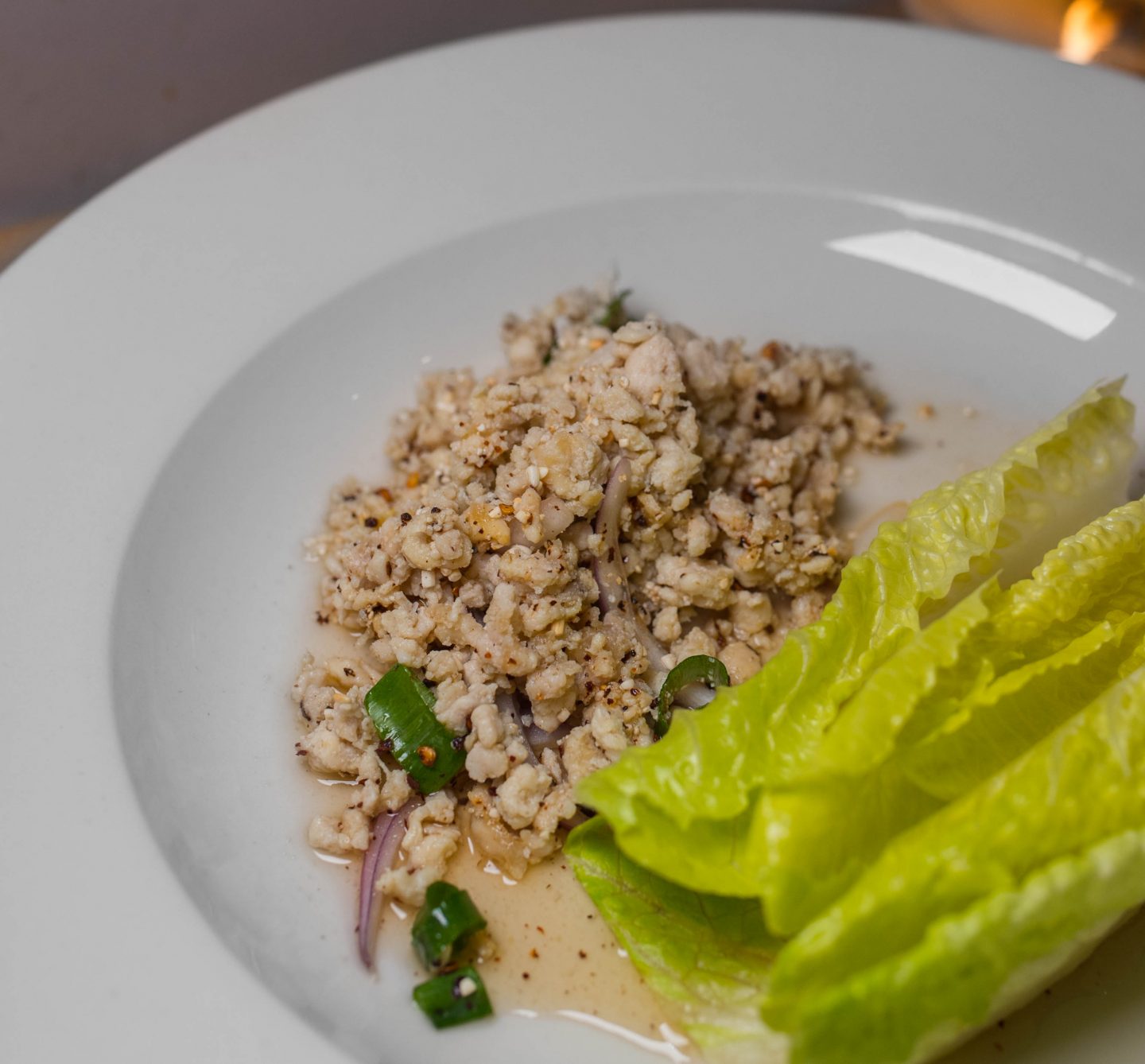 My pics are not to hot because it was pitch black, and again, I was starving but you can see a shot above!  Now, their lampang duck crispy rolls were phenom as well so I wanted to list them.  If you go to Khun Nine Thai, you definitely need to get them as well.  They come out pipin’ hot, perfectly crispy, with a dipping sauce so good you could cry. 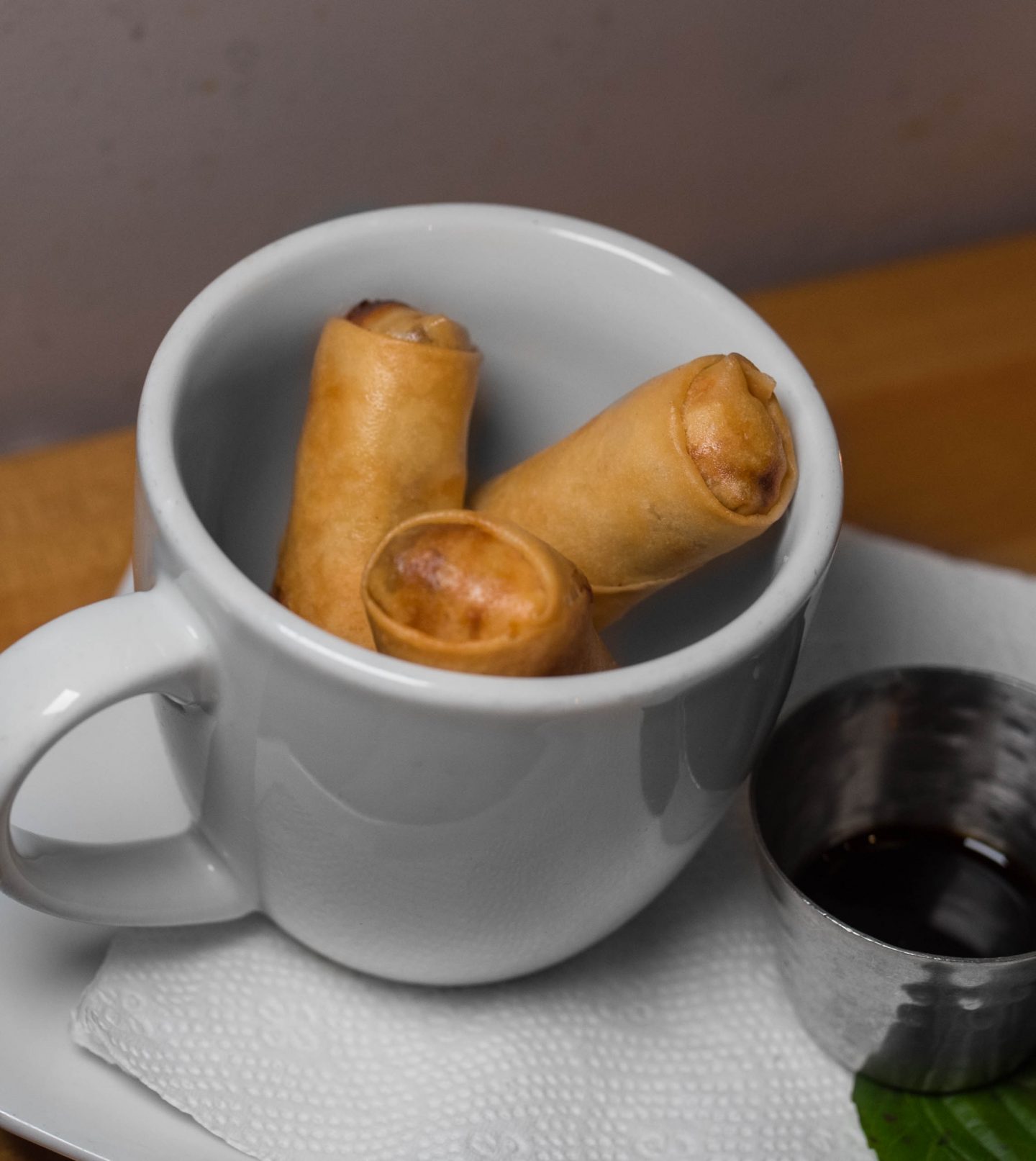 Anddd last but not least, their drunken noodz – these were good, but not as delish as the other two apps featured above.  Still solid though, like I’d definitely get it again.  FYI, they don’t have a spice rack here – I’m a sucker for sliced thai peppers in fish sauce – but they have ground chili pepper imported straight from Thailand so make sure you ask for it and sprinkle it on everything…if you can take the heat, ha.

This may quite possibly be my new favorite thai place in the area, but it’s a tough call because Mayuree Thai Tavern’s reallllllly good as well.  Where do you guys go for good Thai in the DMV area? 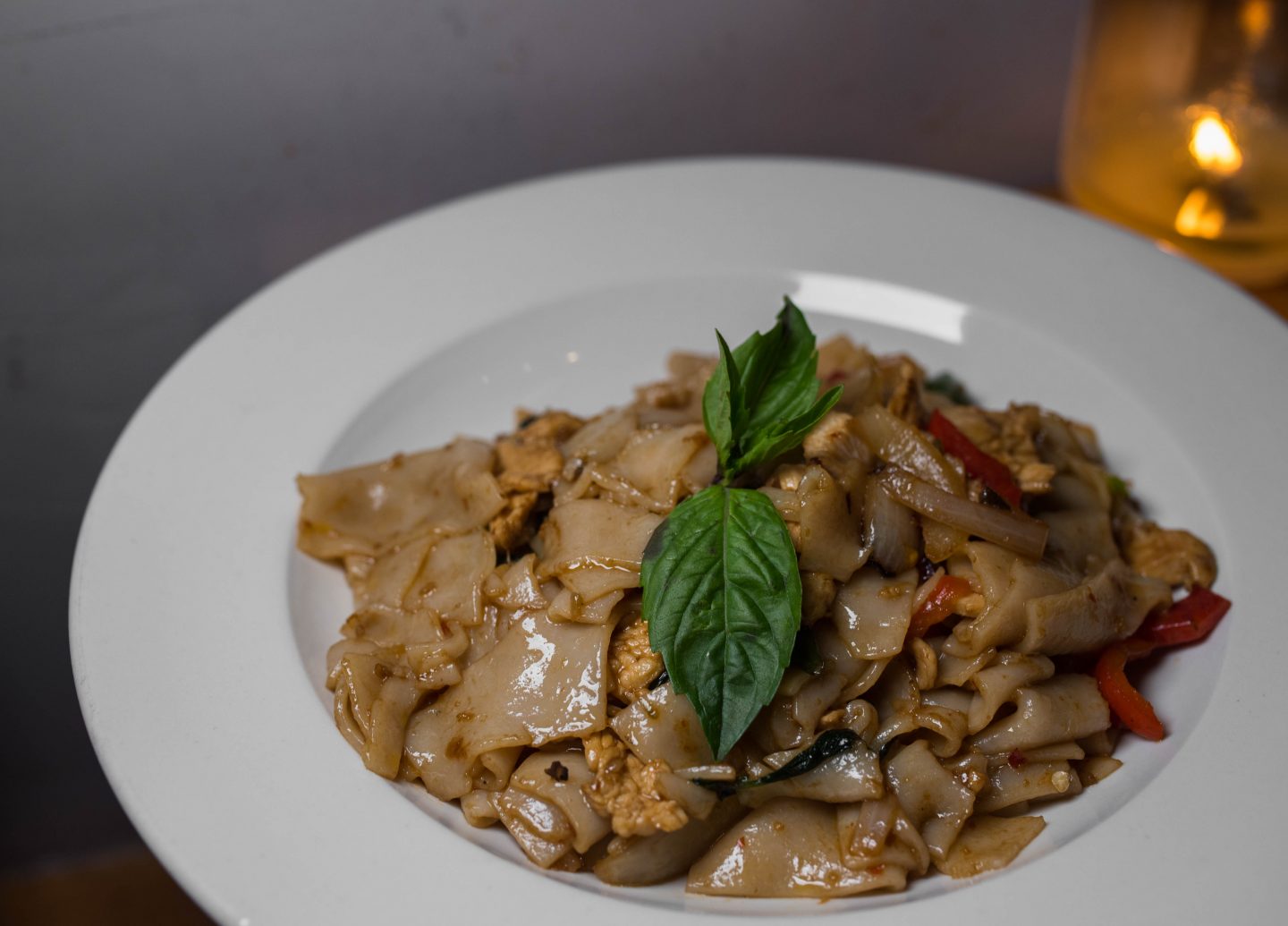 Alright guys, that’s it for today! I hope you liked reading about my current favorite eats in Baltimore.  Let me know if you have any favorites in the area so I can go get fatter, ha.  Until next time, friends!  For more on my DMV adventures, click here, to see more foodie stuffs, click here or check out my second blog, Nomtastic Foods.