SEE! I told you I’d do better with recaps.  They don’t really go from week to week, but that’s ok.  If you missed my last one, just click here.  Anywho, I’m really excited about this post so I’m not gonna waste any more of your time with this intro.  You guys are gonna want to read all the way through because I have SO much to tell you today.  So, without further ado, let’s get to it, friends!

I started the day off in Union Market with DC Refined.  I am a huge, HUGE fan of their digital publication so I was beyond excited to hang with Lauren Wainman, their bamf editor.  They write about all things lifestyle (from sports to city living) so definitely make sure you guys check them out!  Afterwards, I went home and studied for a few hours before heading out to Medieval Times – a  HUGE thank you to Maroon PR for the invite! 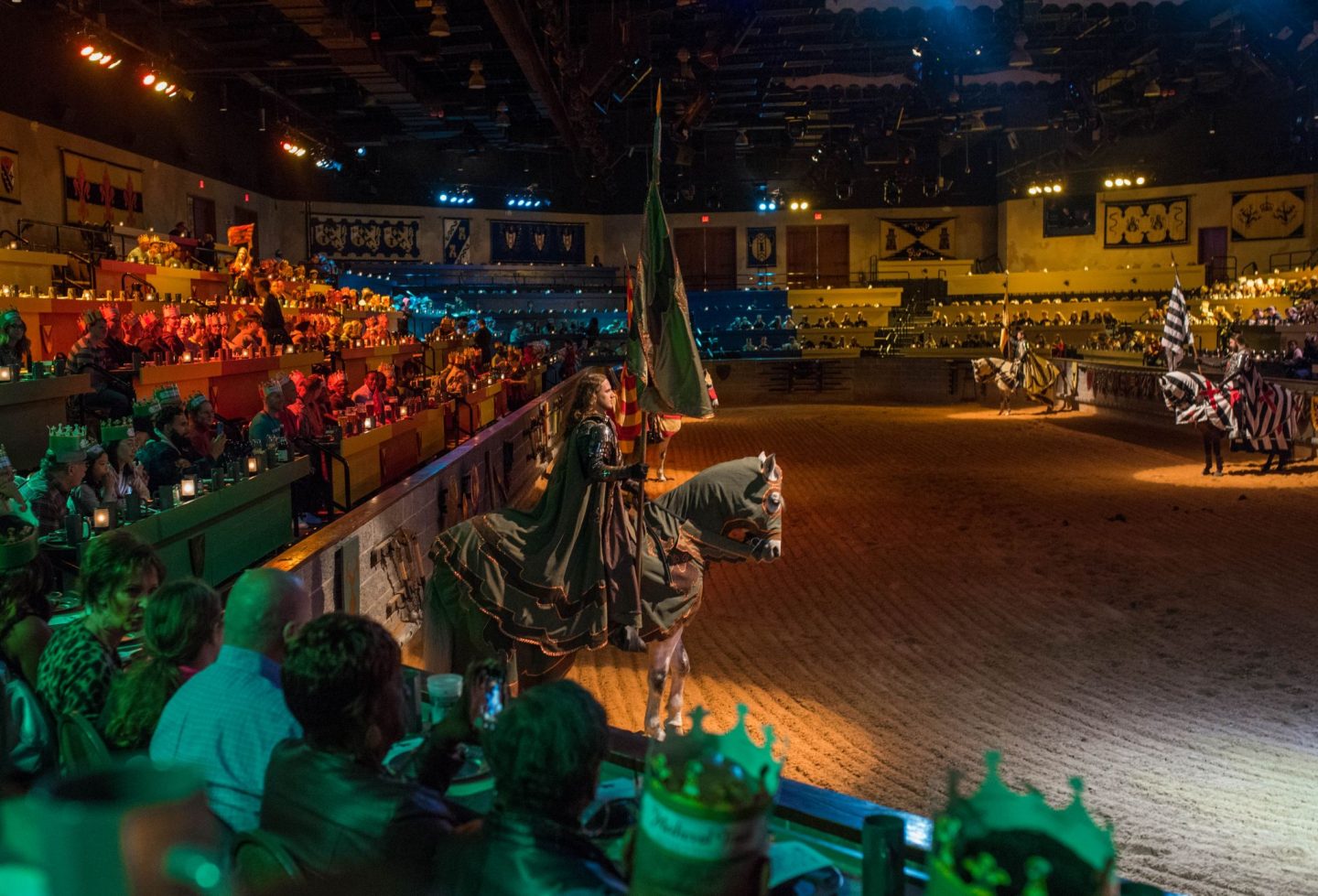 As you guys know, my mom was in town so I excitedly took her for dinner and a show.  Medieval Times is cheesy in the best way possible.  The servers all call you sir and my lady, and you have to eat your meal with your hands like in the olden days.  My mom smuggled in silverware, but I was a good sport.  The food was surprisingly good… unless you got the vegetarian option like me, lol.  That wasn’t the best, but everything else was tasty!  Here’s what came out:  a drink (I got diet pepsi), hummus with veggies, yummy garlic bread, a rice and bean stew (eh), a flavorful potato, buttery corn on the cob, coffee, and pound cake.  Everything was nomtastic minus the stew, BUT I hear the chicken is delish so you’ll be happy from start to finish if you go as a meat eater!  And honestly, they give you so much food anyway, you’ll be full even without the stew. 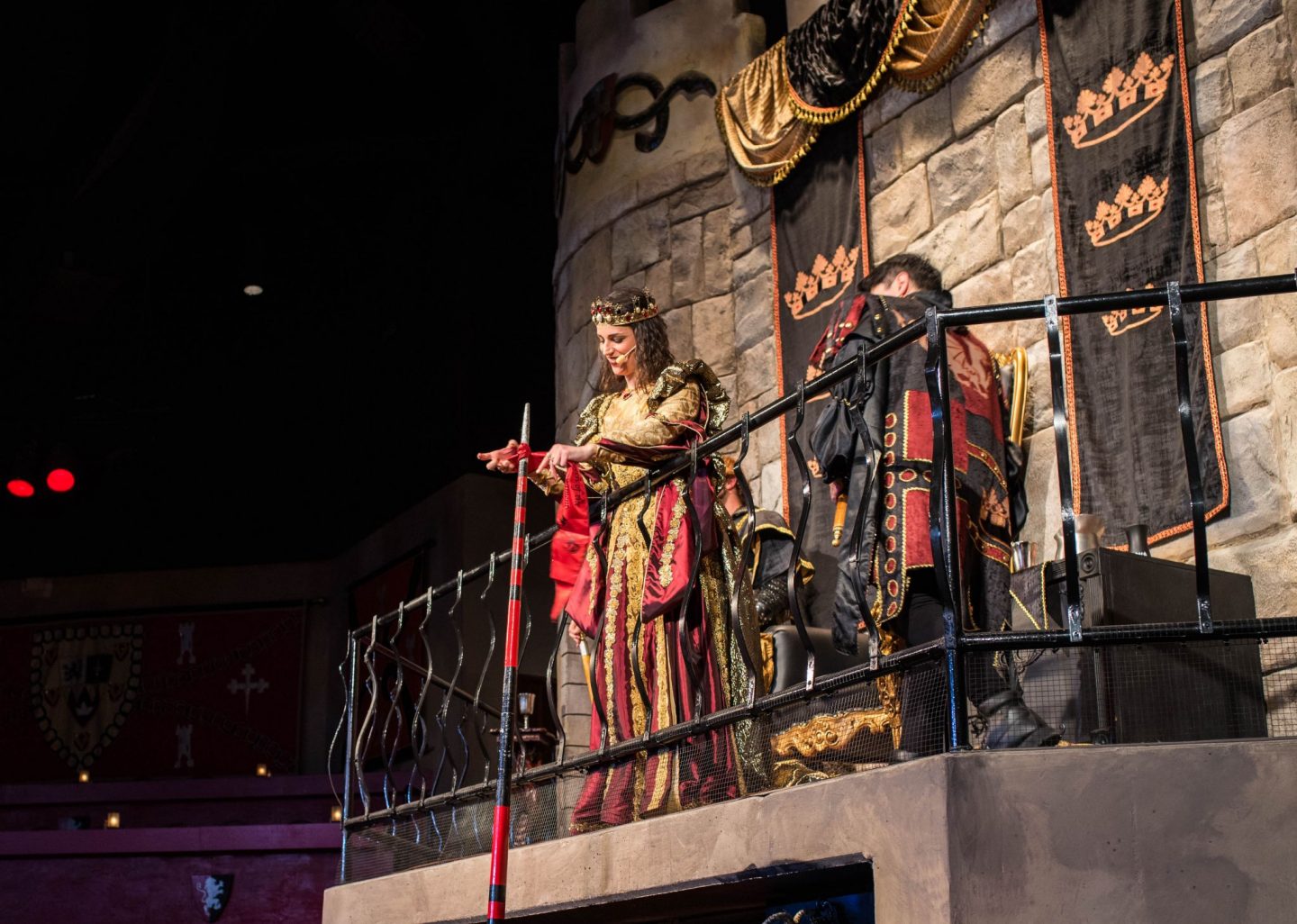 The show was entertaining, but the coolest part was *drum roll please* they no longer have a king, but a QUEEN (!!!!!) There was a stable tour + meet and greet with her afterwards, but I had a migraine so we ended up leaving earlier than anticipated.  I was also really sad that our knight – we were team green that evening – lost so that was a bummer, but my mom and I had a great time regardless.  We went to the location in Arundel Mills, but click here to find one near you! 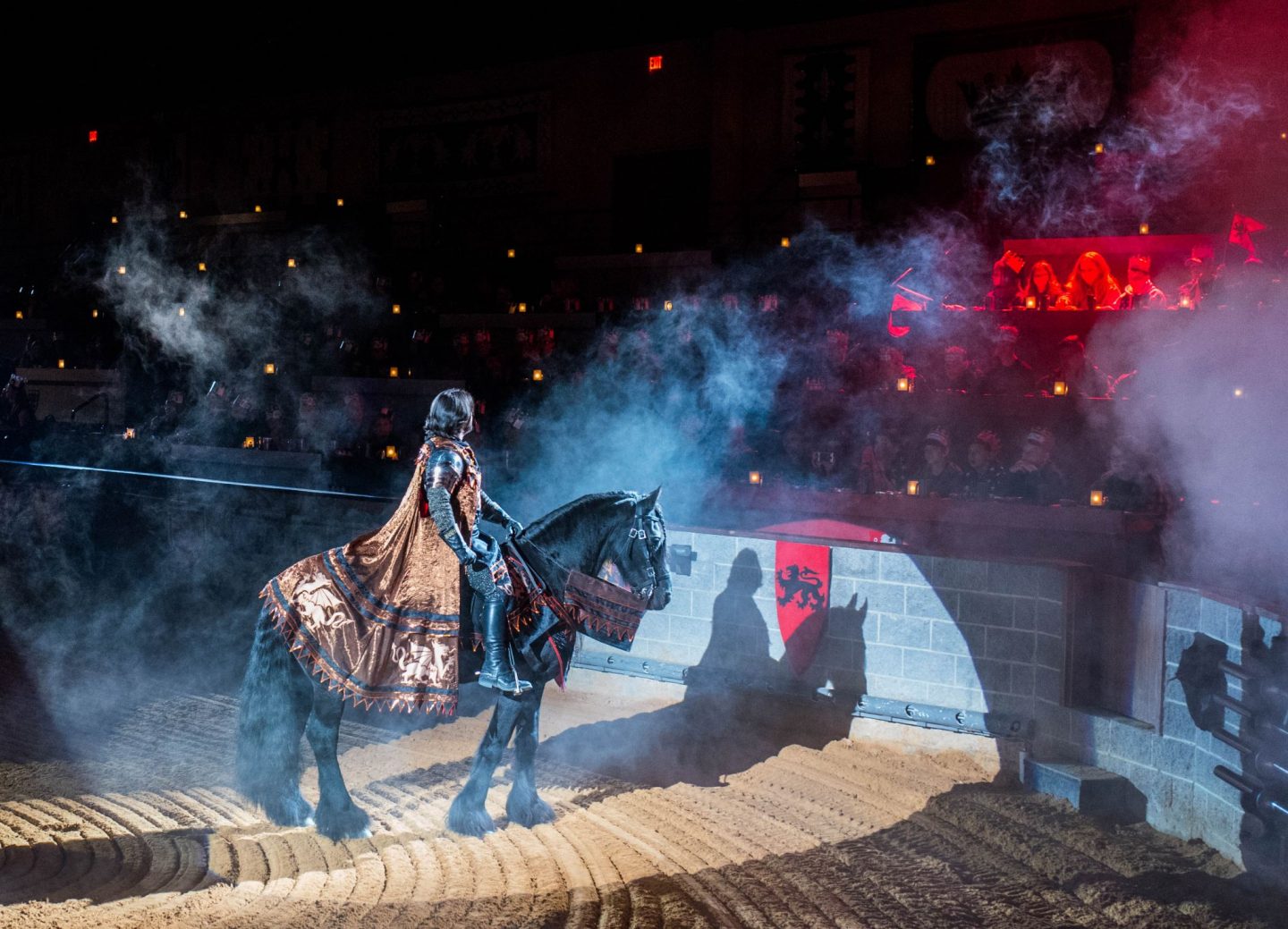 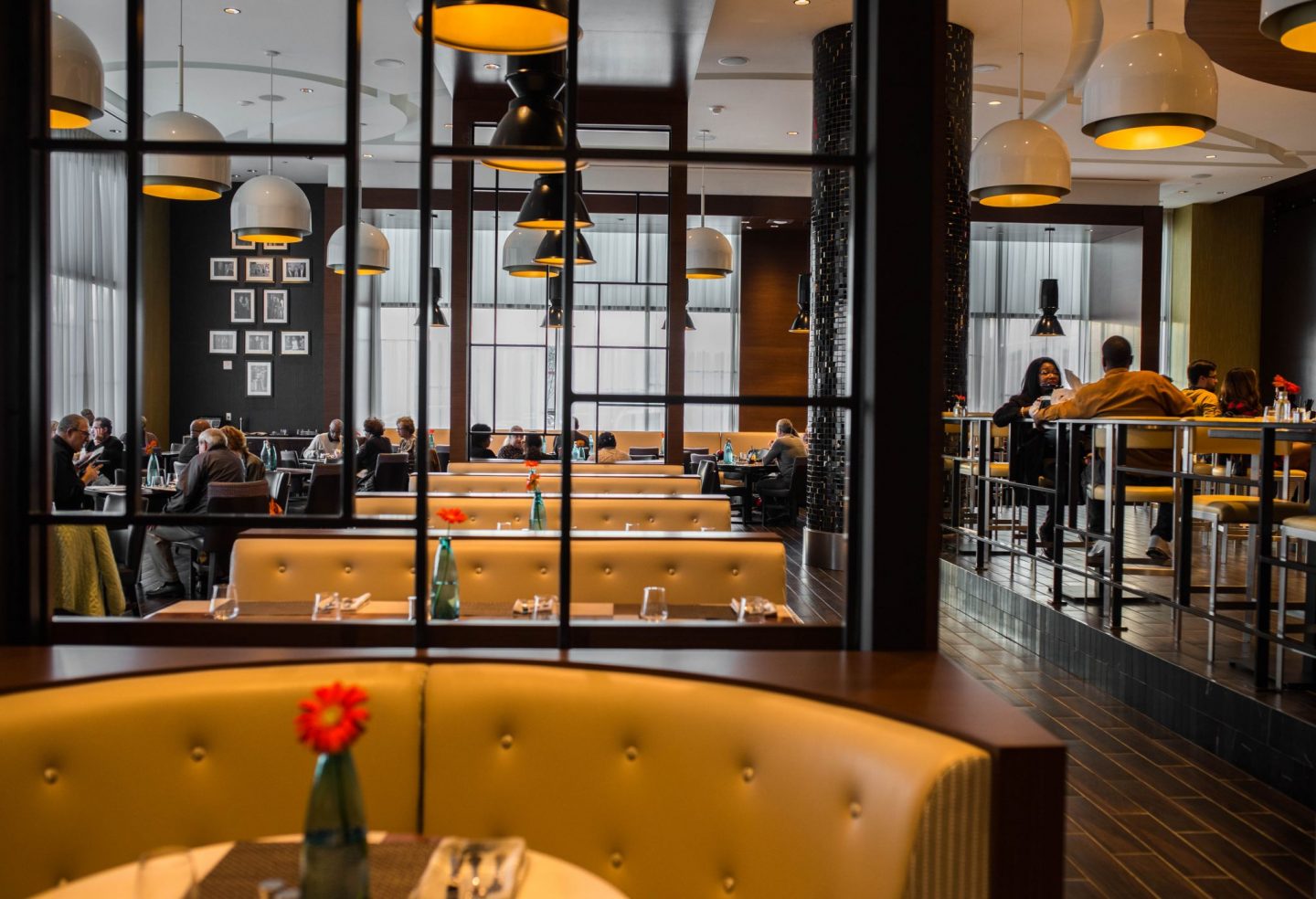 After a long day of teaching, all I want to do is pass TF out and rest, but that’s not really an option when Maryland Live invites you to dinner and a show.  Their new hotel is swanky, like S-W-A-N-K-Y! My mom and I met up with Sung and started our evening off with a delicious meal at David’s.  I went once before for a media event, but I’m really glad I got to go again because the food was MUCH better than I remember.  I was super impressed with the entire meal from start to finish, and I genuinely can’t wait to go back again.  We ordered a BUNCH of different plates, but I definitely had favorites.  Must-tries include their Skillet Cornbread ($10), Fried Mozzarella Stack ($11), Crab on Crab ($27), and Eggplant Stack ($16). 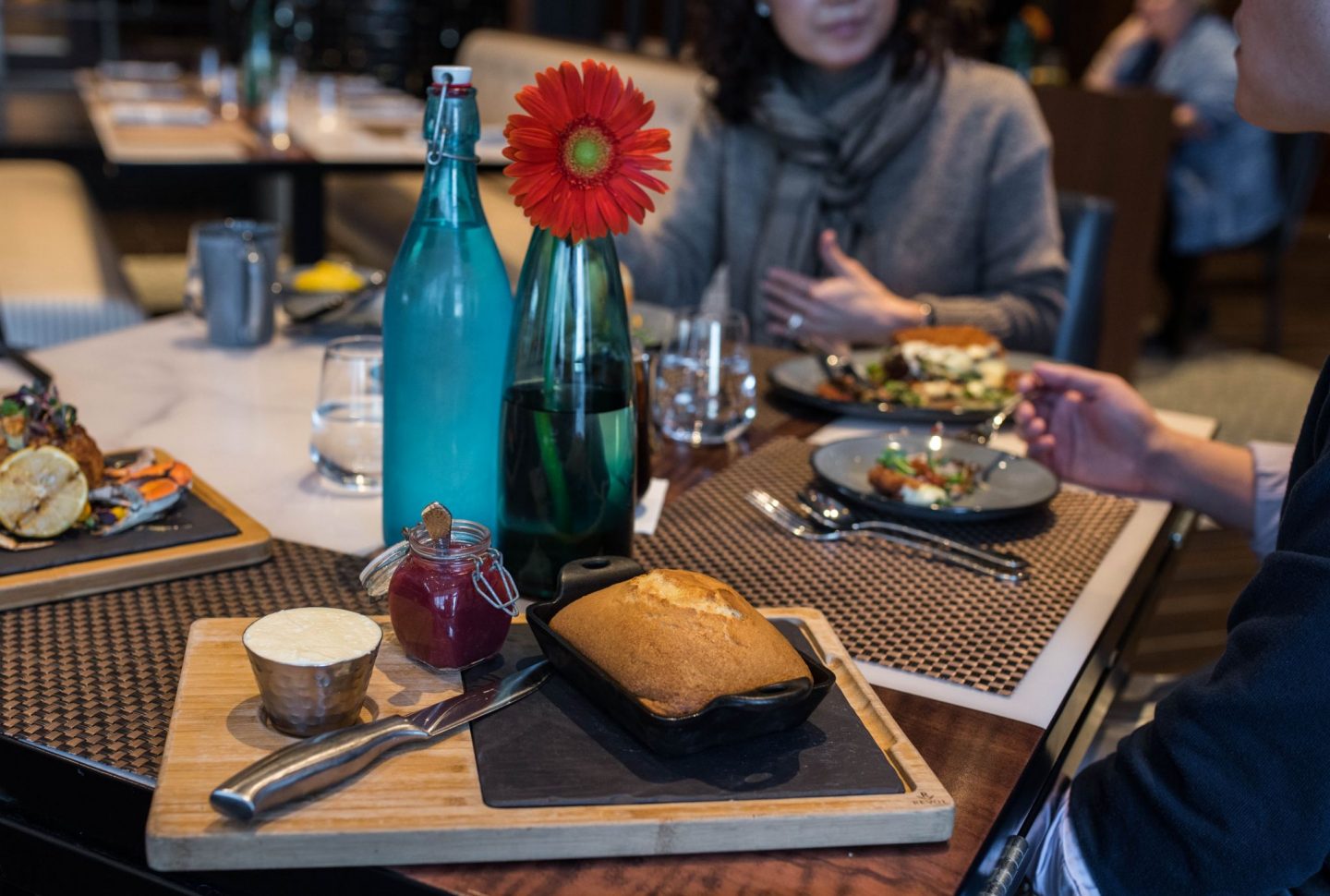 Honestly, the cornbread was one of the yummiest things I’ve ever had!!!!! I know that sounds crazy, but I could’ve easily eaten the ENTIRE LOAF all by my lonesome.  It came out piping hot and was served with honey butter and fresh strawberry jam.  I know I love carbs, but I wasn’t biased at all because everyone said it was obscenely delish.  In fact, both Sung AND my mom said it was the best cornbread they’d ever tasted so ha!

I love cheese so the mozz stack was obviously a must.  There wasn’t anything super unique about it, but that’s not on them.  I mean, it’s a mozz stack.  How creative can one get? I thought they did a brilliant job plating though, and I liked that they were thicker than regular sticks. 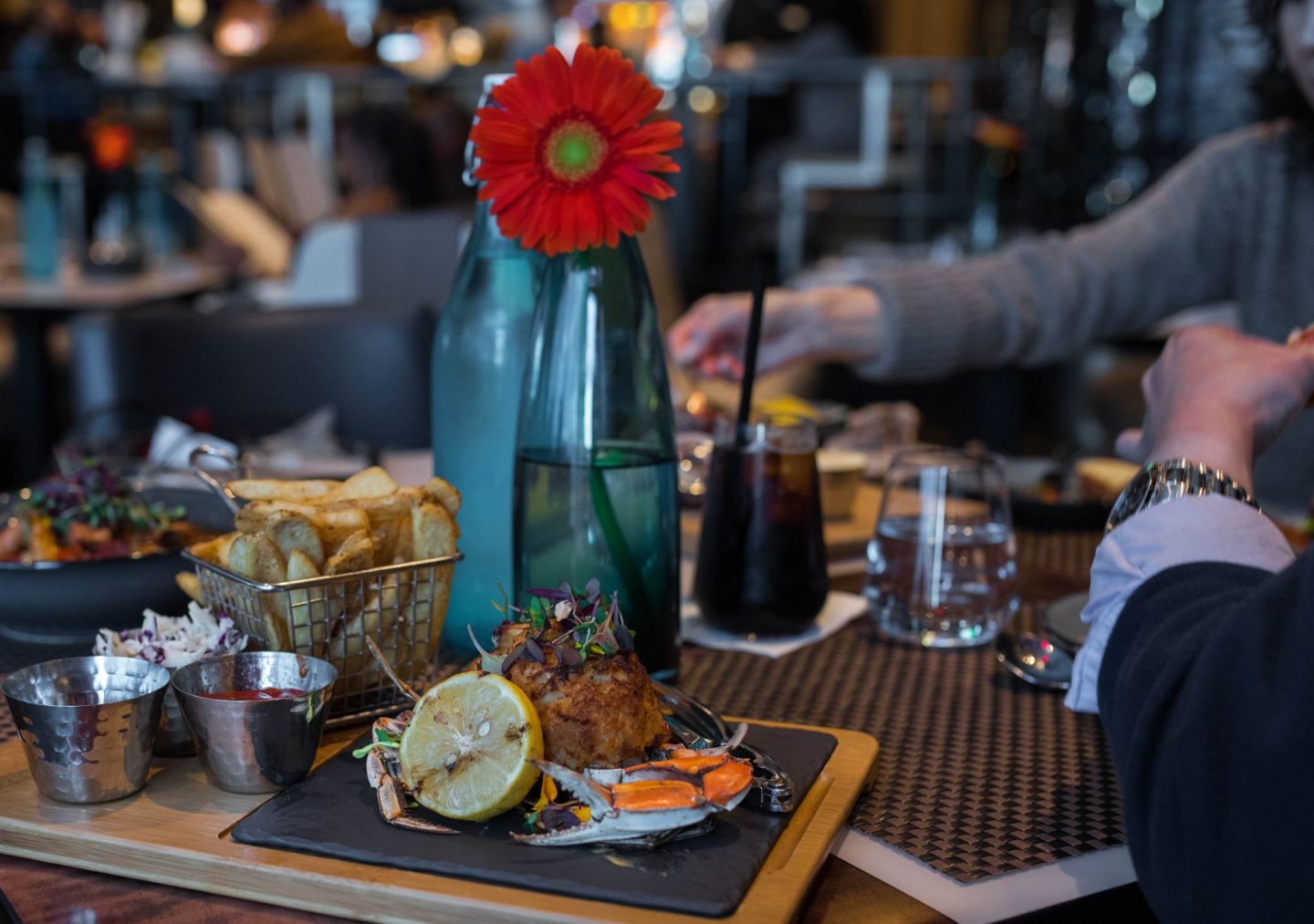 I’m vegetarian so I obviously didn’t get to try their crab cake, but it was a hit at my table, and the presentation was cool so I’m recommending it to you guys.  Also, their eggplant stack was solid.  It’s a dope veggie dish that everyone (including meat eaters) will enjoy so definitely put that entree on your list. 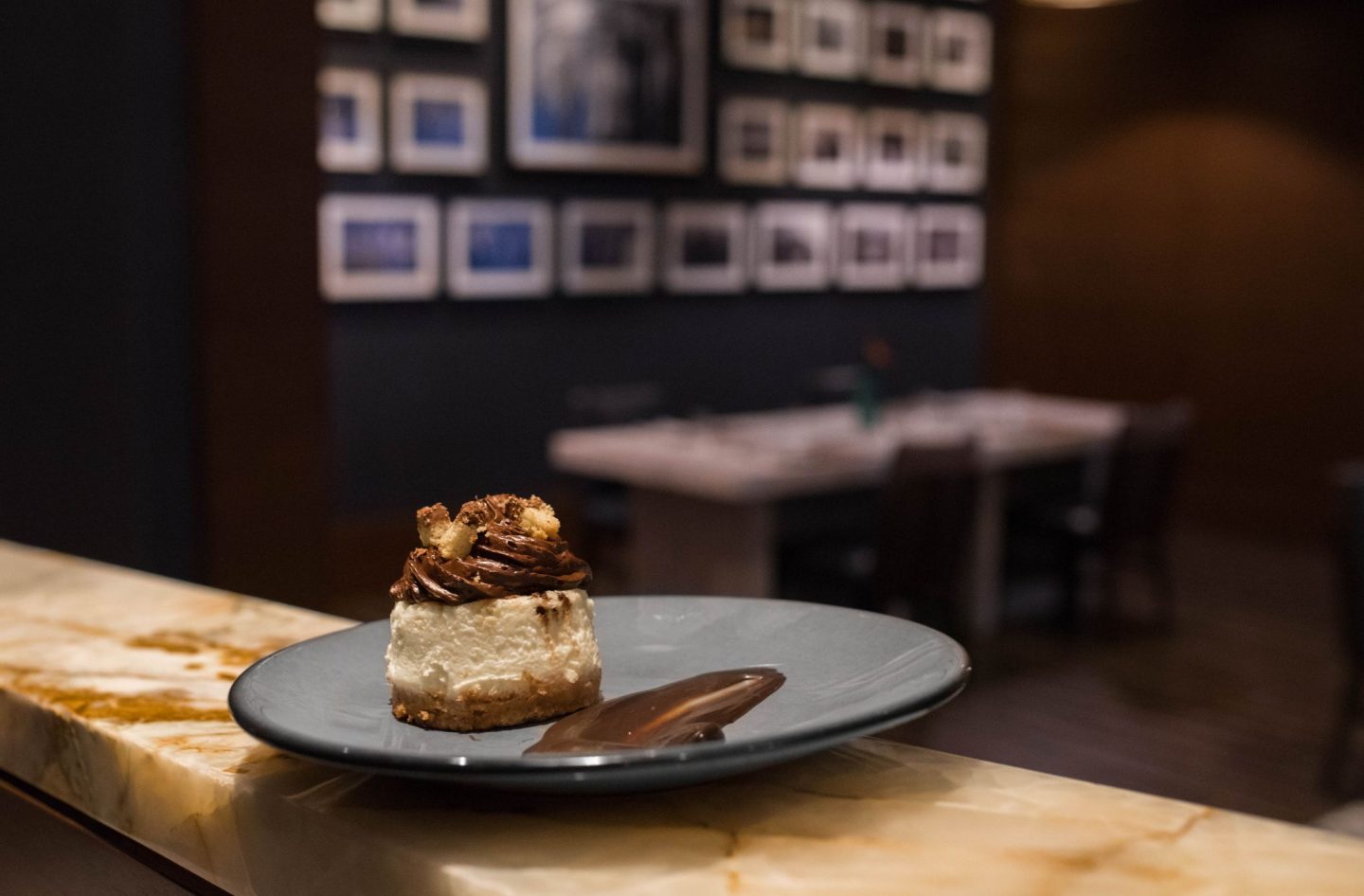 Andddd last but not least, their dessert.  I can’t even.  I honestly need to go back and try each and every one because their sweets were straight up ridiculous.  We got the Baltimore Cookie Cheesecake and the Chocolate Bourbon Pecan Tart and… no words.  Both were STUPID good so get there now and stuff your face.  You can thank me afterwards. 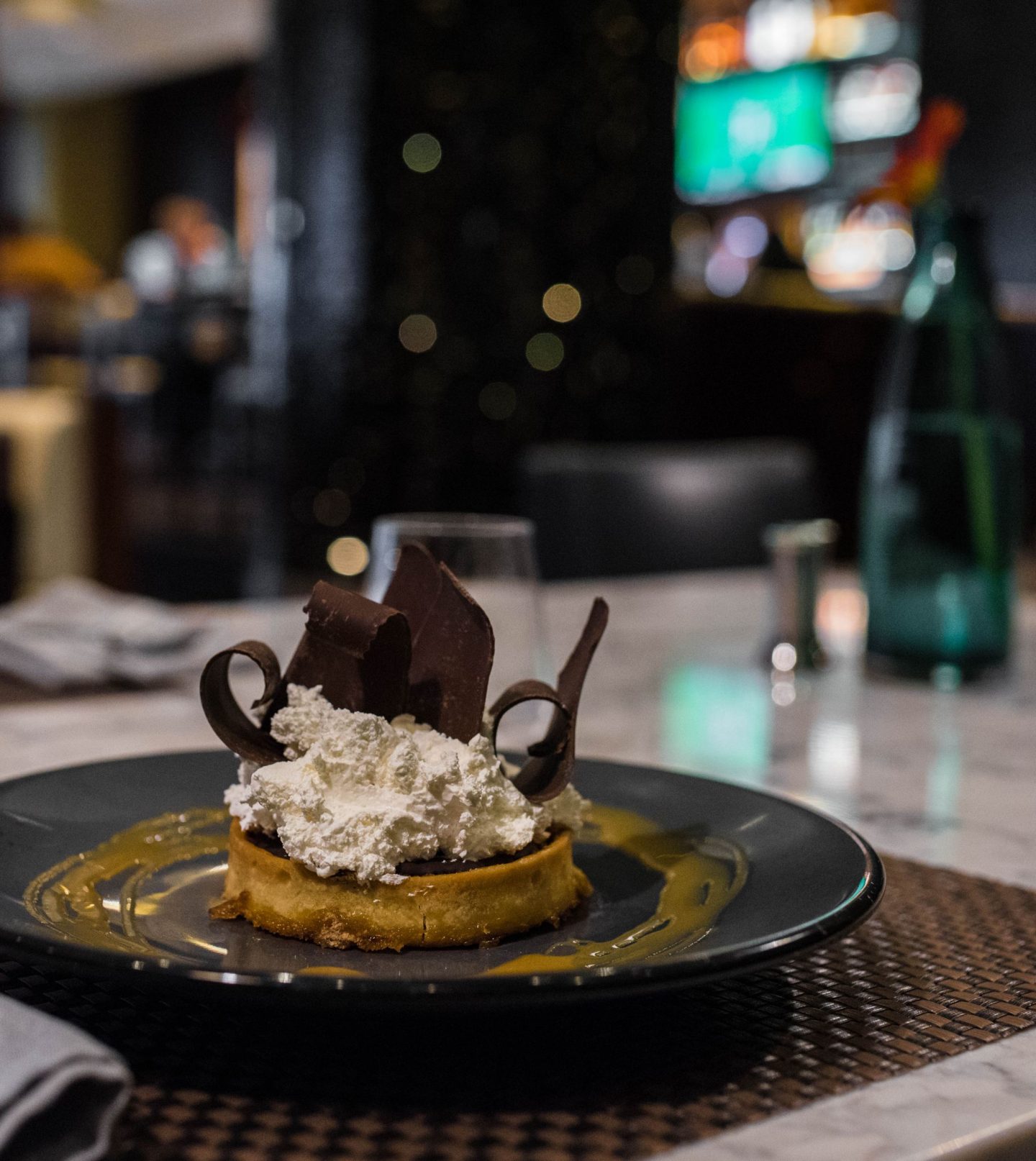 After noms, we took some pictures around the hotel before heading into a ginormous hall to see headliner Tracy Morgan perform.  I’ve loved his work for YEARS now – I thought he was brilliant in 30 Rock so I was beyond excited to see him.  The performance lasted for a good 2.5 hours (including opening acts), and I enjoyed every minute of it.  I honestly had no idea Live! Casino & Hotel’s shows were this good.  I had SO much fun, and I’m honestly pissed at myself for not coming sooner, like I laughed my butt of the entire night.  Anywho, I’m definitely planning on going back.  They have some huge names coming into town – what’s up, Patti LaBelle – so I’m excited!  What do you guys think of their lineup?  Click here to browse.

Sunday was a chill day.  I spent the morning working and then drove to Towson later in the afternoon to watch my students perform in the Preparatory’s annual Halloween concert.  Only a handful of my kids played, but those who did performed beautifully so I couldn’t be more proud.  The students all wore costumes so it was pretty much the cutest recital ever.  One of my students dressed up as Mozart (!!!!!!) so he pretty much won Halloween.  He had a wig and EVERYTHING!  The school has a nice reception afterwards so everyone munched on cookies and snacks while socializing.

Afterwards, my mom and I went to H Mart to do some grocery shopping and then hit up Hunan Taste for takeout.  We got two dishes to go:  mapo tofu sans meat and beef with hot mountain pepper.  If you’re looking for good Chinese food in the area, definitely hit them up.  Their food is second to none, and I’d honestly eat it every day if I wasn’t worried about getting fat, lol.  Are you a fan of Chinese food?  If yes, do you prefer American style or authentic Chinese like me? 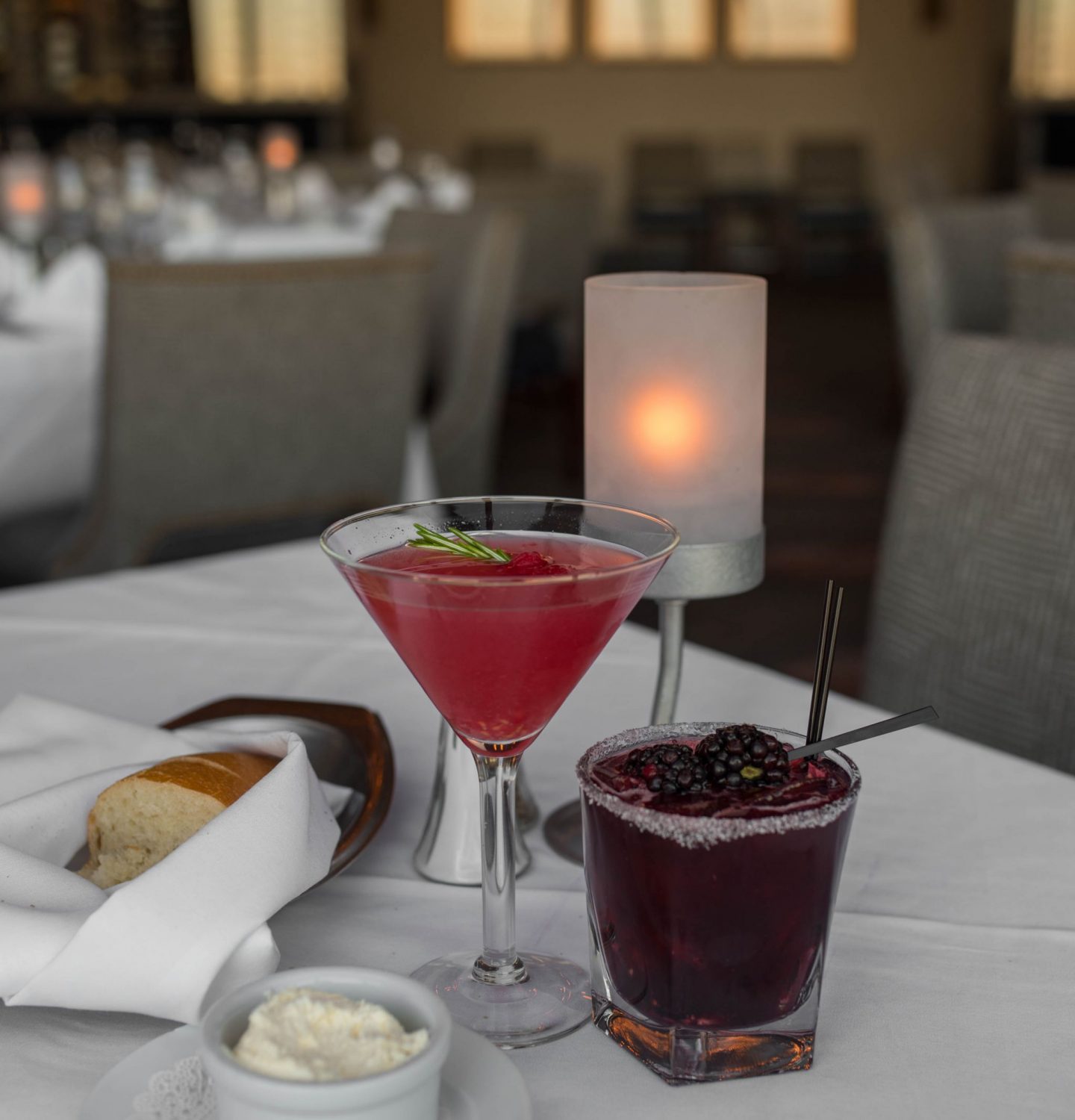 I love spoiling my mom whenever possible so when Foodie Tribe x Ruth’s Chris hired me to go shoot for them, I obviously took her as my +1.  We checked out their location in Arlington, VA and we were seriously impressed by the decor and ambiance – ermergerd the view was amazing.  The service was impeccable as well – definitely make sure you ask for Josh when you go.  He was absolutely WONDERFUL!  As usual, we ordered a bunch of different plates to photograph and sample – here are standouts: their butternut squash soup, their tomato and mozzarella salad, their filet mignon, their raspberry rosemary cosmo, their potatoes au gratin, their cheesecake and their creme brûlée. 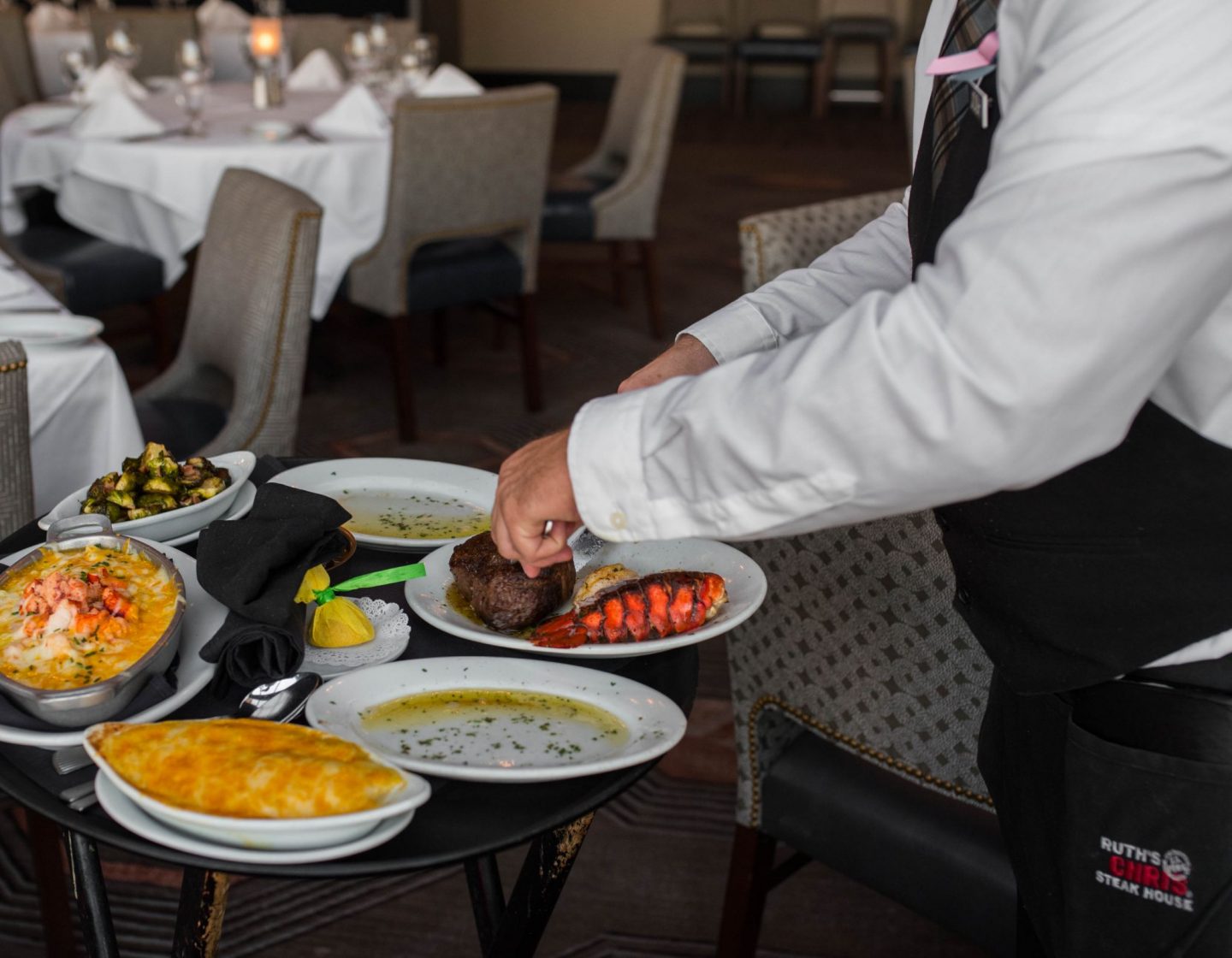 …yeah, we liked a lot. The soup’s seasonal so make sure you guys get there sooner than later.   It was quite possibly the best squash soup we’ve ever tasted so run, don’t walk.  The tomato and mozz salad was basic but delicious!  It was dressed to perfection, and they gave us a generous amount of cheese.  I didn’t get to try the steak, but my mom said it was melt-in-your-mouth good. 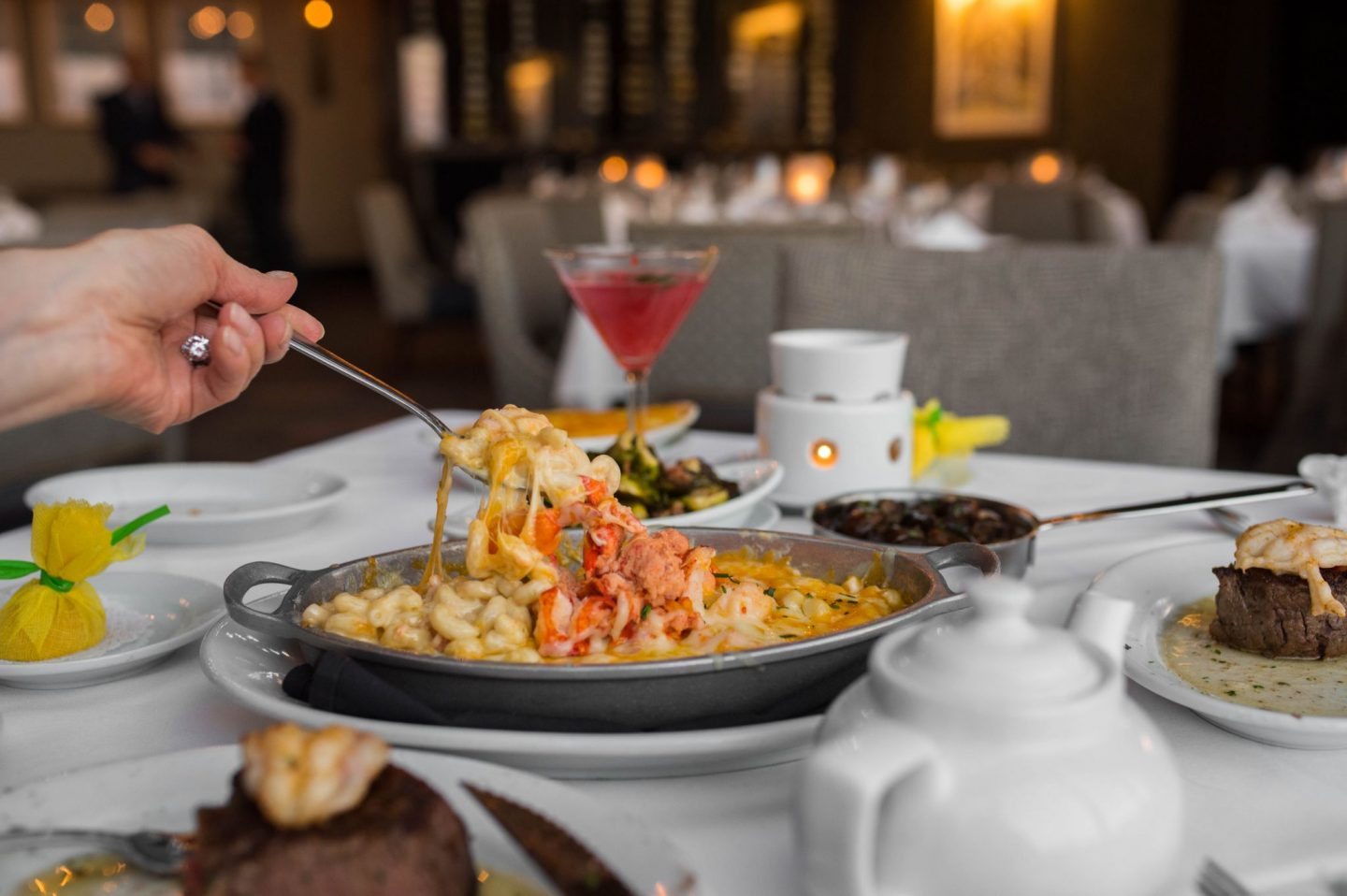 The drink was girly, but I like girly so this was a big do in my book.  I can’t really take super strong cocktails so this was a great option for me.  The potatoes were SUPER cheesy so obviously those were delish by default, and their desserts were stupid good.  We’ve really been lucking out in the sweets department as of late.  The creme brûlée was straight up magical, like it was honestly the BEST creme brûlée I’ve ever tasted.  Plus, it was ginormous yet affordably priced so it got an A+ from me.

I absolutely love hanging out with cool peeps and getting to know them better so brekkie with Clara Pino was a fun time for sure.  We met up at the new First Watch in Columbia and munched on noms while we chatted.  She works for an awesome PR company in Charm City called Maroon PR so I see her at their events from time to time, but it’s been a while so I was excited to catch up!

Afterwards, I went home to practice, do work and then prep for my photoshoot with the talented Jan Galvan (one of my fave Baltimorean photographers).  We met up at Rawlings Conservatory and shot two outfits outside.  The sun’s been going down quicker so we were fighting light but hopefully we got some good shots!  Anywho, that’s a wrap for today, guys.  I hope you enjoyed reading about my latest adventures.  I have a TON of stuff planned next week so definitely make sure to follow along via stories.  Hint:  there may be some traveling involved (!!!!!)