A few weeks ago, my bf and I hit up City Perch in Bethesda for dinner, and I’m beyond excited to tell you guys about our nom highlights.  Located next to AMP and iPic theaters, it’s a great place to grab apps and/or drinks before heading to whatever show you’re there to see.  So without further ado, here’s what you should get: 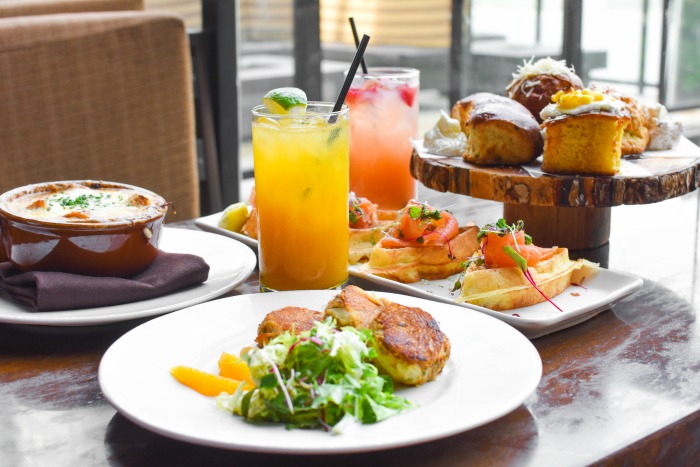 Drinks (range from $9-20): … I honestly can’t remember what these were called, ha.  I believe we got the Mandarin Mule and Norma Jean, but I’m not 100% sure!  Their cocktail menu was extensive so we had a tough time choosing – and now everything’s kind of a blur – BUT it all sounded delish.  I’d definitely go back for happy hour (daily 3-6PM featuring cocktails, wine by the glass, and craft drafts) because these were amazing! 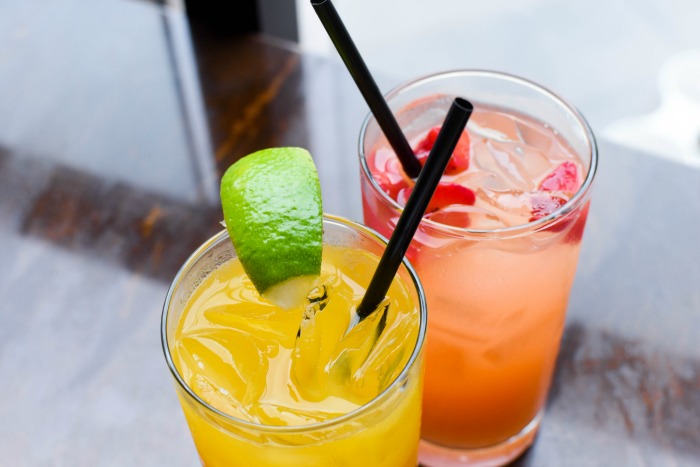 Bread Board: I can’t even. This was, hands down, the highlight of the evening.  I’d seriously go back to City Perch just to have their cornbread again.  How’s this for foodporn? A cayenne + parmesan popover with smoked sundried tomato butter, honey-dipped corn bread with whipped goat cheese drenched in wildflower honey, a butter bun with whipped Trickling Springs butter + sea salt, and an orange sage biscuit served with maple bourbon pecan butter.

…yeah, I may or may not be drooling right now.  If you aren’t, I don’t even know what to think, ha!  In all seriousness though, everything was ridiculously tasty, but my faves were the cornbread & popover.  I would’ve happily eaten cornbread all night long, but I had to save room for the various dishes we ordered. 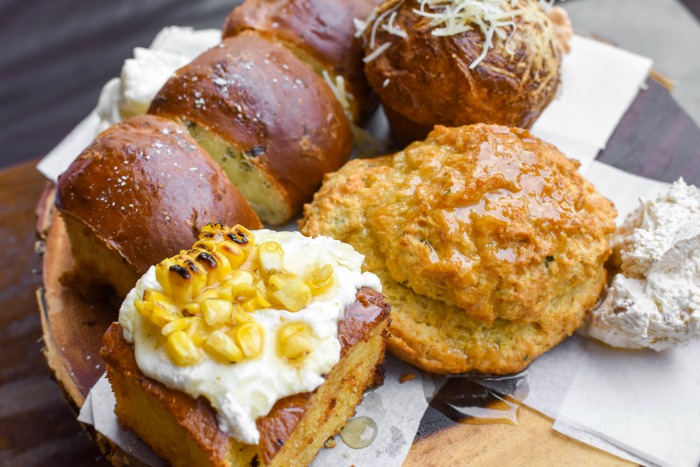 French Onion Soup ($10):  This isn’t pictured here, but it’s DEFINITELY worth mentioning!  I’m hella picky when it comes to this soup because it’s one of my go-tos, but City Perch did a truly solid job with this dish.  Enriched with braised beef short rib, gruyère + white cheddar gratin, the flavors were spot on even after sitting for a good 20 minutes or so while I took these shots.  This baby gets 5/5 stars! 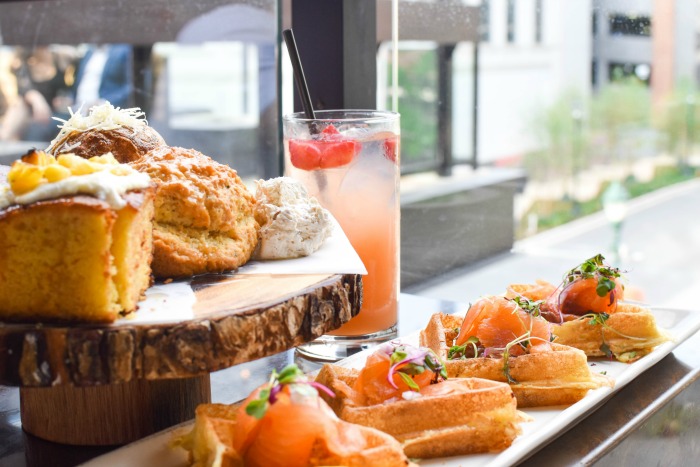 We also tried the “everything” waffle ($16) and the brioche-crusted Maryland blue crab cakes ($18). The former featured Norwegian smoked salmon, dill crème fraîche and salmon roe, and the latter came with old bay remoulade and a frisée + citrus salad topped with yuzu vinaigrette.  I don’t eat fish so I didn’t get to try the waffle, but I had the crab cakes and they were fine – not bad but definitely not worth $18 to me. 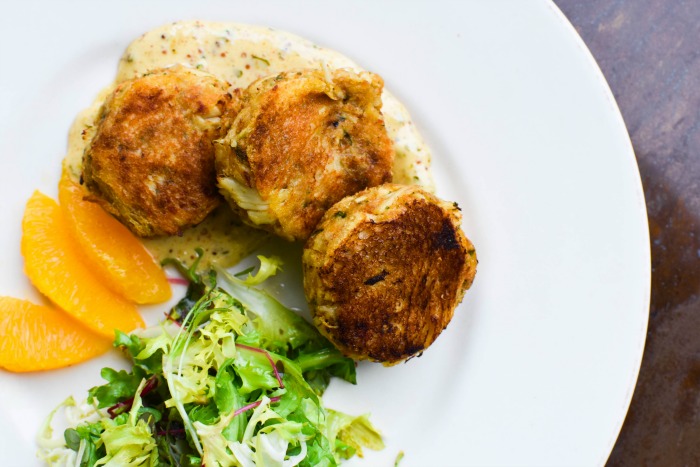 Mac + Cheese ($8):  fun fact, if I see mac + cheese on a menu, I will order it 99.99999% of the time! If I don’t, it’s either because I’m not feeling well or I’m already food coma’d out.  CP met my (extremely high) standards and left me completely and utterly satisfied!  Made with farmstead artisanal cheeses + bacon crumble, this gooey goodness is all sorts of yum. 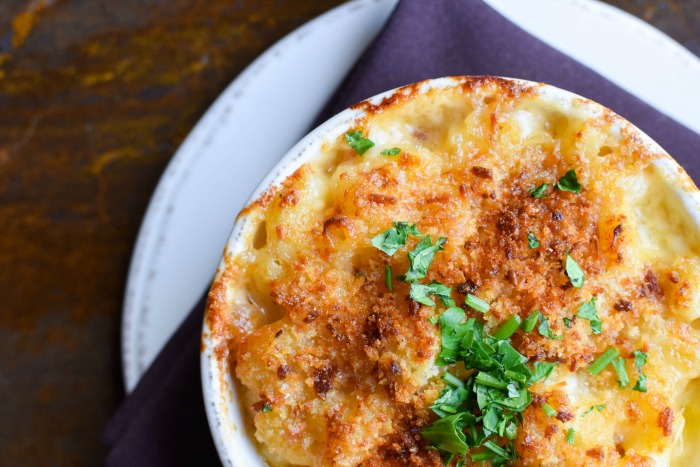 Roasted Long Island Duck ($28):  Very impressed with the flavor and tenderness of the duck!  It came with rolls + pickled goodies, which was fine but kind of misleading because the menu said it’d be served with southern-inspired fixings? I don’t know about you guys, but when I think of southern fixings, I think mac n’ cheese, collard greens or baked beans, but maybe that’s just me? The rolls were good because CP apparently can do no wrong when it comes to carbs, but the pickled stuff was “eh.”  I’m still a fan of this dish though! 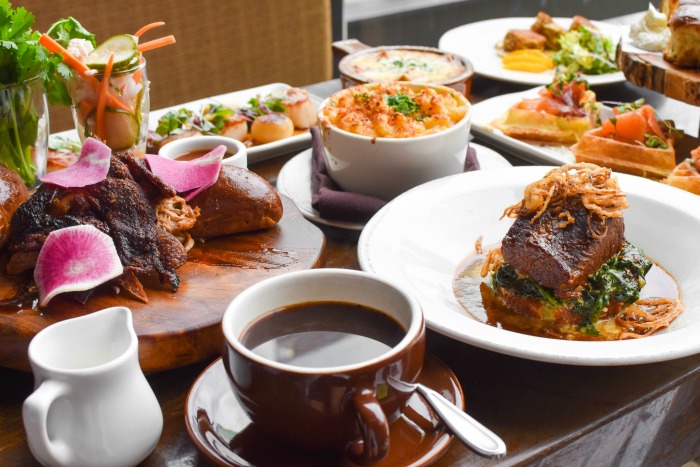 I felt like there was TOO much seasoning going on in general with these two plates!  I would’ve appreciated a “purer” flavor if that makes sense, like I want my sauce to complement and enhance the natural flavor, not mask it.  I do give them props for cooking the scallops perfectly though – they were seared beautifully.  The beef was pretty good but definitely order the duck if you’re craving meat! 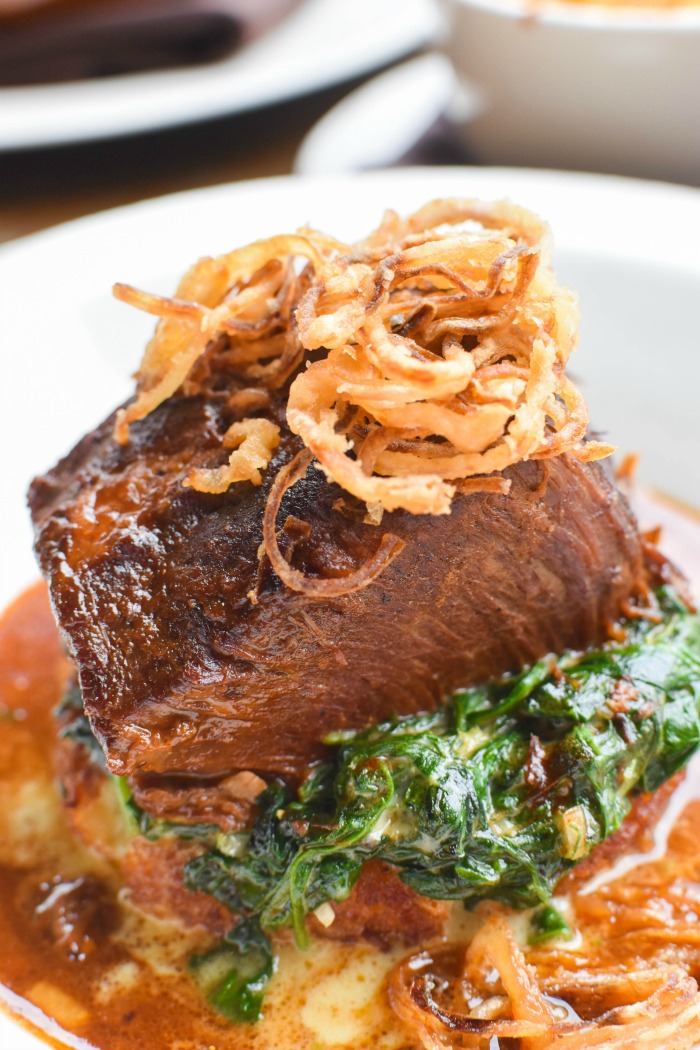 We were completely stuffed by this point so we passed on dessert, but I’d be down to go back to City Perch again.  Order their magical bread tray and nibble on their mac n’ cheese, which is big enough to be an entree by the way! Soooo much yas.  They also validate parking for up to 3 1/2 hours which is AWESOME!  For my non-dmv friends, they have locations in NJ and NY if you’re interested in trying their noms.  For more foodporn, click here.