I hope you guys aren’t getting sick of my food posts because I still have so much to share!  During my recent trip to SF, Robby and I decided to explore San Jose because I’d never been.  It was only an hour away, but the weather was shockingly different – SF was chilly and SJ was warm, like DC warm.  Anywho, we hit up a bunch of different restaurants while we were there so I have a lot to say.  So, without further ado, let’s talk about the good, the bad and the ugly!

Located on 1816 Tully Road, Bubbly Teahouse is part of an asian plaza.  It was kind of grungy, but I really liked their tea so I would go back if I was in the area.  I think they’re currently in the process of changing the interior because half the space was boxed off.  We didn’t really care though because we just got our drinks and left.  They have two game consoles set up on the side so this could be a fun place to bring your kids or hang with your friends, depending on your age, lol. 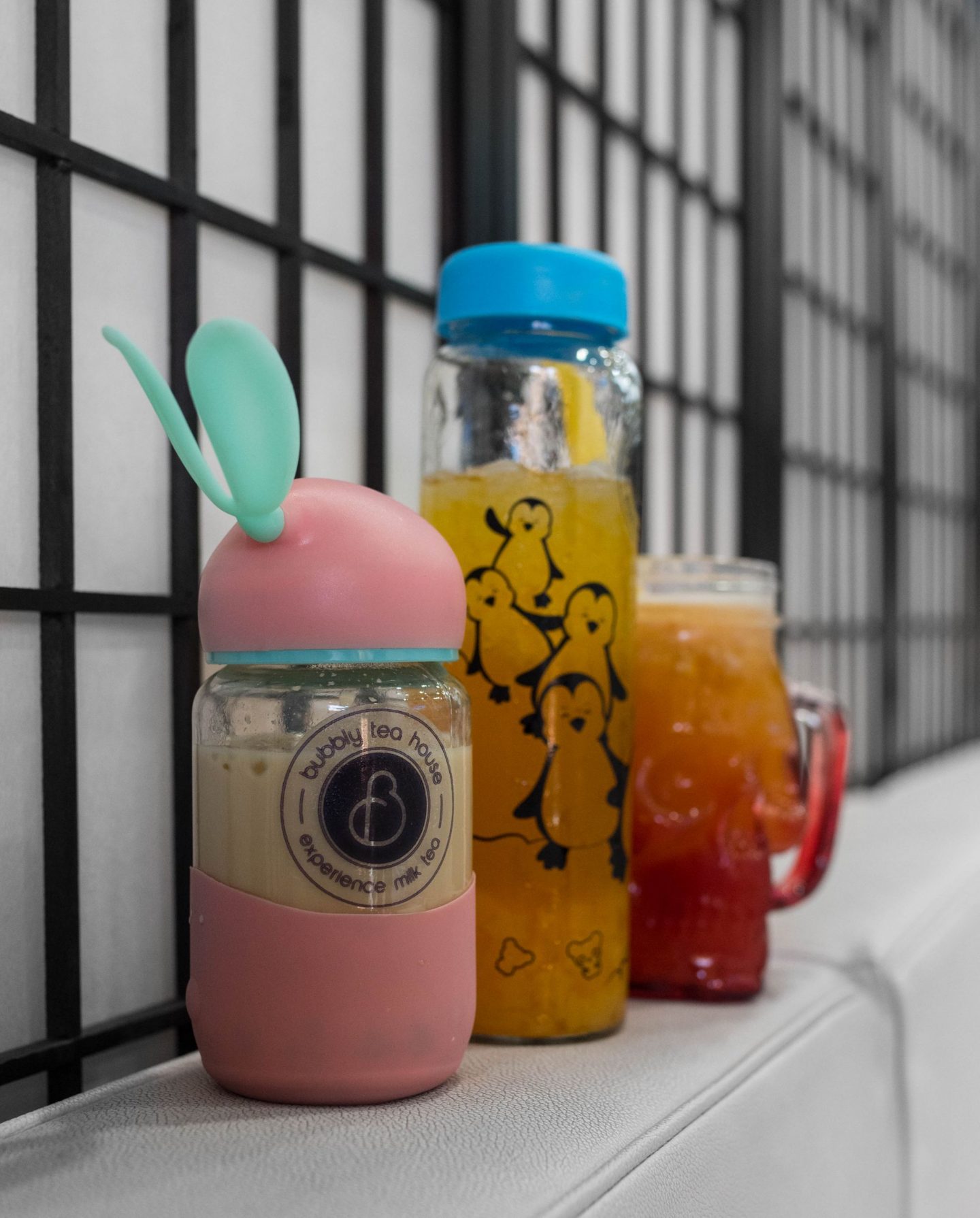 We got three different drinks and shared:  their Bubbly Me (special oolong milk tea) with boba instead of flan, their Peachly (jasmine green tea with peach, mango, pineapple syrup and mango jelly stars), and their Lychee Freeze (jasmine milk tea with lychee syrup, black pearls, and lychee bits).  All three were good, but my favorite was the peach.  The lychee was a close second though!  Note: everything’s made with 75% sweetness so keep that in mind when ordering – if you want them to use less sugar, just let them know beforehand. 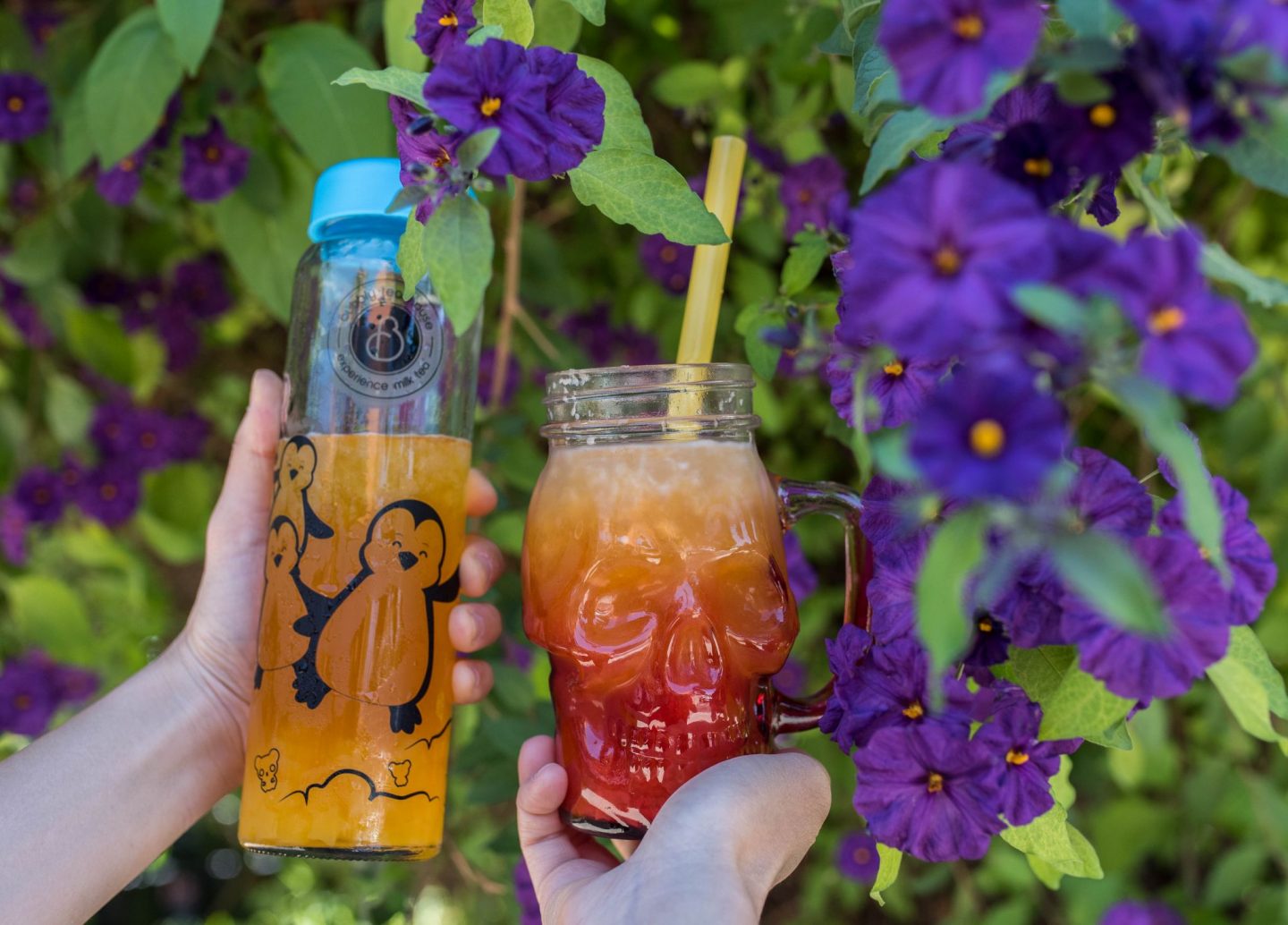 I also REALLY loved the bottles and cups they used.  The tall one came with our drink free of charge, but the other fancier cups were extra $$.  I collect cool cups and mugs so I obviously couldn’t resist!  So, should you visit Bubbly Teahouse?  Yes, definitely give their fruit teas a try, and let me know what you think afterwards.

Ice3 Creamery was about a 10 minute drive from Bubbly Teahouse.  We found them on instagram and wanted to stop by because their desserts looked good!  Located on 4750 Almaden Expressway, this ice cream shop was also located in a plaza…a substantially cleaner plaza, lol. 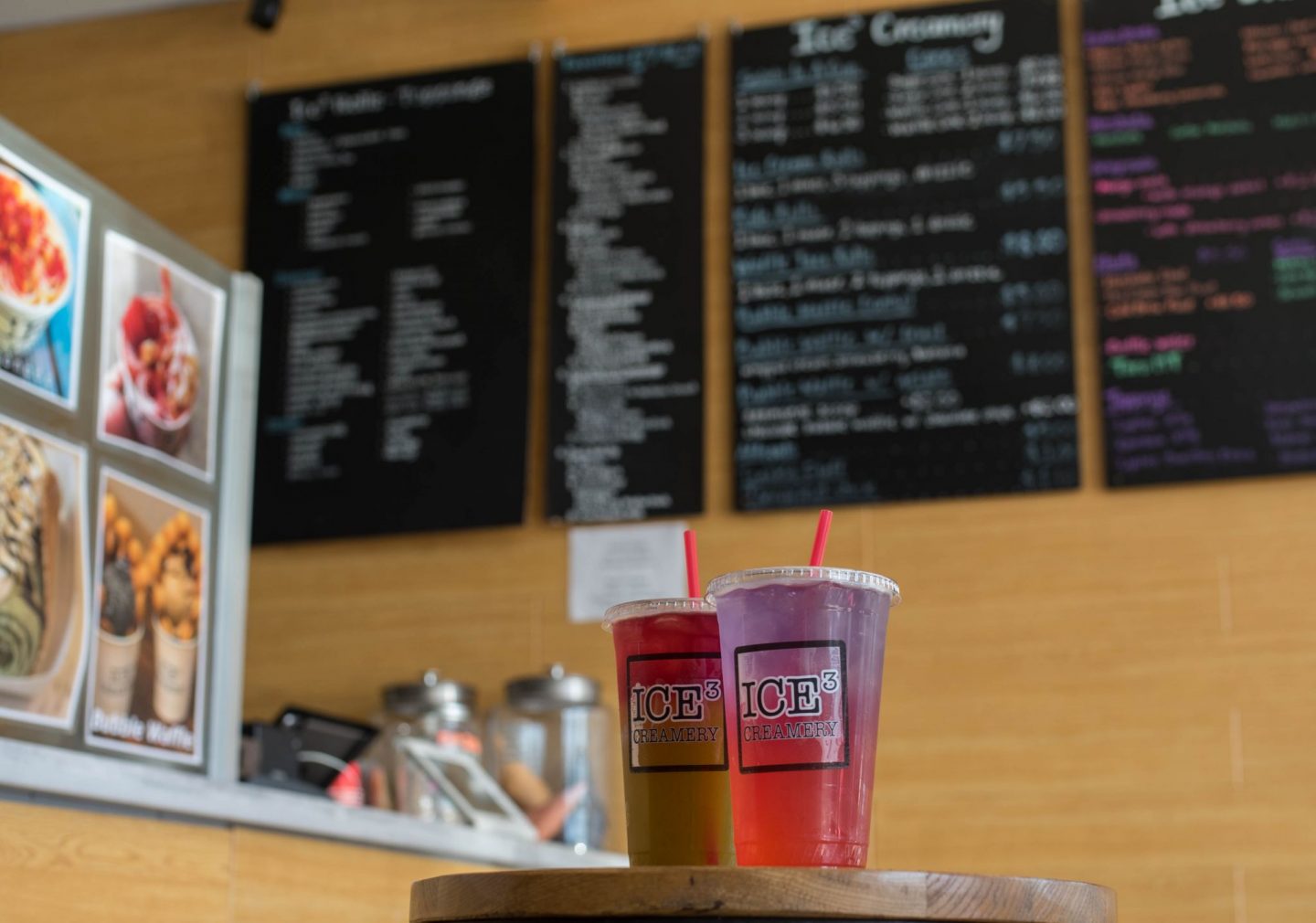 They make their gelato in-house, and we got four different flavors:  vanilla, dulce de leche, oreo and black sesame.  Vanilla, oreo and black sesame were just ok, but the salted dulce de leche was phenomenal.  Robby and I totally flipped out over it! We were super impressed with the flavor and consistency, and it went so well with their chocolate bubble waffle.  It’s an extra $2 to get chocolate instead of vanilla, BUT I’d get it again regardless.  FYI, a regular bubble waffle with gelato is $8, and two scoops is $10. 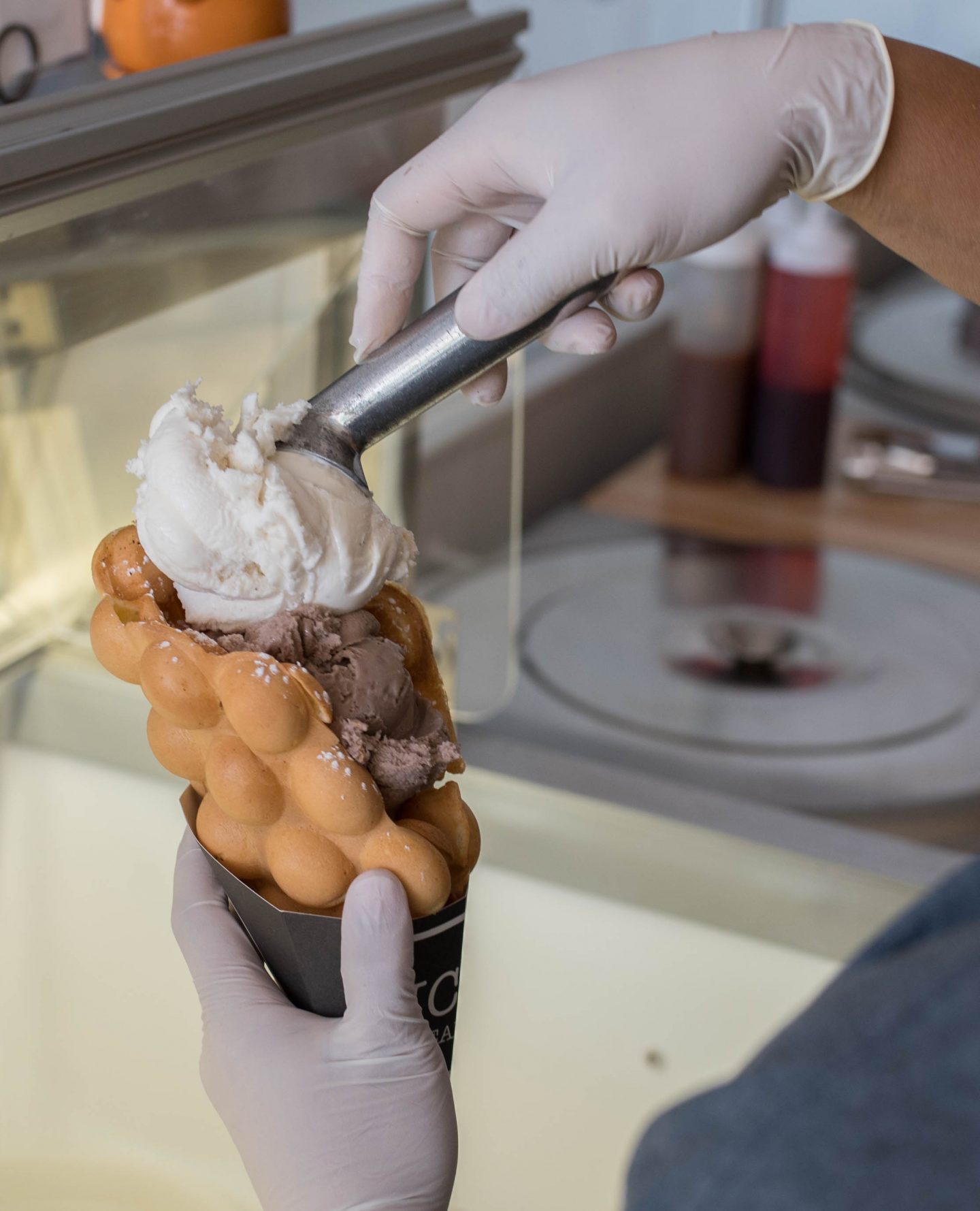 We also got two of their drinks to go because it was hot AF, and it was such a good call.  Their fruity drinks were super on point, and I can’t recommend them enough.  We tried their Watermelon Agua Fresca and their Blue Strawberry Lemonade, and both were exceptional. 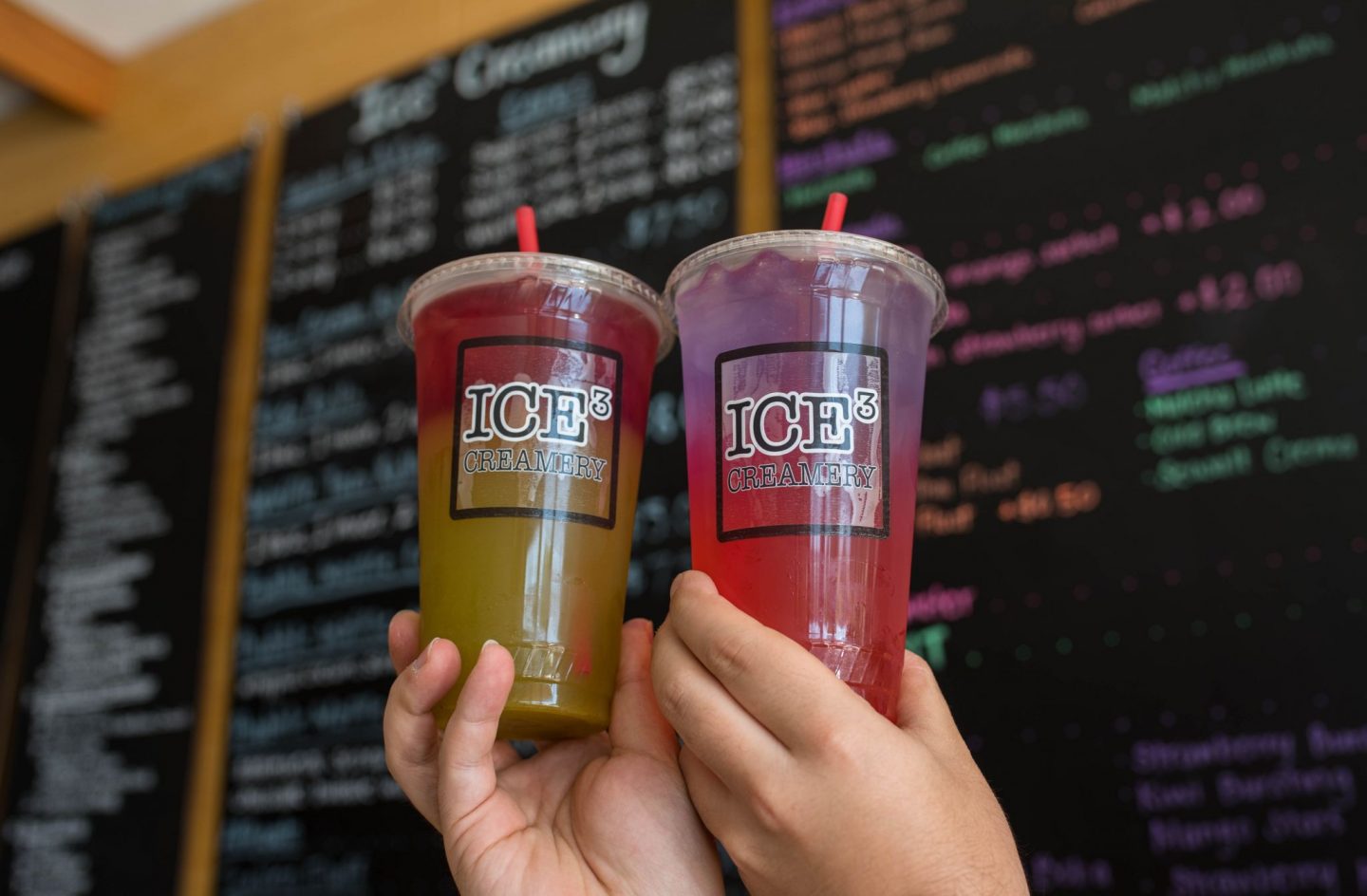 I liked the watermelon more because it was made with REAL juice, not syrup, but I’m not knocking their syrup, lol.  They made their lemonade with it, and it was bomb so whatever goes!  Both were priced at $3.50 a pop, and they were ginormous so we got serious bang for our buck.  So, do I recommend Ice3 Creamery?  Yes, yes and yes.  Go and get a bubble waffle with dulce de leche and make sure you get a drink to go!

Oh Funny Farm, I really liked your food, but the ambiance wasn’t my jam, at least not on that day.  It was a dive bar – which I’m totally cool with – but there were a bunch of super noisy and drunk dudes playing pool right next to me so that was eh.  I’d still recommend this place though…as long as you don’t have kids in your party, and you’re ok with a dark and potentially noisy setting.  Chef Ron and our waiter, Monica, were both wonderful.  They checked on us several times to make sure we were happy with our noms.  Funny Farm specializes in delish burgers, crazy burrito combos, gooey melts, and so much more. 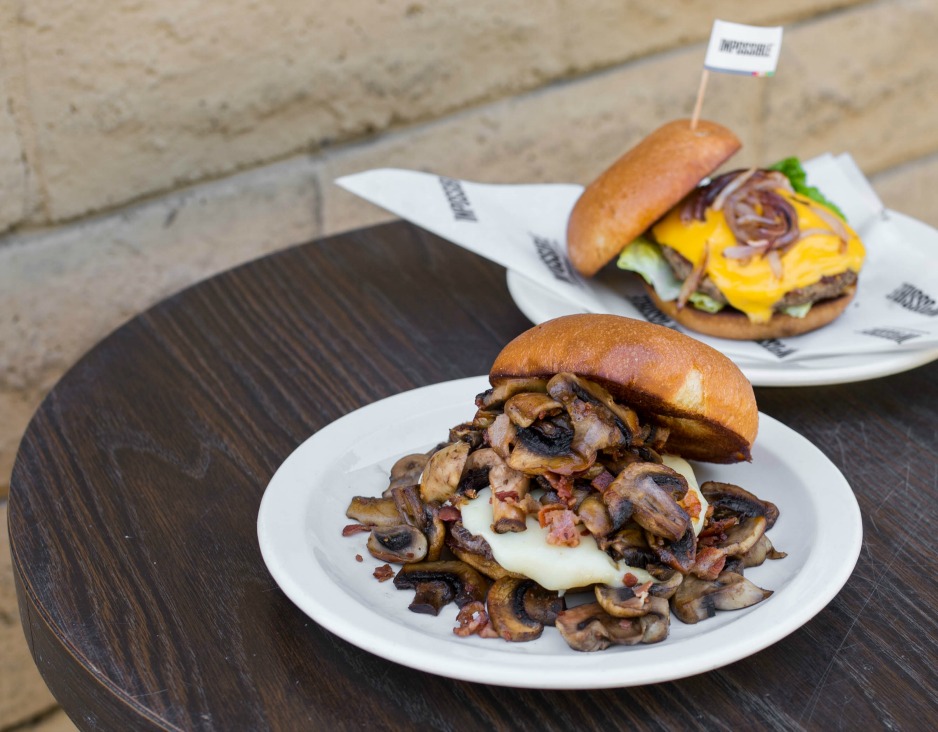 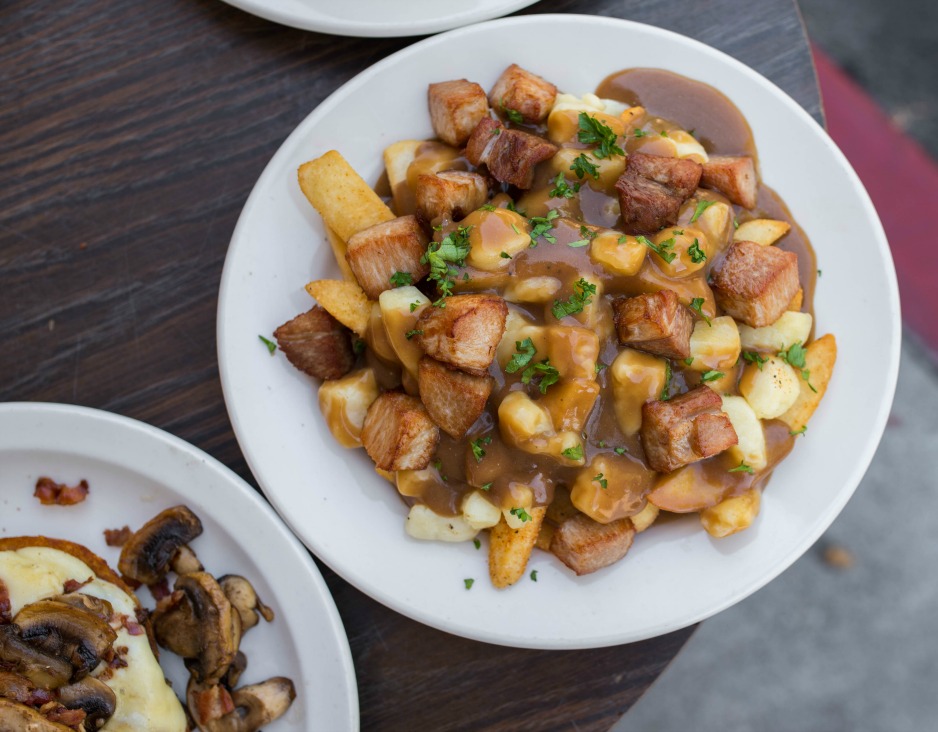 Robby and I got a bunch of different things to sample, and I’m really excited to tell you guys about our meal.  Here’s what we ordered:  an Impossible Burger ($15), steak cut fries ($5), poutine with pork belly (an experimental dish that’s currently not on the menu), a truffle mushroom burger ($16, was a special that day), and a strawberry cheesecake chimi-churro for dessert.  I know, we’re fatties but sorry not sorry.  I obviously didn’t get to try the pork belly poutine or the truffle mushroom burger, but everything I had was super tasty.

The steak cut fries came out piping hot and was sprinkled with Chef Ron’s special seasoning.  I don’t know WHAT he put in that seasoning, but all I know is that I want to buy bottles of it and put it on everything I eat, lol.  The Impossible Burger was actually really good.  I had low expectations walking in, but I’d totally get it again!  They say it’s the “best plant based burger patty” on the market, and I don’t disagree.  It didn’t taste like meat to me, but I still really enjoyed it, and I think it’s a great alternative to beef.  I really hope it’s available in the DMV as well!  Let me know if you guys see it somewhere so I can indulge. 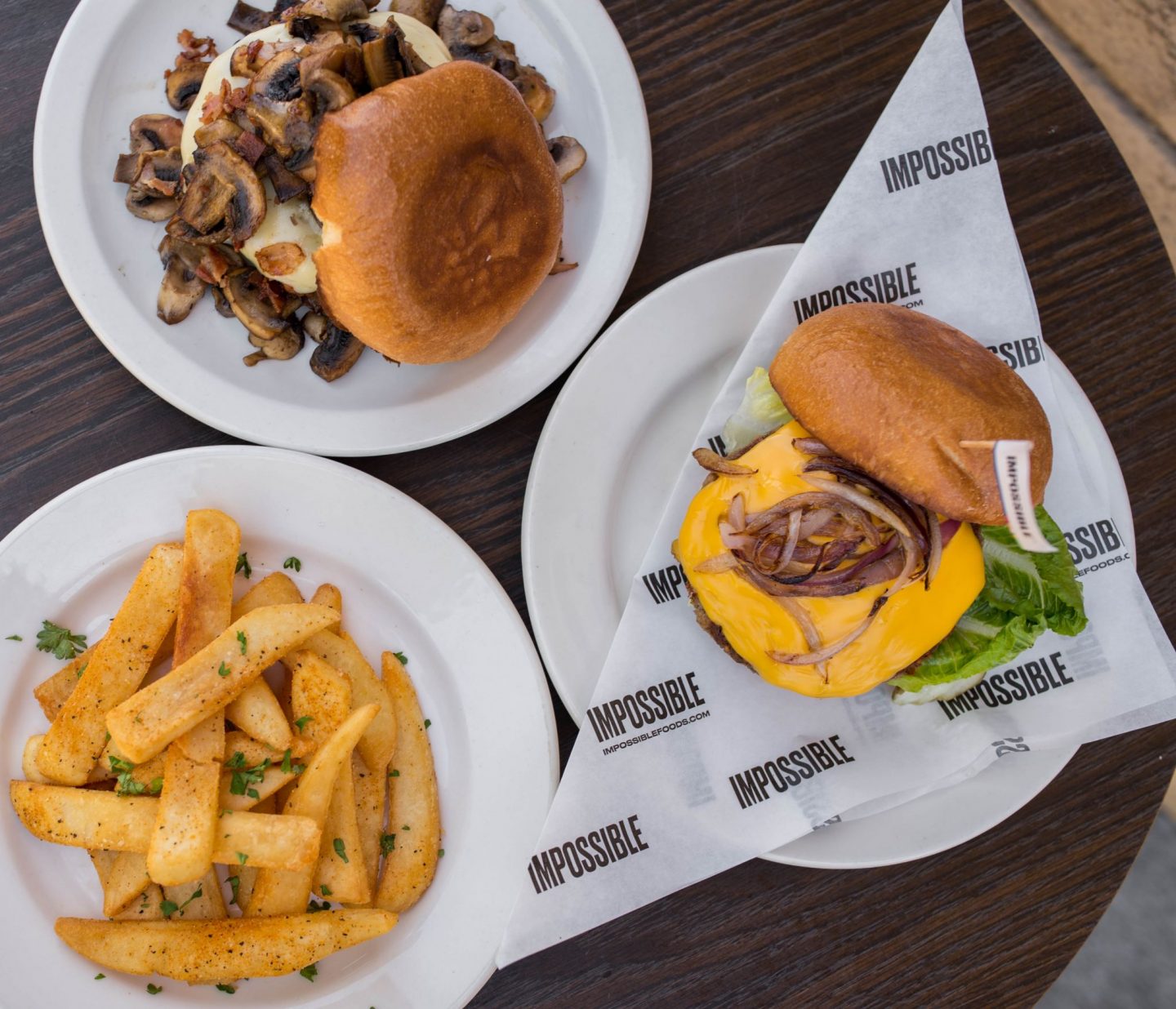 Andddd last but not least, the chimi-churro.  Ok, so let me explain this dessert to you guys.  It’s a twist on the chimichanga, and Chef Ron calls it a chimi-churro because the exterior tastes, well, like a churro.  He deep fries a strawberry cheesecake and then coats it with cinnamon sugar.  ‘Nuff said.  I mean, how could that NOT be good.  Each bite was magical, and I still dream about it from time to time.  If you’re in San Jose, definitely go and indulge in some serious foodporn. 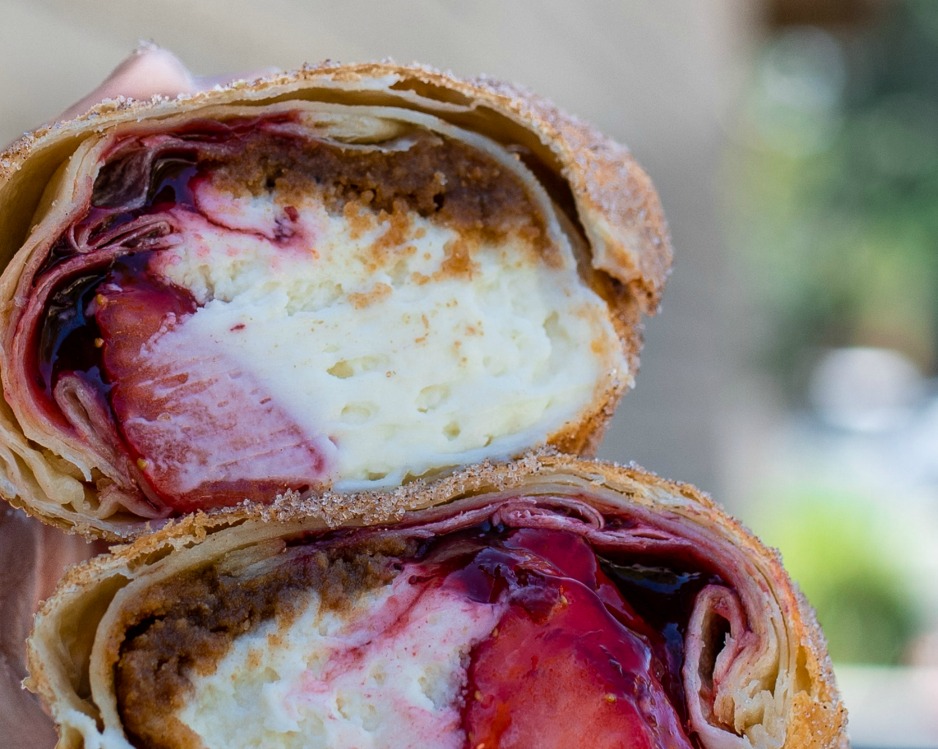 We were still stuffed from Funny Farm so we didn’t get food, but we each got a popsicle because I wanted to try Milk & Wood’s insta-worthy ice cream. Located in downtown San Jose, their stand’s right at the entrance of SoFa Market.  I really wanted to like this place, but I felt like it was kind of overrated?  Robby enjoyed his, but mine was way too sweet.  They did have cool flavors available though (think coconut, matcha kit kat, peach sorbet, and more)! 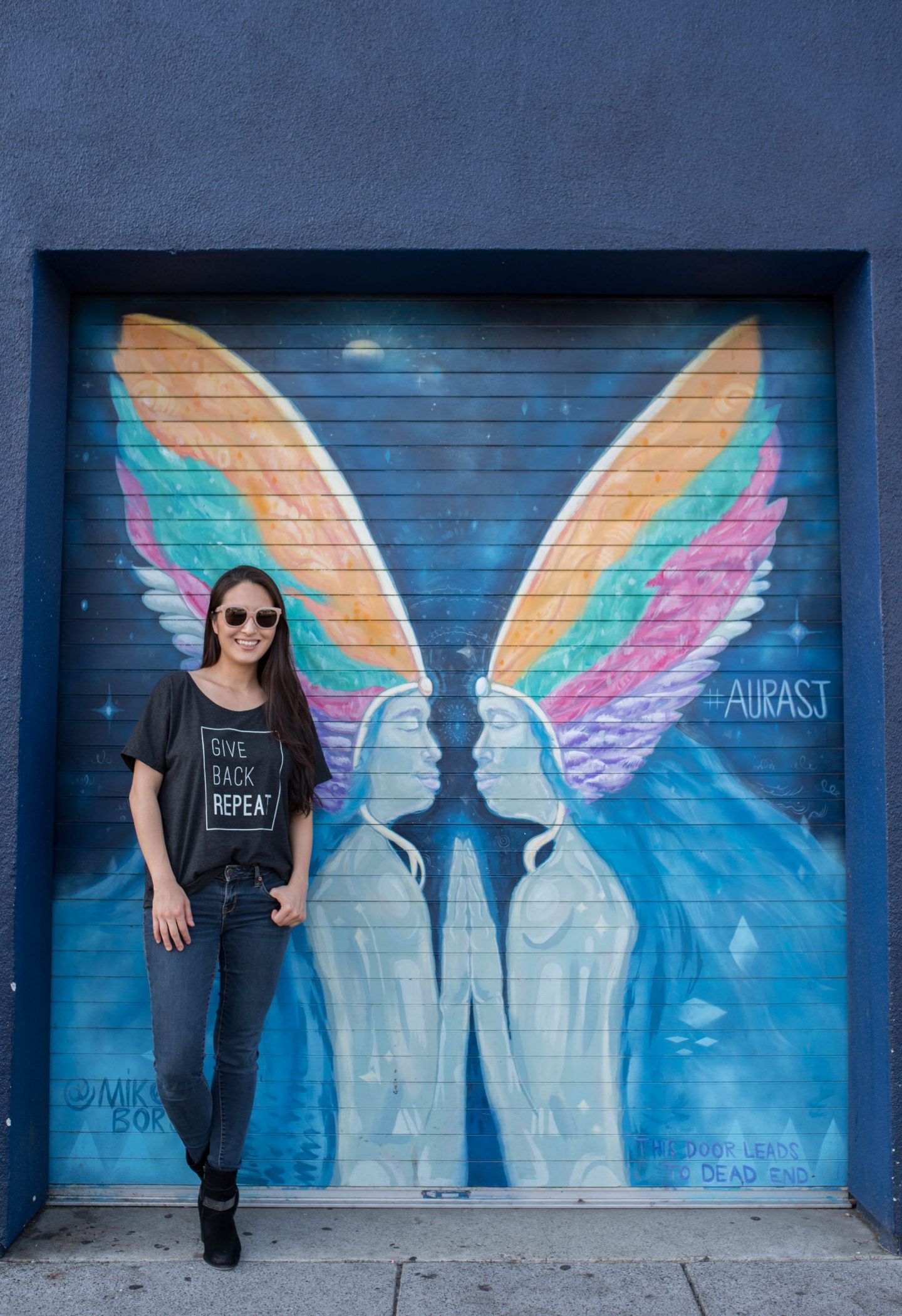 A kid’s size is $3.50 and a regular is $4, and the aforementioned price includes a Belgian chocolate drizzle + unlimited toppings.  An awesome deal, right?  I feel like that’s where they get you!  They have a ton of options, which is great, but overdoing it ruins it, like your popsicle will look pretty, but it’ll taste gross.  Now, I know that’s MY fault for going cray, but I was still disappointed. 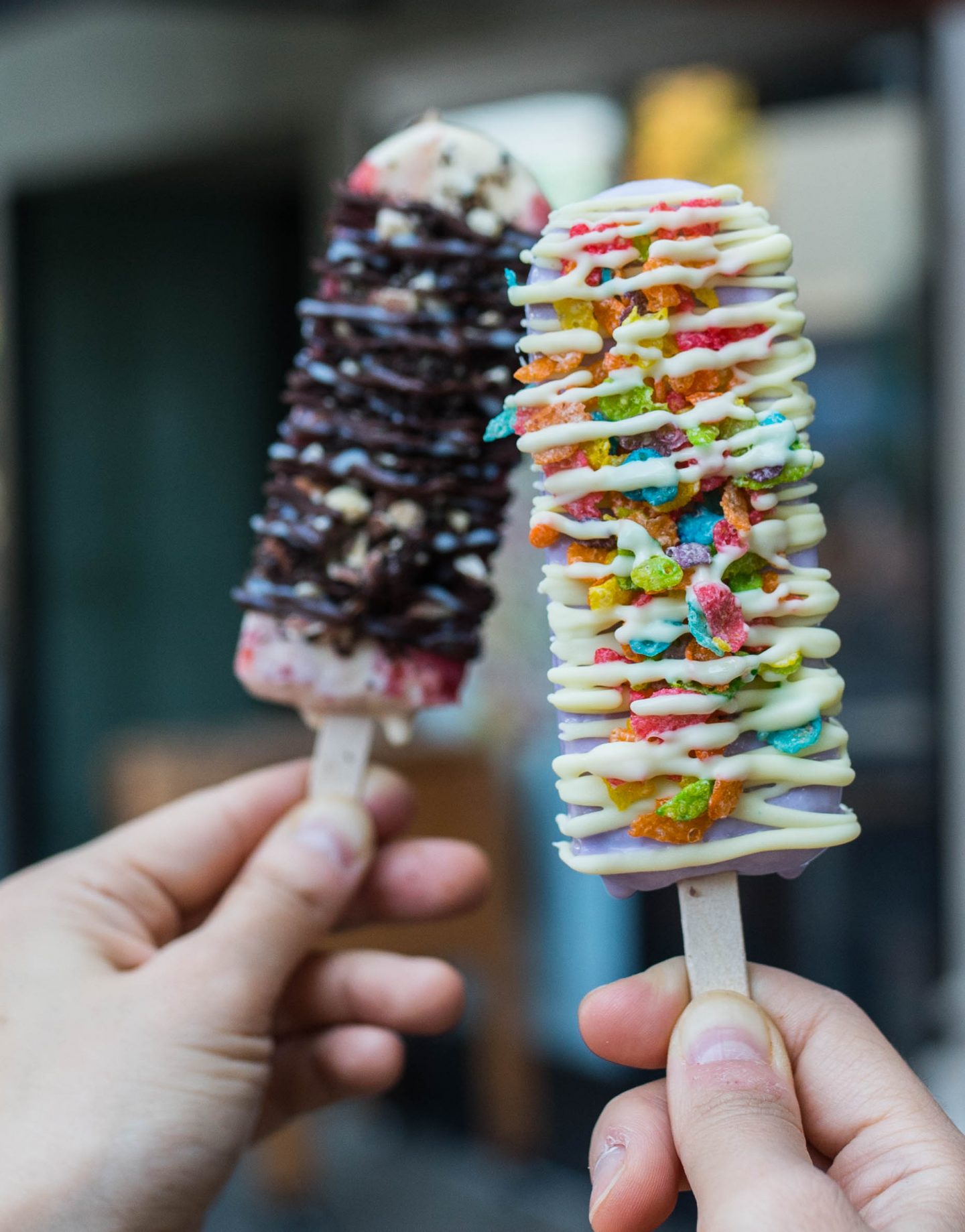 We got their mango strawberry and taro popsicles and loaded them up.  We got white chocolate + fruity pebbles on the taro and nuts, chocolate chips, dark chocolate, and condensed milk on the mango strawberry.  Honestly, if I went back, I’d just get a matcha kit kat popsicle with dark chocolate, and that’d be it.  If you go, don’t make the same mistake I did.  I know it may be tempting to get everything in sight, but keep things simple.  Your taste buds will thank you!

Oy vey.  Thaibodia was a fail on so many different levels!  Robby and I were planning on eating at Pizza Antico, but there was a line out the door, and I absolutely hate waiting so we just up and left.  It was a Wednesday night, but Santana Row was still insanely busy.  Apparently, SJ peeps like to turn up every night of the week, lol.  We didn’t know where to go so I yelped and discovered a new restaurant called Thaibodia.  I love Thai food, and I haven’t had it in ages so I thought it was a good call at the time.

READ  I Egg You: The Must Try Breakfast Place in DC

Nope.  The meal started off well, but we were annoyed by the end because the food was so underwhelming.  We got an app to share (their fresh rolls with tofu), and this was the highlight of the meal by far.  In fact, we were super impressed by it because everything was so fresh, and the accompanying peanut dipping sauce was really tasty.  We weren’t happy with the price though ($11.95), but to be fair, they gave us two humongous rolls.  I just wished they gave us more tofu!  Regardless, we were looking forward to entrees, but they were literally the most bland dishes ever.

Robby got Pad See Ew with pork ($13.95), and he said the meat was super rubbery.  I obviously didn’t try his dish, but I can only imagine how disappointing it was because my ginger tofu was so lame…and I had to pay for rice separately? WTH.  I’m sorry, but asian restaurants should NOT charge extra for rice.  It’s a serious pet peeve, and it genuinely blows my freaking mind when a place charges you for rice when you’re paying for an entree that’s not even a noodle dish.  Sigh.  My plate came out cold and had 7 small pieces of tofu and tons and tons of veggies aka mostly canned baby corn.  Suffice it to say, we won’t be going back [insert sad face]. 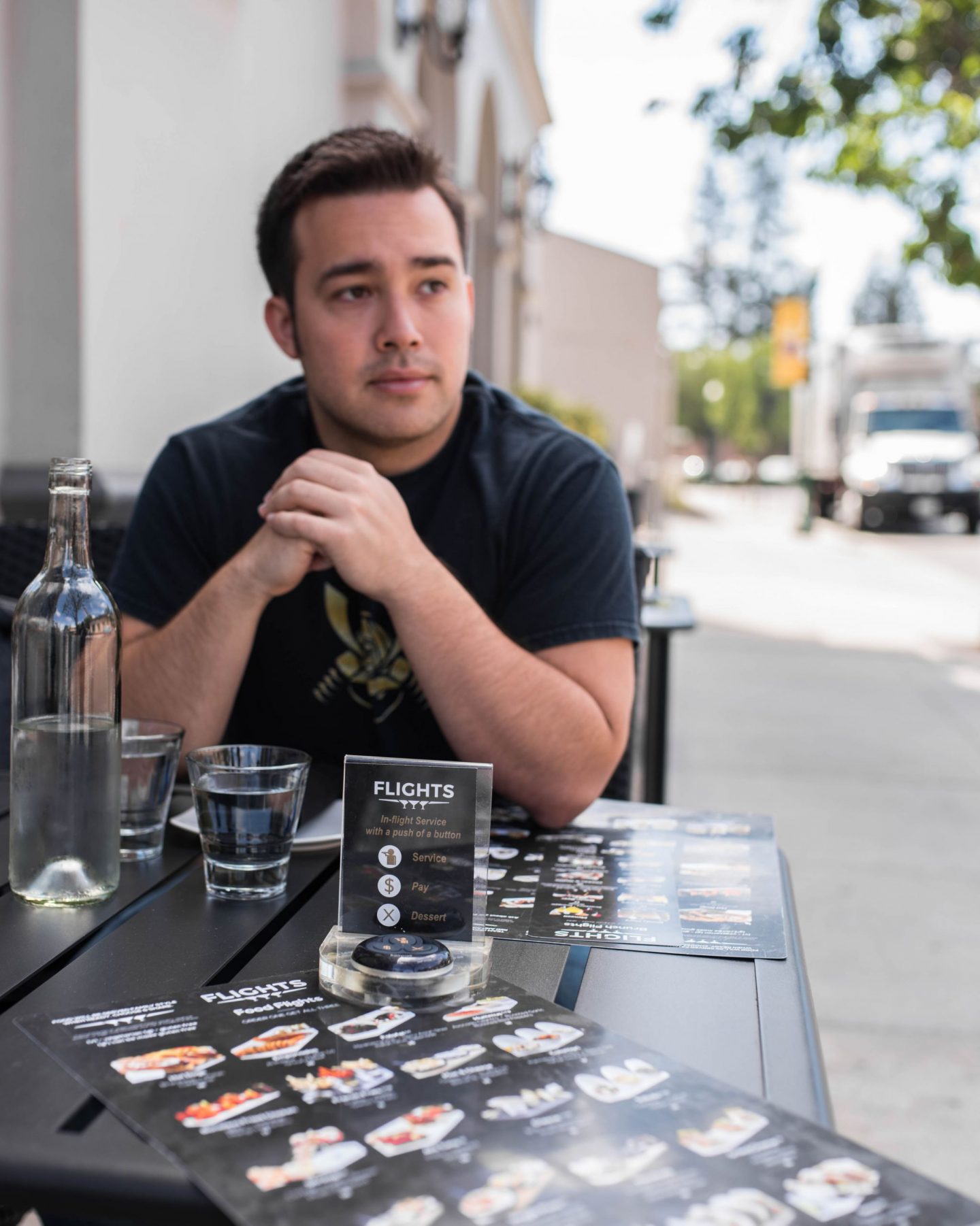 On a much more positive note, we hit up Flights for an early lunch the following day, and that was GREAT. I’d recommend this place to all my friends and family because it was such a fun concept. It’s a tapas style restaurant, and everything’s served as a trio of three including food, wine, beer and dessert.  They have a cute aviation theme going on, and I truly loved the food, atmosphere, and service.  They have three locations in NorCal, and I went to the one in Campbell. 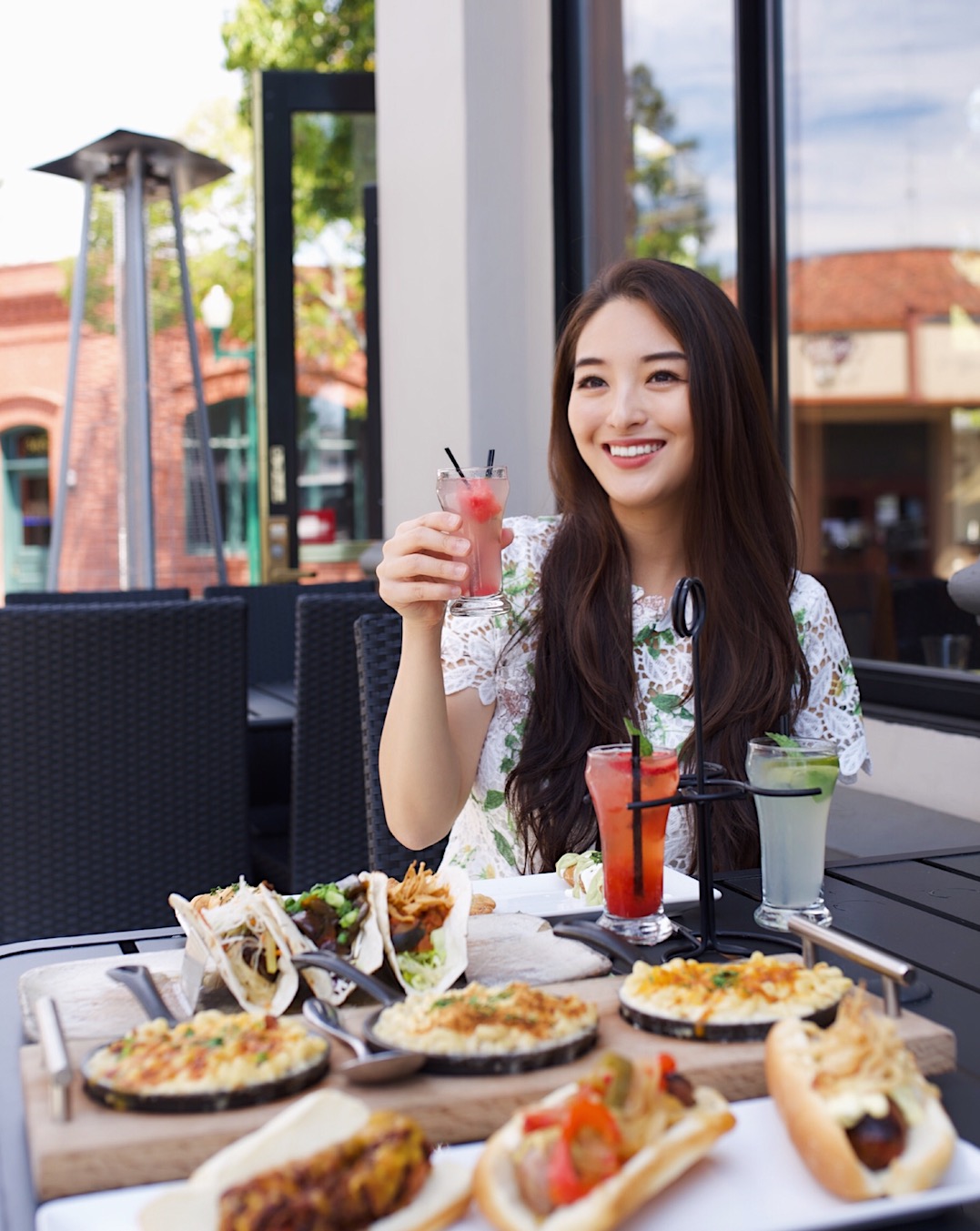 We ordered their mojitos (watermelon, strawberry, and classic for $19) to start while we browsed their menu!  Everything looked amazing, but we decided to get the following:  their hot dogs (bratwurst, polish, and calabrese for $16), their empanadas (al pastor, truffle, and ground beef for $15), their veggie tacos (thai tofu, veggie rancheros, and mushroom teriyaki for $13), and their mac & cheese (classic, truffle, and bacon & jalapeño for $16). 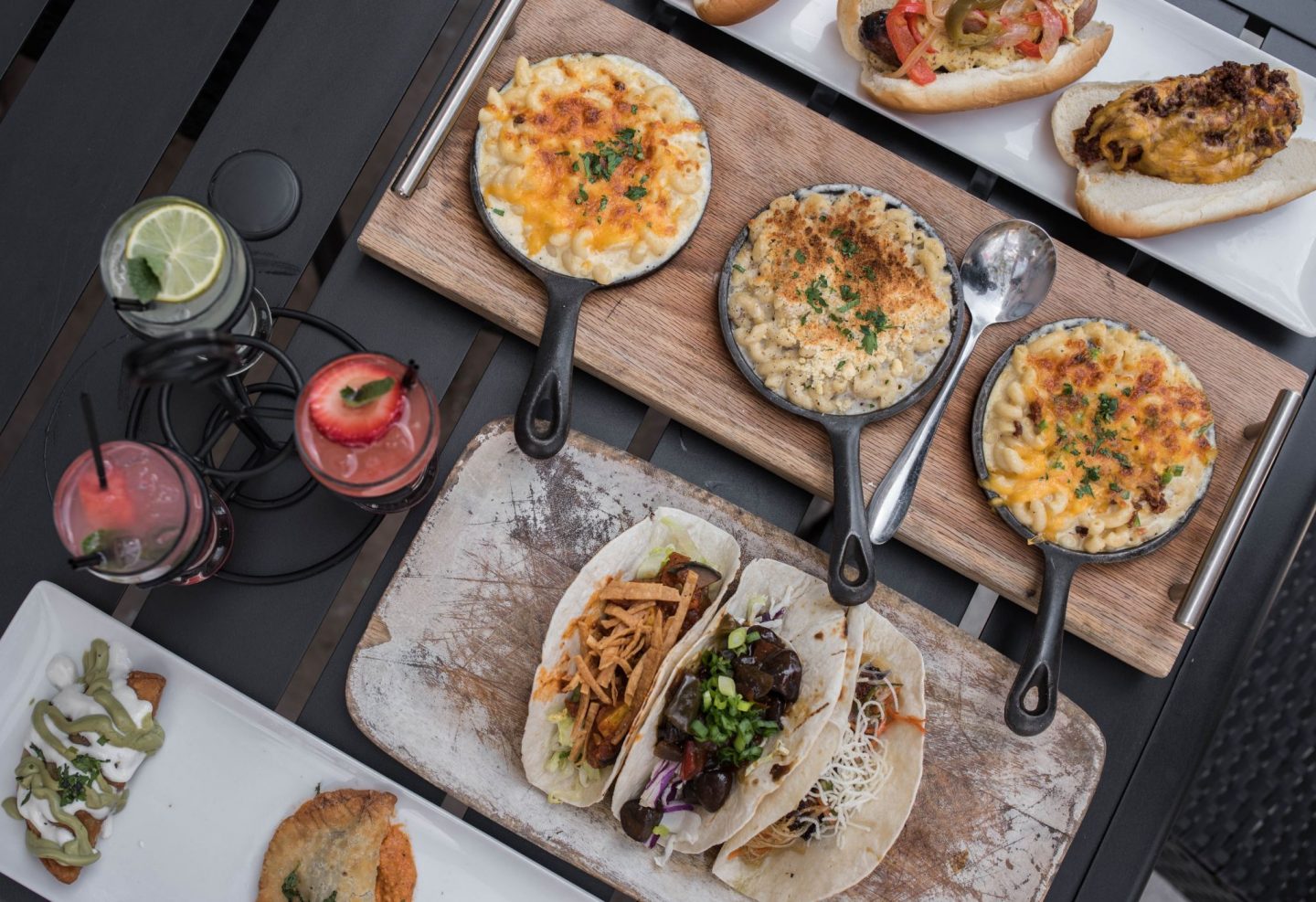 I loved that they had so many vegetarian options available.  I obviously couldn’t eat the hot dogs, but the truffle empanadas and their truffle mac n’ cheese were straight up obscene.  I’d honestly go back and just get an order of 3 truffle empanadas and mac n’ cheeses and call it a day.  Ha! I kid, I kid…yeah, I’m totally not kidding.  I do want to try their falafel, french fries, hummus, and grilled cheese the next time I go back though, and believe me, there will most definitely be a next time. 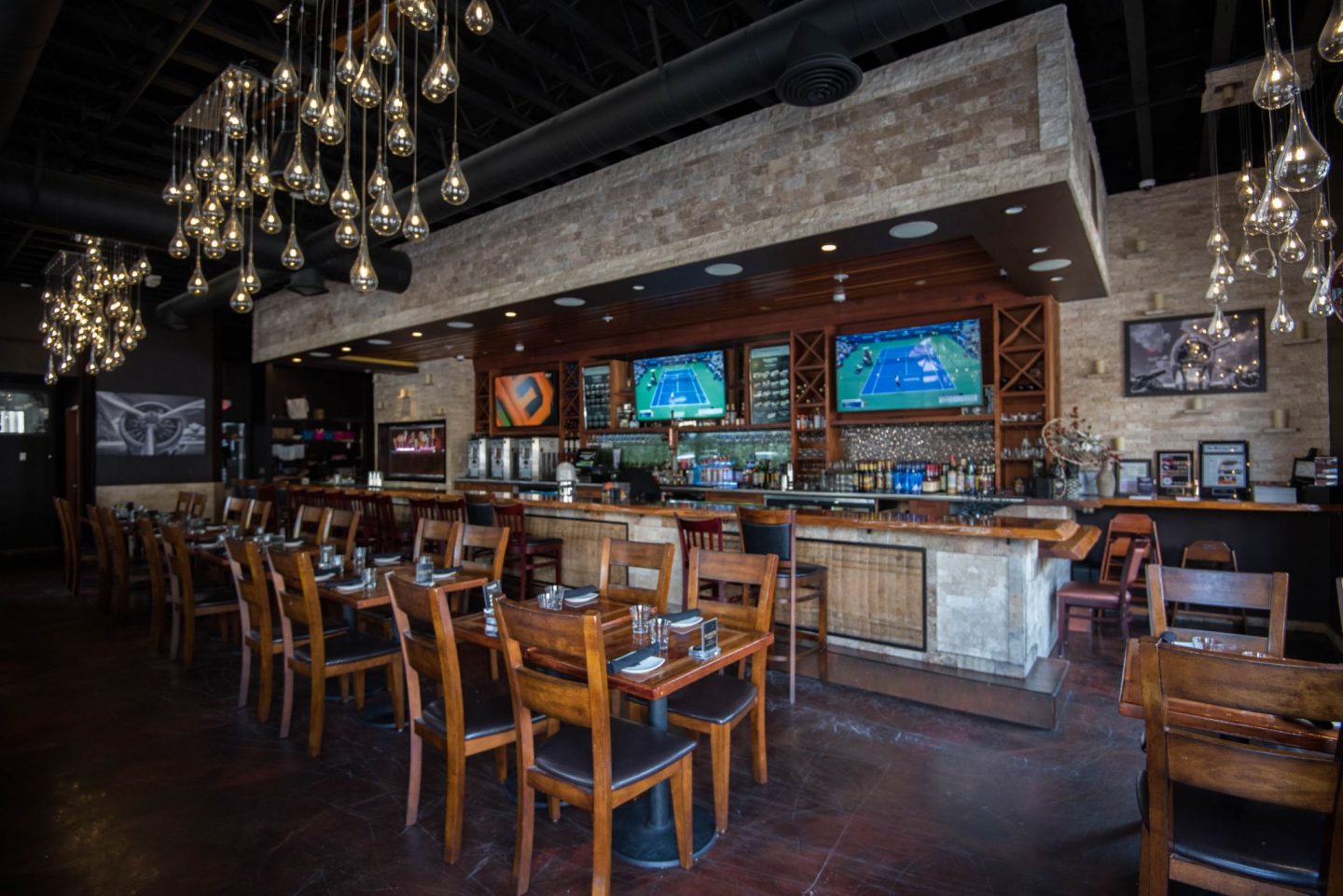 Anywho, that’s it for today! I know that was another super long food post, but I hope you enjoyed it regardless.  If you hit up any of these places, definitely let me know because  I’d love to hear your thoughts on my recommendations!  For more foodporn, make sure to check out this tab.  And stay tuned because I’m currently working on MORE nom content.  Until next time, friends.