Pumped to tell you guys all about my latest nom adventure with Justin Schuble aka DCFoodporn.  We went to Fig & Olive last week to get our grub on.  I had heard really good things about their prix fixe lunch menu so I was beyond excited to devour it all. 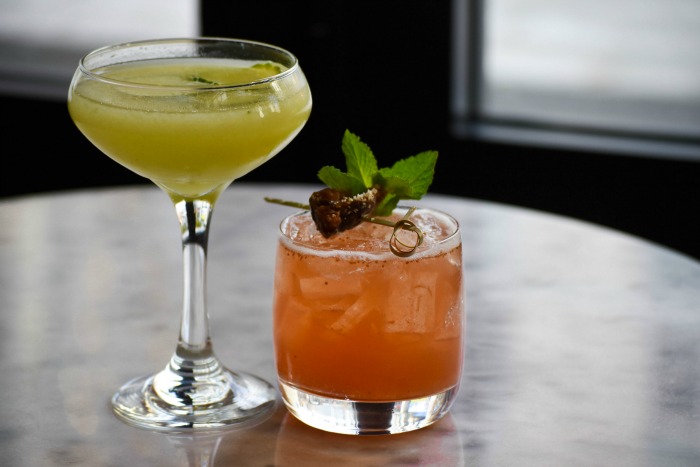 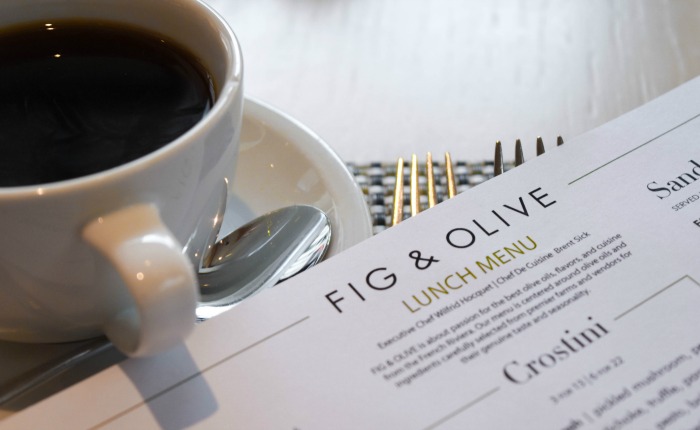 We were starving so we placed our order quickly.  Our waiter was super helpful and attentive!  Fig & Olive definitely gets a 10 for service, and as always, the ambiance was on point.  If you’re big on beautiful decor, you’ll absolutely love this restaurant.  Their interior is sublime!  I still can’t get over how gorgeous their bar is. 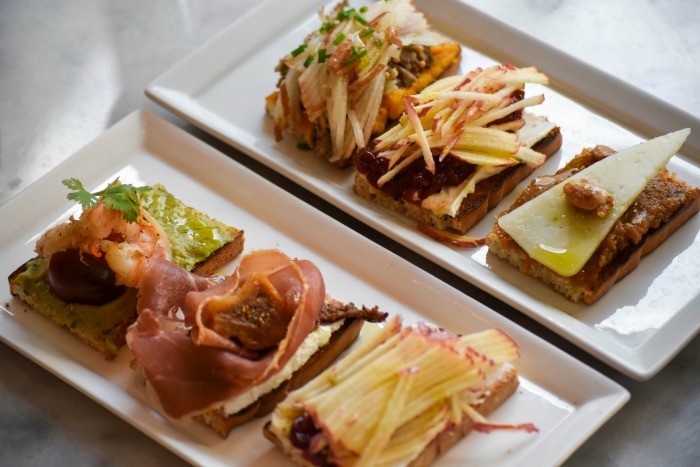 Now, back to food!  Their prix fixe lunch set costs $29 for three courses, but you can start with a crostini tasting for an extra $8. There are 9 different flavor combinations available, but I went with the Proscuitto, Shrimp, and Gorgonzola. 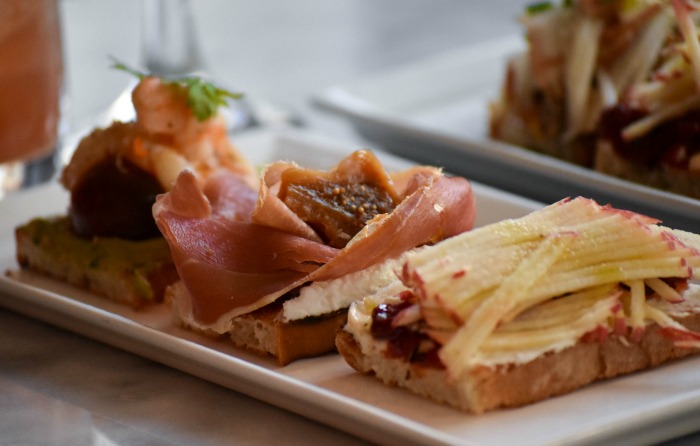 For starters, they offered four different appetizers as choices.  Justin went with the Salmon Crudo, and I ordered the Burrata & Heirloom Beet Salad.  The salmon was marinated in a pink peppercorn pomegranate dressing and was garnished with pomegranate and grapefruit segment. 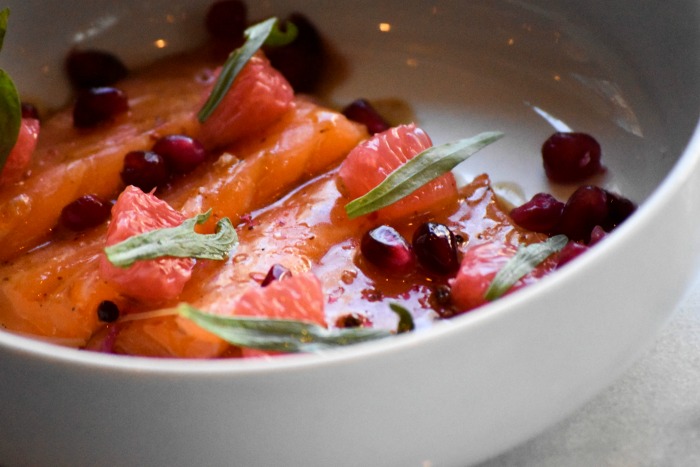 My dish had slivered red apple, radicchio di Treviso, and hazelnut and was topped with a dill apple cider dressing. I’m a sucker for cheese in general so this was pretty much a slam dunk in my book!  I haven’t had burrata in forever either so I was excited to indulge. Now, moving onto our main entrees.  Justin went with the Riviera Salmon, and I got the Walnut & Gorgonzola Linguine with shrimp.  I don’t eat fish so I didn’t have a chance to try his dish, but he told me it was tasty.  It was accompanied by braised endive, baby kale, cauliflower puree olive & piquillo condiment. 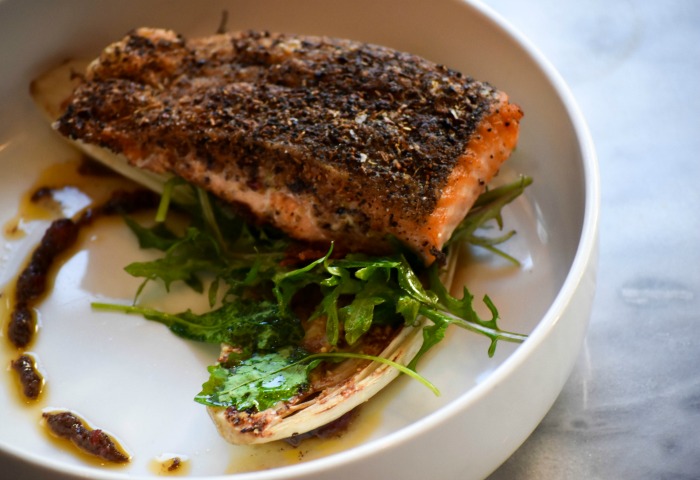 My noodles were tossed with white dried fig, shaved red pear, and scallion.  The sauce was very unique – I’ve never tasted anything quite like it before!  If you’re a fan of interesting pasta dishes, give this a go!  Note:  the shrimp (or protein of your choice) costs extra. 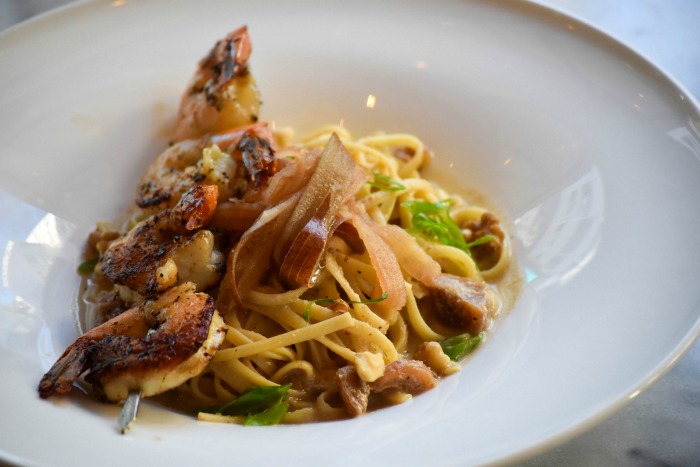 For dessert aka my favorite part of any meal, we got both offerings and shared.  The Chestnut Mousse & Amarena Cherry (pictured below) came with a walnut meringue and cherry sorbet.  The other dessert was called Chocolate Pot de Creme, and it came with a crunchy praline financiers + vanilla cream.  I definitely preferred the second, but that’s probably because I love chocolate everything so I may not be the most objective judge. 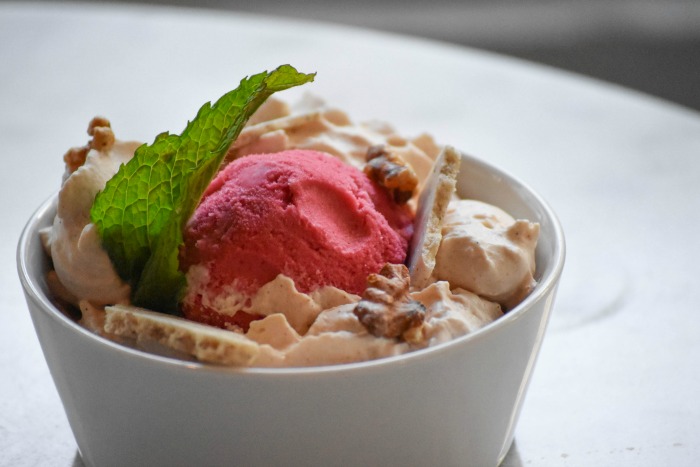 Have any of you guys tried their food yet? They have several locations throughout the US so head on over it you live close by. Also, who here’s a fan of prix fixe menus?  And before I leave you, a huge thanks to Fig & Olive for having us.  For more foodporn, click here!