Pumped to share my latest nom adventure with you guys!  I’ll be reviewing Fyve Restaurant’s lunch menu for y’all today on the blog. Now, before we get into it all, here’s an interesting tidbit:  the name of their restaurant was inspired by the Pentagon, which has five sides, five points, five floors above ground, five ring corridors per for, and a five-acre centre plaza.  And, like all Ritz establishments, the place oozed sophistication and class – I was beyond impressed with the decor, and the service was (unsurprisingly) impeccable. 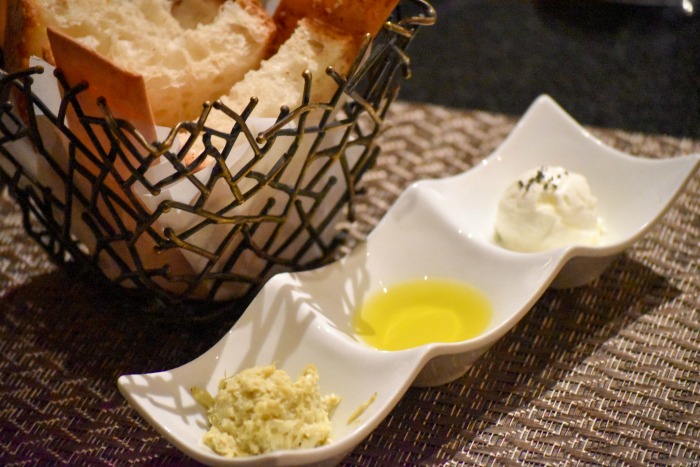 While we looked over the menu, the bf and I were served fresh bread with a trio of spreads:  whipped butter, olive oil, and an artichoke dip that was ridiculously yum.  We started our meal with two delicious cocktails.  Both of them were on point, but I enjoyed the Puzzle Palace (the one with the flower petals) more.  Made with Bowman Brothers Bourbon, St. Germain and orange + walnut bitters, it was expertly mixed.  I definitely want to go back and sample their other drinks! 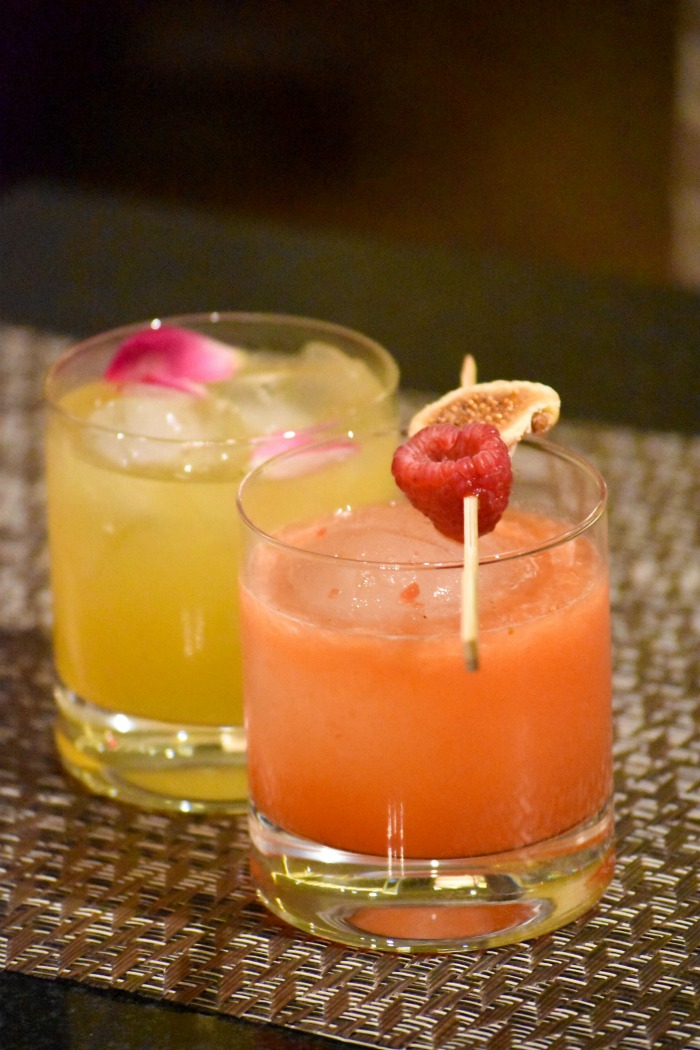 Our starters came out shortly after – we decided to share the onion soup ($11) and beet carpaccio ($13), and both dishes were perfection!  The soup came out piping hot (as expected) and was a bowl of cheesy magic.  The beet carpaccio was almost too pretty to eat.  The chef used red, gold, and candy beets for the app and garnished it with mizuna.  To enhance its flavor profile, he sprinkled pine nuts and goat cheese on top. 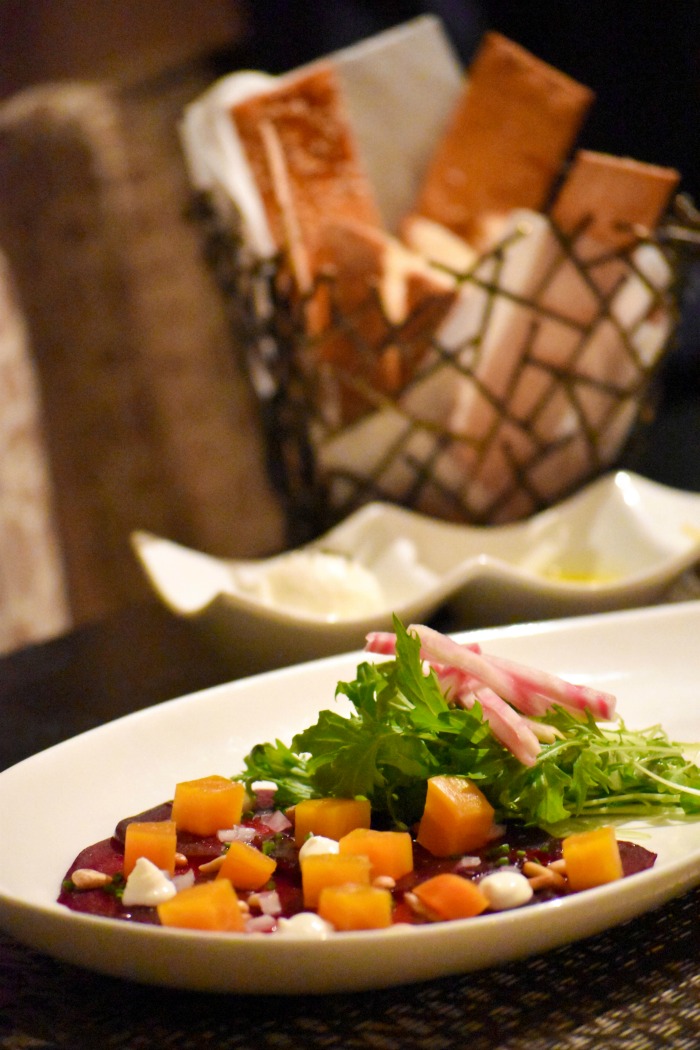 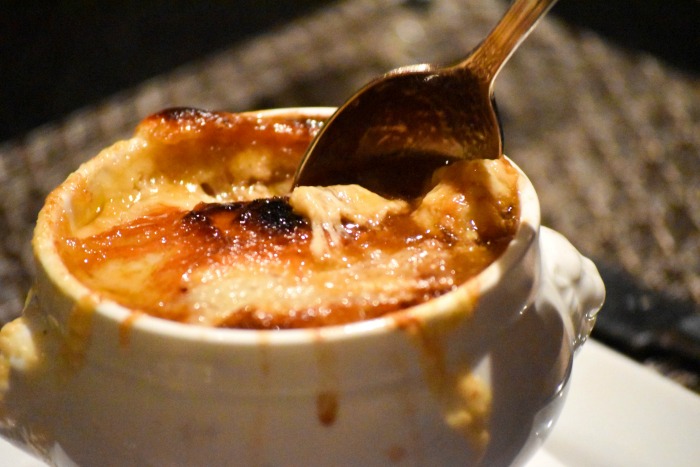 For entrees, we went with Ahi Tuna Sliders, Atlantic Salmon, and Shrimp & Grits.  The sliders came with wasabi mayo and pickled ginger and were accompanied by fried onion rings.  The salmon was priced at $25 and came with a yukon potato puree, yellow & green patty pan squash, sea beans, and red pepper coulis. I don’t eat fish so I didn’t get to sample either of these, but my bf said they were both phenomenal.  In fact, he took his leftovers home and ate everything for dinner so I’m assuming it was all delish!

Now, while my bf enjoyed his food, I destroyed my Shrimp & Grits.  I mean, just look at that plate! The photo doesn’t do it justice.  They don’t mess around here!  They give you five ginormous pieces that are cooked and seasoned to perfection, and the stone ground grits are to die for.  It also comes with artisan chorizo, which is a do on so many levels.  Hands down, the best shrimp & grits I’ve ever tasted. 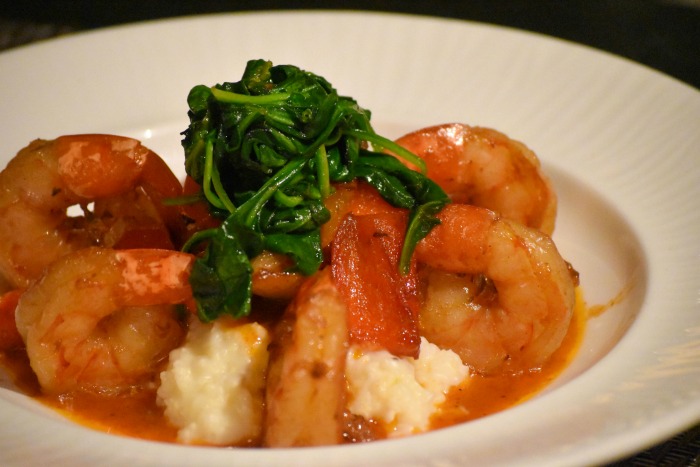 At this point, I was pretty much stuffed, but I couldn’t resist trying their desserts because I’d heard so many incredible things about their pastry chef.  Everything sounded hella good, but Robby and I ended up getting the Mocha Latte Creme Brûlée and Chocolate Caramel Peanut Crunch. 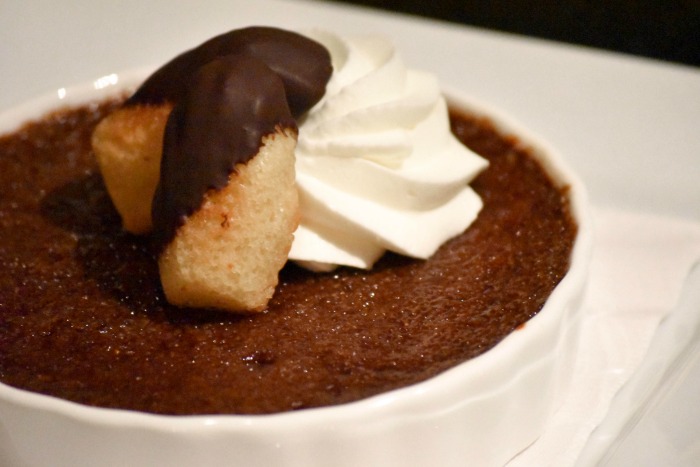 The creme brûlée was topped with whipped cream and came with mini-vanilla chocolate madelines. The presentation was on point, but it tasted even better than it looked.  Like, I finished the entire dessert…by myself, ha.  Luckily, Robby preferred the cake. If you’re a fan of peanut butter, you need to indulge in this goodness STAT. The layers are as follow: Valhrona Milk & Dark Chocolate Mousses, Salted Caramel, and Peanut Feuillittine.  Then all that yum is topped with caramel sauce, VA peanut brittle and served with vanilla ice cream. 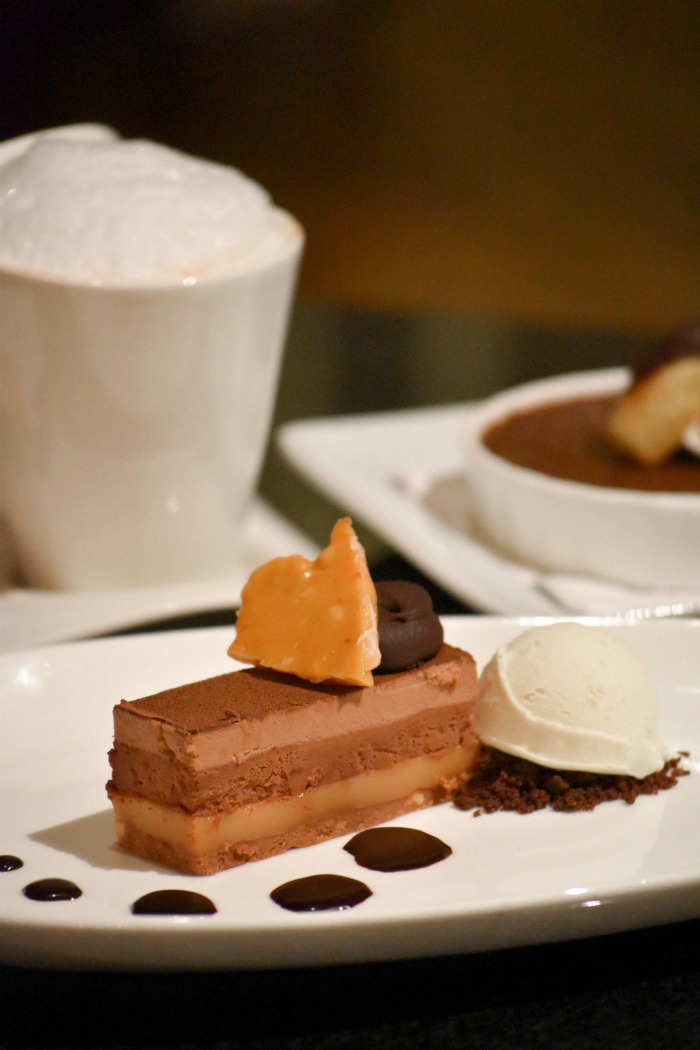 If you’re looking for a fab place to dine in DC, hit up Fyve Restaurant for an incredible meal.  A huge thanks to the Ritz Pentagon City for having us.  Andddd to browse more foodporn, click here!