Alright guys, it’s time for part 2 of my Phoenix travel recap – if you missed segment one and want to catch up, click here.  Now, it’s been a while, but if I remember correctly the aforementioned post ended with me, Mel and Diana passing out at Hotel Valley Ho after a long but very fun day.  We were all exhausted, but we woke up hella early anyways because we wanted to take photos around our suite and eat breakfast before hitting up Usery Mountain Regional Park.

We ordered a TON of room service and shot a kickass flat lay in bed!  In case you’re wondering, we got a fruit smoothie, a yogurt parfait, a vat of coffee, Belgian waffles, red velvet waffles, and a mushroom omelette with toast and taters.  I’m not gonna lie, by the time we shot everything the noms were straight up cold…but luckily still delicious.  We were laughing our asses off while styling this shot (see it on insta here) because we tied Diana’s camera to the chandelier to get the best angle possible.  Hashtag creative blogger solutions.

After scarfing down brekkie, we changed quickly and checked out.  Tai from Boss Transportation was waiting for us out front to take us to Usery.  Anddddd let’s just take a time out to talk about Tai for a quick sec.  If you’re in AZ and need a ride, hit him up STAT.  He epitomizes professionalism and is cool as hell – he’ll get you wherever you need to go on time all day, every day with max comfort. You’ll seriously feel like an a-lister riding in the back of his whip.

Anywho, it took us about 20-30 minutes to get to Usery, and I was amped during the entire drive.  I’m a huge fan of hiking, and I had no doubt the views would be ridiculously amazing so I was pumped. Usery Park’s located on the valley’s east side and takes in 3,648 acres set at the western end of the Goldfield Mountains.  We hiked Wind Cave trail and ended up 2,840 feet off the ground (!!!) It took us a bit longer than expected and we ended up being hella late, but it was worth every minute because the view was spectacular up top!

Here’s a shot of us resting in the wind “cave” – I say “cave” because it’s more of a scar-like depression in the rock.  Definitely worth checking out regardless!  Pro tip aka common sense tip: don’t go around flipping random rocks and stay on the main trail. This is the desert after all, and you don’t want to piss off the critters (rattlesnakes, tarantulas, scorpions, etc.) that live there.  It’s honestly fine, and I don’t want to scare anyone, but it’s better to be safe than sorry, right? I didn’t see anything other than a cute chipmunk and hummingbird, but one of the guides told us she saw a snake on the main path a while back so just be attentive…and smart. 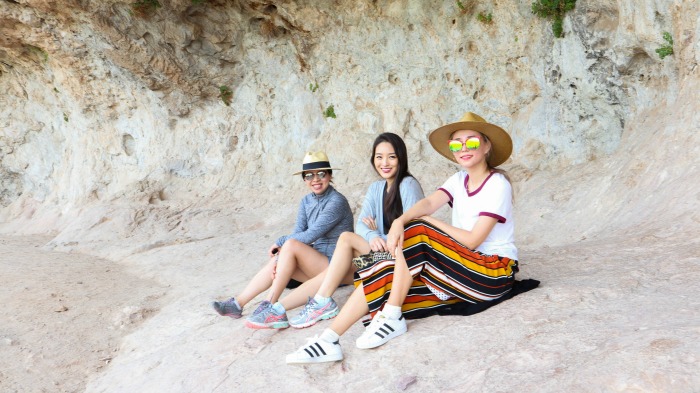 After our hike, Tai drove us to Queen Creek Olive Mill for a tour + tasting.  We got there and were greeted by the most beautiful spread of tapenades, sandwiches, charcuterie, and sweets.  I wasn’t super hungry (shocking I know) so I decided to just chill and munch on a cupcake while chatting with my new blogger friends.  They were raving about the food so I’m assuming it was delish – I’m actually kind of bummed that I passed on noms now, but I guess that just means I’ll have to go back.

Diana and I finished quickly so we decided to explore.  We walked inside and sampled rows of olive oil and balsamic vinegar.  I can’t even begin to tell you guys how good everything tasted.  I would’ve TOTALLY purchased several bottles to go, but I didn’t have space inside my suitcase so I had to pass – such a bummer. Their cheese stuffed olives and gelato though? So much yasssss. 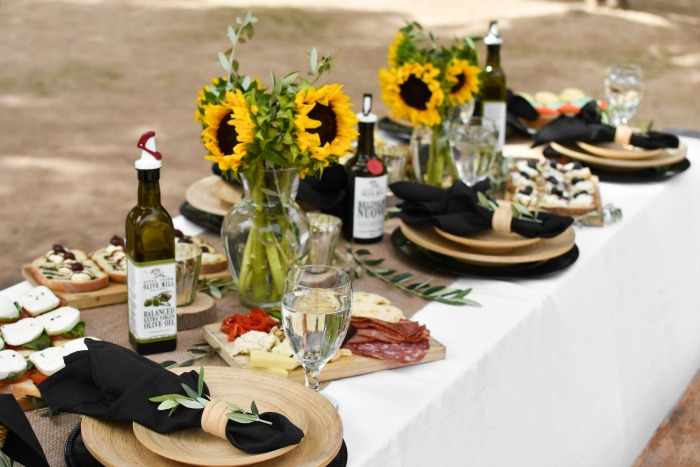 The different bruschettas that were waiting for us: Caprese with roasted garlic olive oil, fresh mozzarella, sliced tomatoes, basil, and robus EVOO.  Honey mascarphone, grapes, fig balsamic reduction, and balanced EVOO.  Then a pear one that I can’t remember? I think it was seasonal! 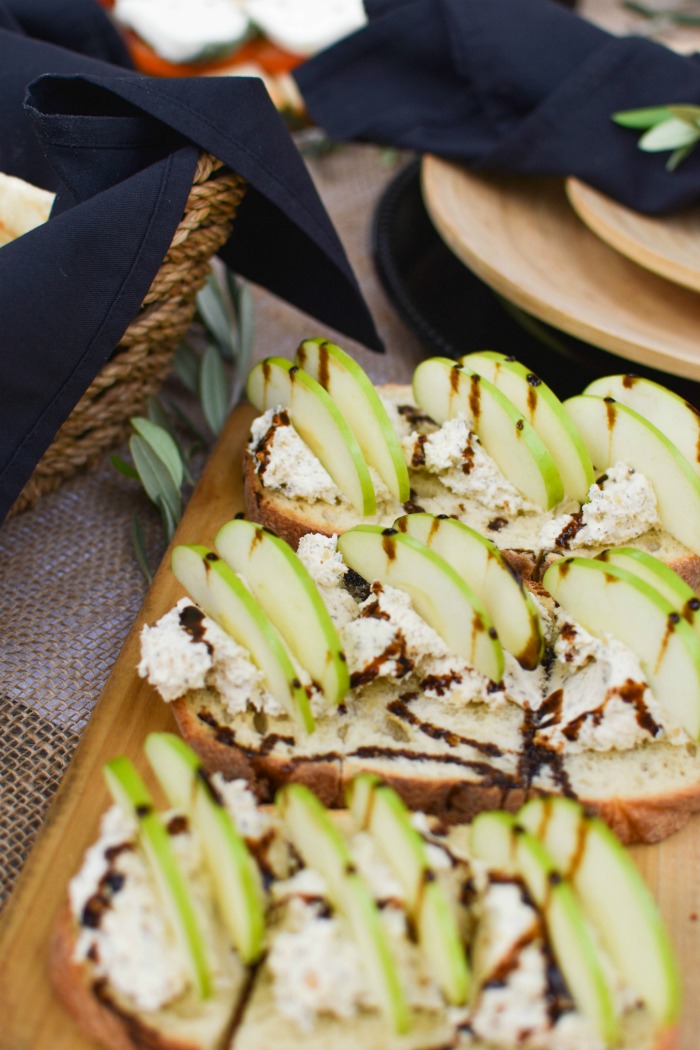 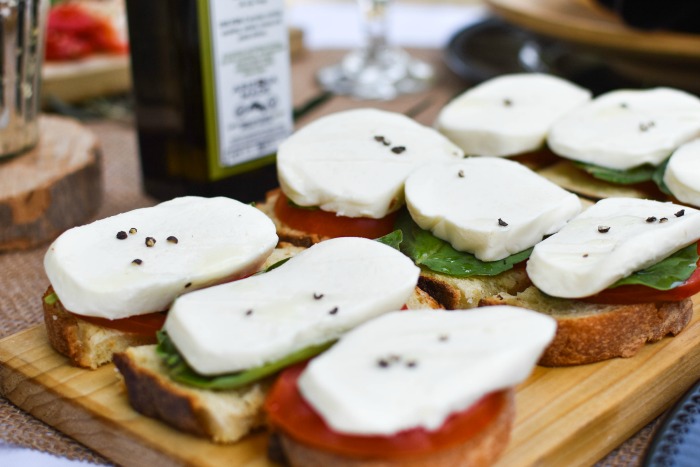 Delish cupcakes that were to die for good. 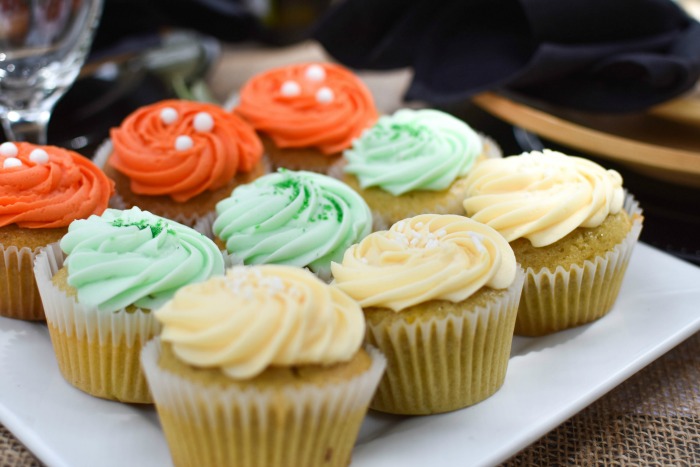 Then we went off to our second lunch, ha.  I was SUPER excited to go to Agritopia because I saw that we were eating at Joe’s Farm Grill – it was featured on Guy Fieri’s show, “Diners, Drive-ins, and Dives.”  After studying the menu for a solid 15 minutes, I decided to get two dishes that were featured on the show:  the Fontina Burger (made with roasted red pepper, grilled mushrooms, field greens, farm-made pecan pesto, and imported fontina cheese) and Onion Rings (hand-breaded in rosemary-dill panko).

I enjoyed the burger’s flavor profile, but for me, the star of the show was def. the onion rings.  They were crispy morsels of perfection, and I just couldn’t get enough.  Oh, and did I mention that Agritopia sells same-day harvested produce at The Farm Stand (in their community) in addition to providing fresh ingredients for the diner?  Oh hell yes. 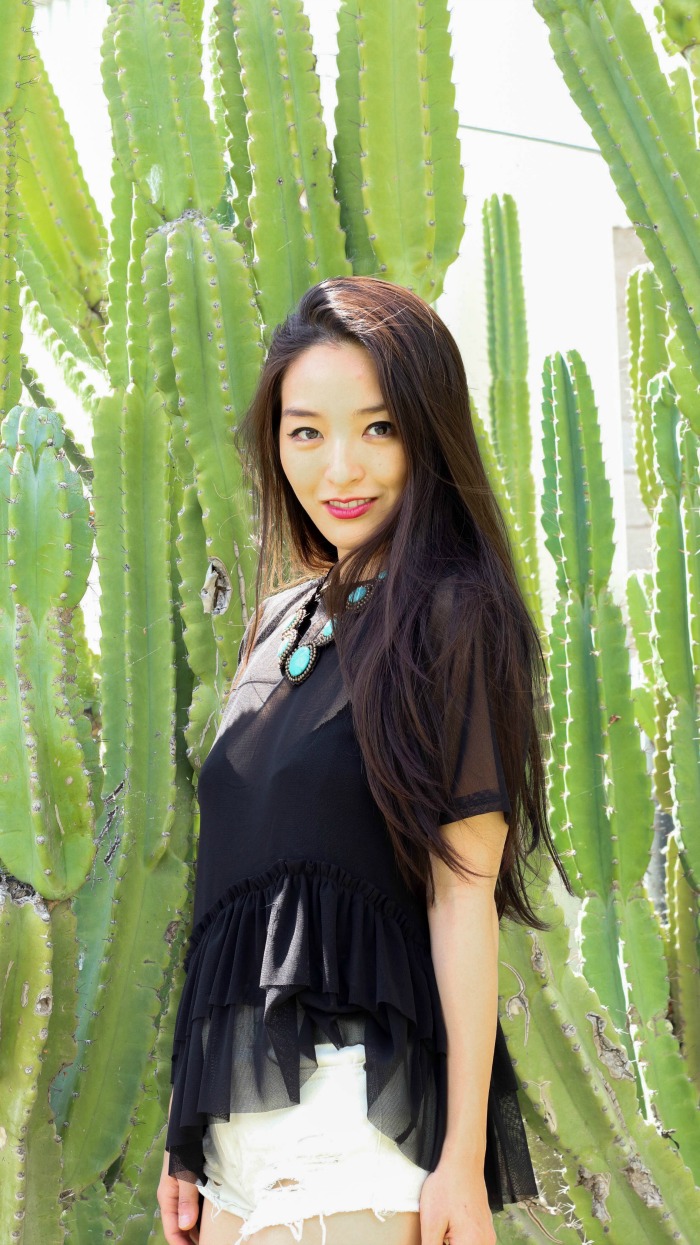 My noms – my presh noms. 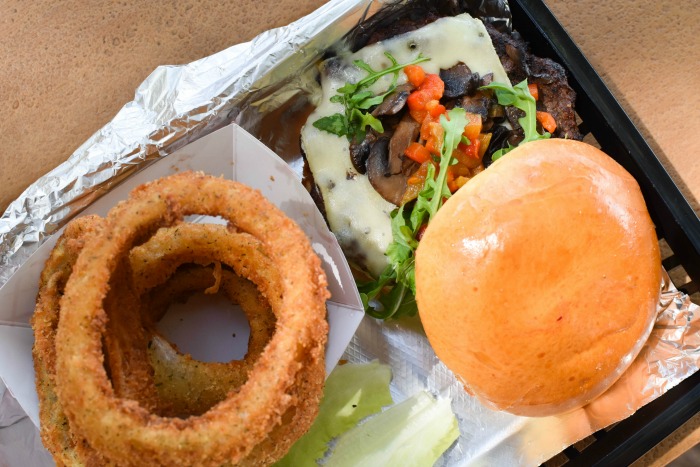 After eating aka experiencing mad food coma, Tai escorted us to The Scott Resort where we checked in. Once again, we were blown away by the facilities, and they made us feel super welcome with cute gift bags!  Mel and I had spa treatments scheduled at 3:30 so we unpacked quickly and power-walked to Jurlique.  She chose to get a resurfacing enzyme facial, while I got a Vichy Nirvana massage (as did Diana).

This may have quite possibly been one of the best experiences I’ve ever had, like, in my life. My therapist gave me a medium pressure full body massage while immersing my bod under their vichy shower, and I seriously felt like I was melting…and I mean that in the best way possible.  I came out totally relaxed, but wished it was 90 minutes long instead of 60, ha.  I’d honestly go back to Phoenix just to get pampered at Jurlique again. 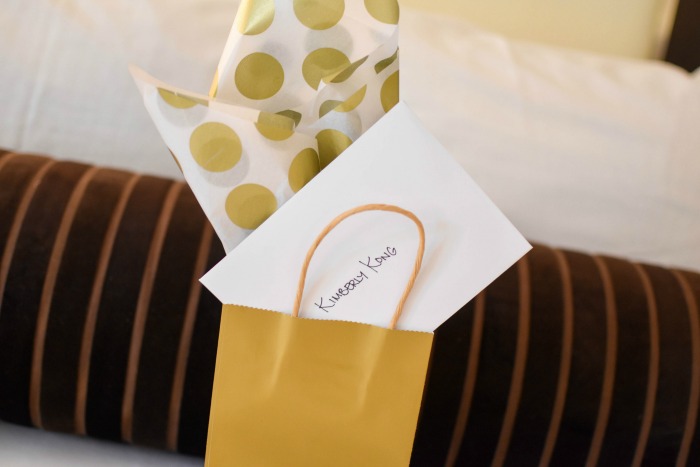 Post-spa chilling in my Amiclubwear shoot! 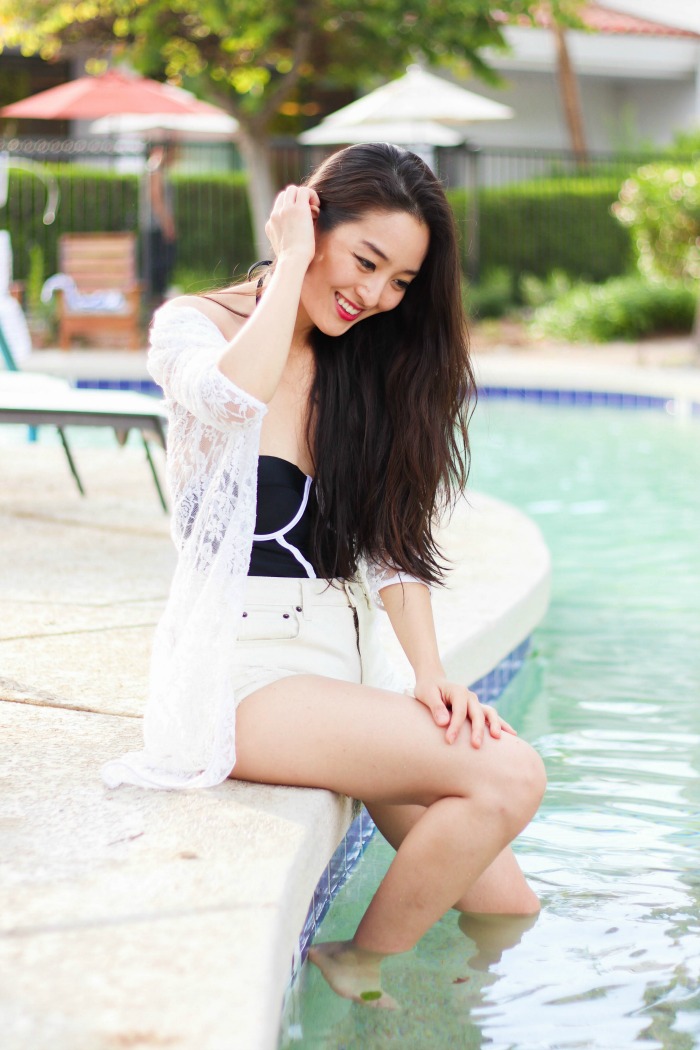 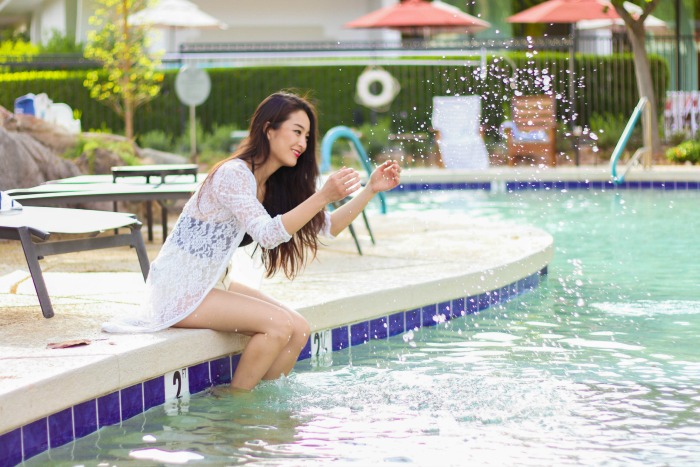 A huge thanks to Brooklyn Hat Company & Lipton PR for sending me this adorable hat!  I wore it EVERY day in AZ because I thought it was the cutest. I still can’t get over how adorbs the design is – it has little pom poms (!!!!) See a shot of it here on my instagram. 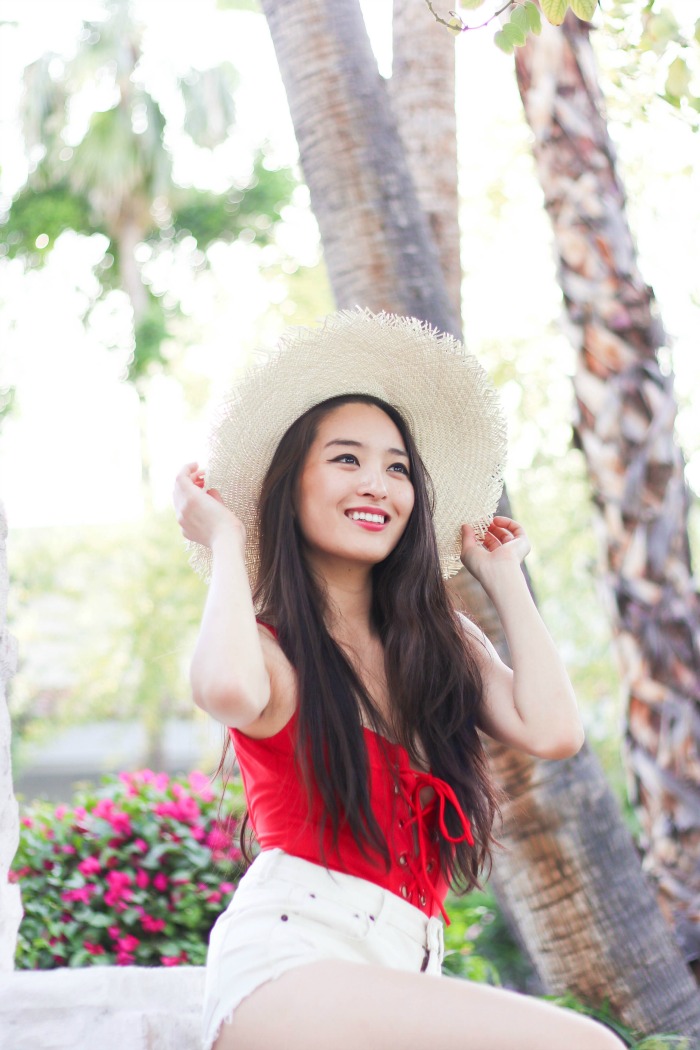 Anywho, after chillaxing and shooting pics, we rushed back to our room to get ready for happy hour + a fab culinary reception hosted by The Scott’s culinary team.  They hired a new chef recently so they were super excited for us to taste their food – they’re apparently revamping the menu and also renovating the resort throughout 2017.  After tasting their noms, I’m kind of sad I didn’t get to try their actual dinner menu.  The food and cocktails were so on point!  The girls and I totally “mmmmm-ed” out loud as we sampled everything.  After chatting with the manager for a bit, we ubered to SumoMaya for dinner…

…and died from multiple foodgasms.  Who knew Phoenix was foodie heaven? I’ve seriously had some of the most amazing food I’ve ever had in my LIFE in AZ.  SumoMaya’s a Mexican/Asian fusion restaurant featuring delish tapas that’ll leave you ridiculously satisfied.  We got two different kinds of sangria (rose + red) to start and browsed the menu leisurely before deciding on the following: Spinach + Bacon Salad, the Lobster Mango Roll, Rainbow Ceviche, Rock Shrimp Tempura, Korean Beef Tacos, Pescado Dorado Tacos, Seared Scallops, and Mexican Street Corn.

The grub was out of this world. If heaven was a food, it’d probably taste like SumoMaya.  As many of you know, I don’t eat fish so I skipped the Ceviche and Fish tacos, but everything else was game.  The spinach + bacon salad came with baby spinach, warm bacon, togarashi, walnuts, raisins, asian pear, and pickled egg topped with a champagne vinaigrette.  Everything was fresh, and the flavors complemented each other beautifully.

The roll featured main lobster, crab, mango, okinawa, potato and piquillo chimichurri – super flavorful so no soy sauce necessary IMO.  The korean tacos were seasoned with yakiniku sauce and served with pickled veggies + kimchee – def. one of my faves from the night!  Althoughhhh, it’s a tough call between them and the seared scallops.  The latter was seared perfectly and served in a citrus coconut plantain sauce + smoked bacon fufu.  I mean, I can’t even. I’m still salivating at the thought of it all. And the mexican street corn? Made with cotija, spicy mayo and lime, it was a total party in my mouth.  We ended the meal on an extra high note with different kinds of mochi ice cream + chocolate cake & caramel gelato. 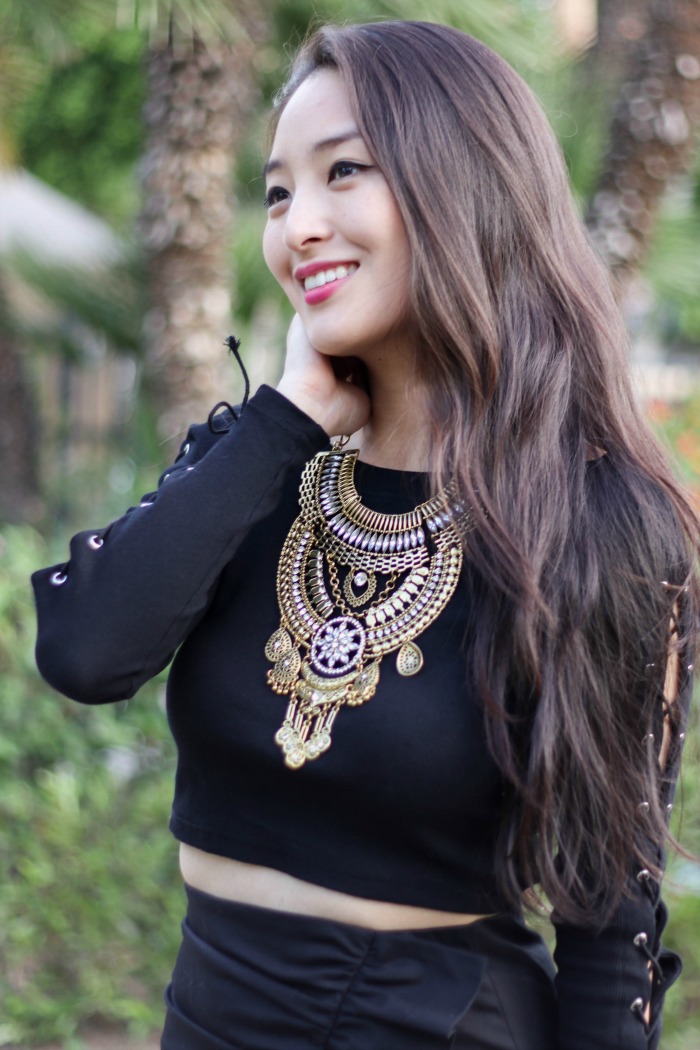 With our bellies full of food, Mel and I concluded that we desperately needed to work out so we powered through Tabata Strength (from the Insanity Max 30 workout) to burn calories before passing out.  Fast forward to day 4: we woke up bright and early again to check out the Desert Botanical Garden.  We had the option of sleeping in, but why do that when there’s more to see?

Tai picked us up and we got our browse on for a good 1.5 hours.  The garden was HUGE (140 acres to be exact) so we only got to see a small portion of it, but everything we saw looked gorg.  Some impressive stats for you guys, it houses 50k+ plants and averages 633k+ visitors yearly.  For those of you interested in visiting, tickets are $24.95 per adult, $12.95 for kids age 3-17, and free for members and children under 3. 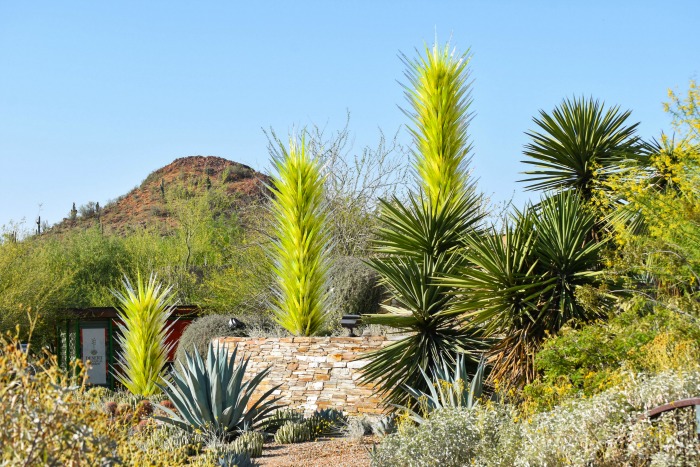 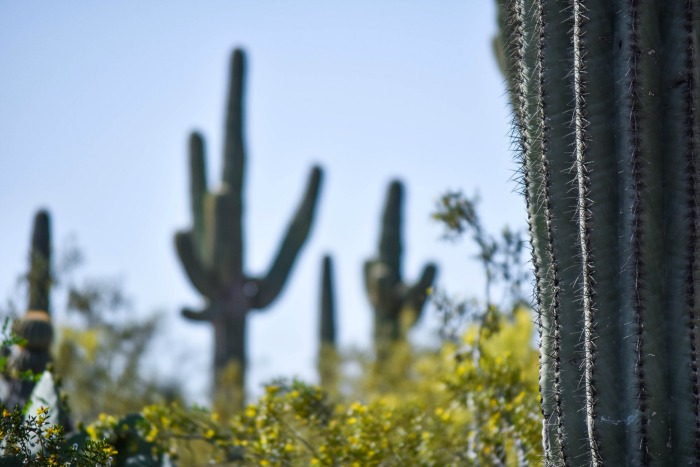 Afterwards, we met up with everyone at Phoenix Public Market Cafe for breakfast.  I ordered a latte and a housemade juice ($6.50) to start – it was called the Hulk, and it had spinach, kale, cucumber, apple, parsley, lemon, and celery.  For my entree, I wanted something healthy so I went with their Quinoa Bowl, served with poached eggs, market vegetables (sourced directly from the adjacent farmer’s market), quinoa, and pesto ($10.25). 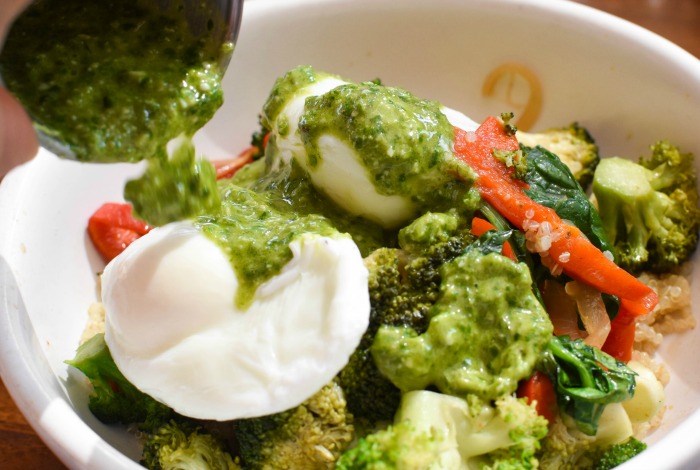 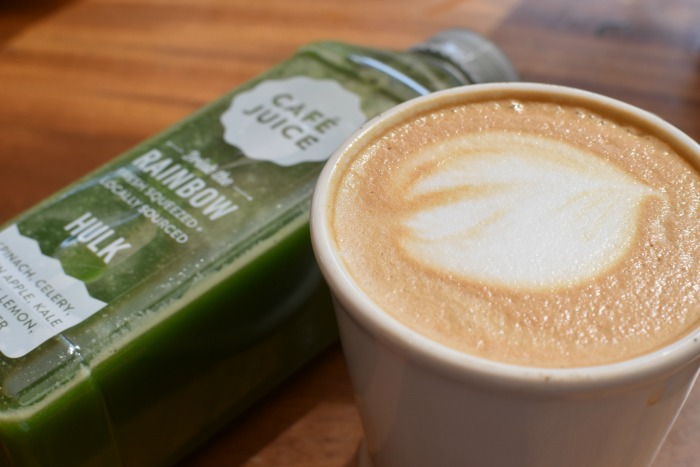 Management also brought out a platter of housemade pastries for us to share, and it was all super nom.  See that flaky goodness that’s topped with strawberry frosting? That’s their obscenely tasty homemade pop-tart.  I was half tempted to purchase a few to go, but I resisted my urges (self control FTW). 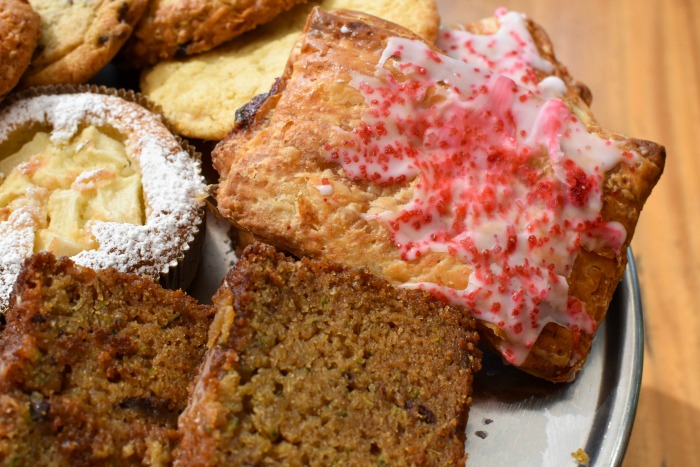 And that’s a wrap guys!  I hope you enjoyed reading all about Phoenix travel recap.  If you’re looking for a fabulous place to vacation, definitely consider AZ.  The food is phenomenal, the attractions are really interesting, and the scenery is absolutely gorgeous.  As always, if you have any questions or concerns, shoot me a message! I’m here for you all.  Before I leave, I want to thank Visit Phoenix for hosting me and my beautiful friends.  A special thanks to Trish Lanteigne for making it all possible!

To read more about my travels, make sure to check this tab out!