If you follow me on instagram, you already know I’m in Korea right now.  It’s been three years since I last visited the motherland, and so much has changed!  I’m currently staying with family in Yongin, but I’ll be in Seoul soon.  I’m also hitting up Jeju Island and Busan so I’m pretty stoked since it’s been like 13 years since I last visited those cities?  Make sure you follow along on stories for fun content, frands. 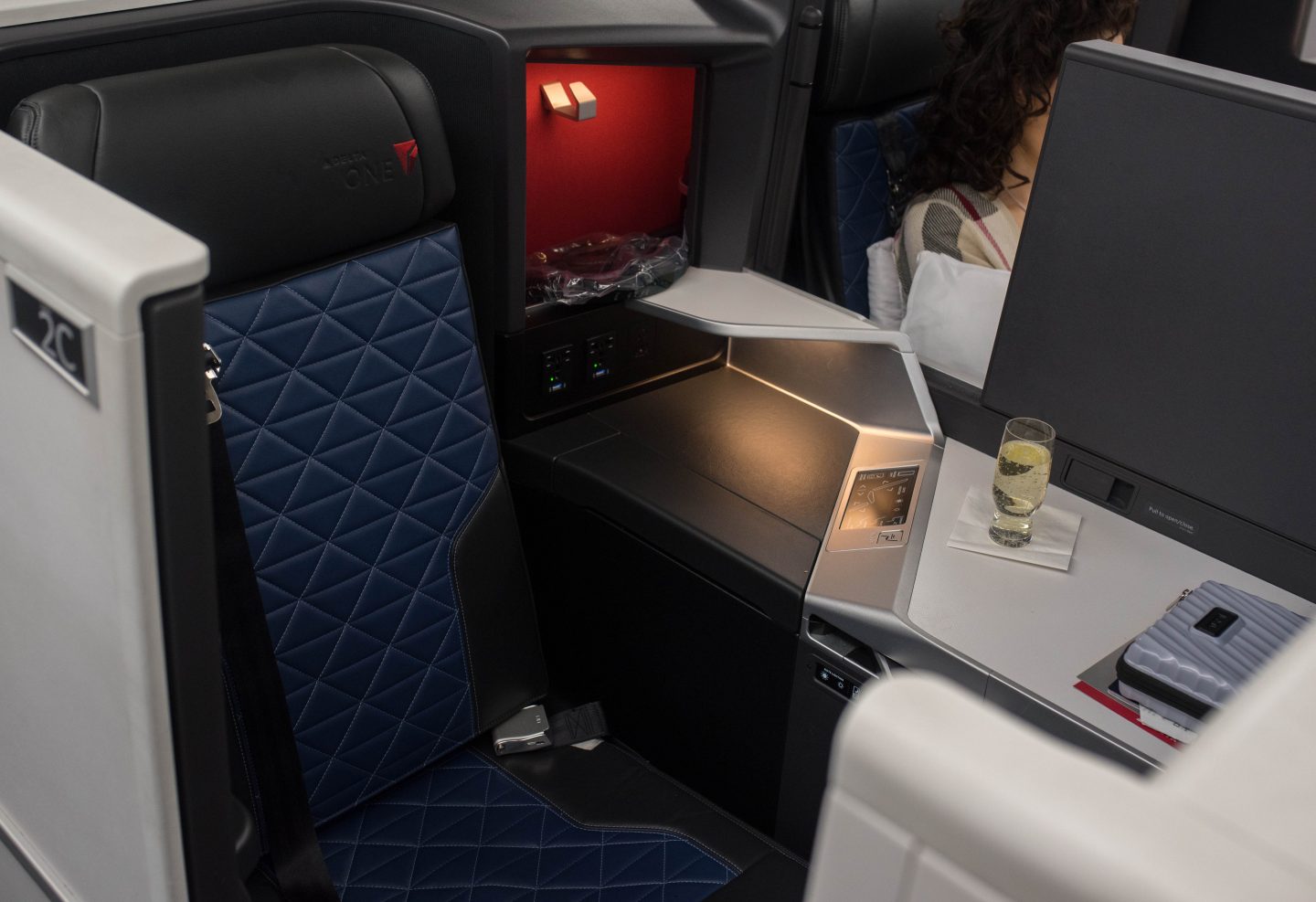 Anywho, enough rambling.  Let’s get to the heart of today’s post: what it’s like to fly first class to Asia.  I got a bunch of DMs asking if it was like “Crazy Rich Asians” so I thought I’d recap the experience for y’all since I had my DSLR handy. 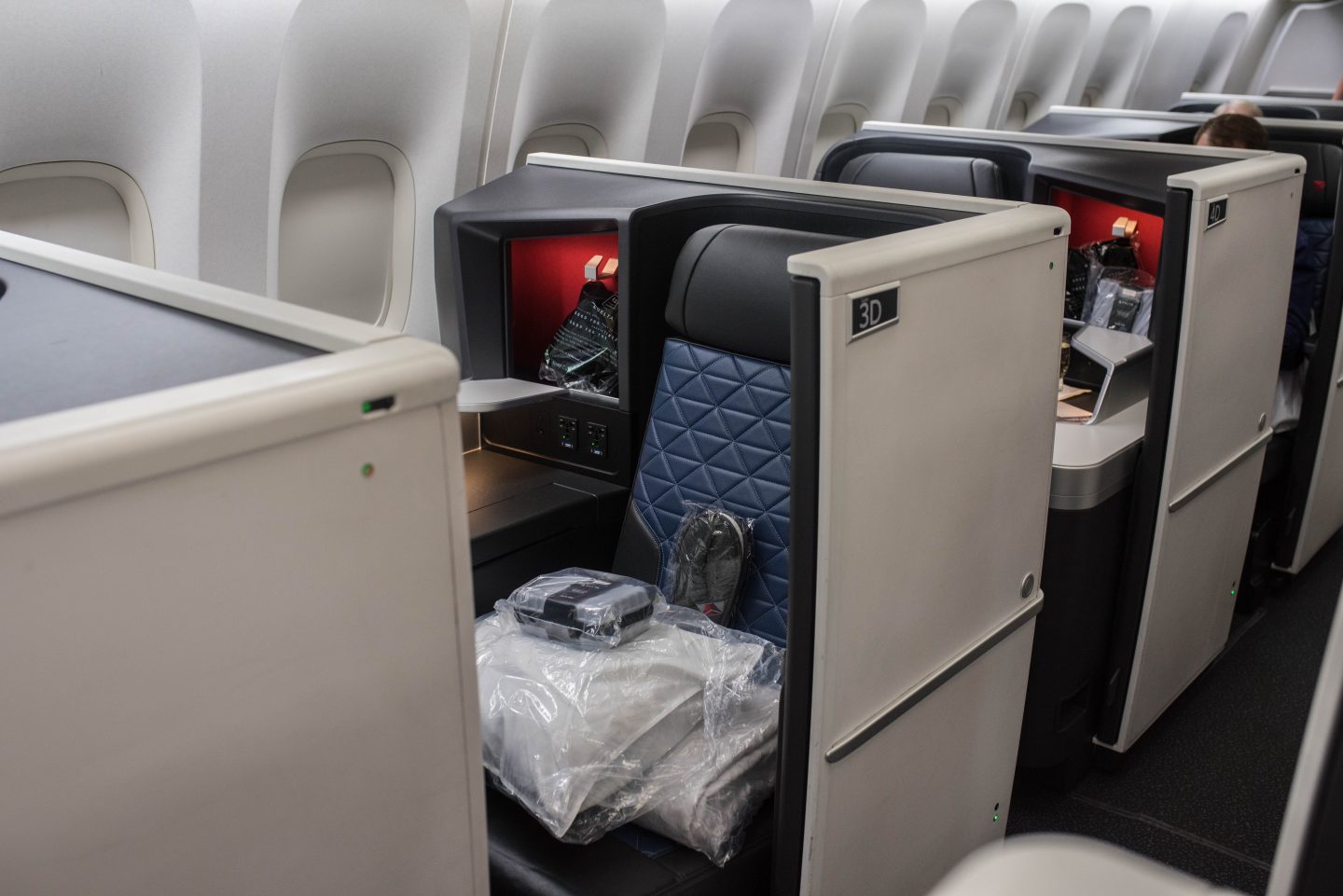 Each person got a spacious unit to themselves – sorry guys, my pics don’t do it justice – and the seats doubled as beds.  We were greeted with champagne before takeoff, and we got slippers and a cute TUMI care kit with a sleeping mask and other essentials.  They had a huge movie selection with new releases like Detective Pikachu, and the sound was great because they gave us dope headphones. 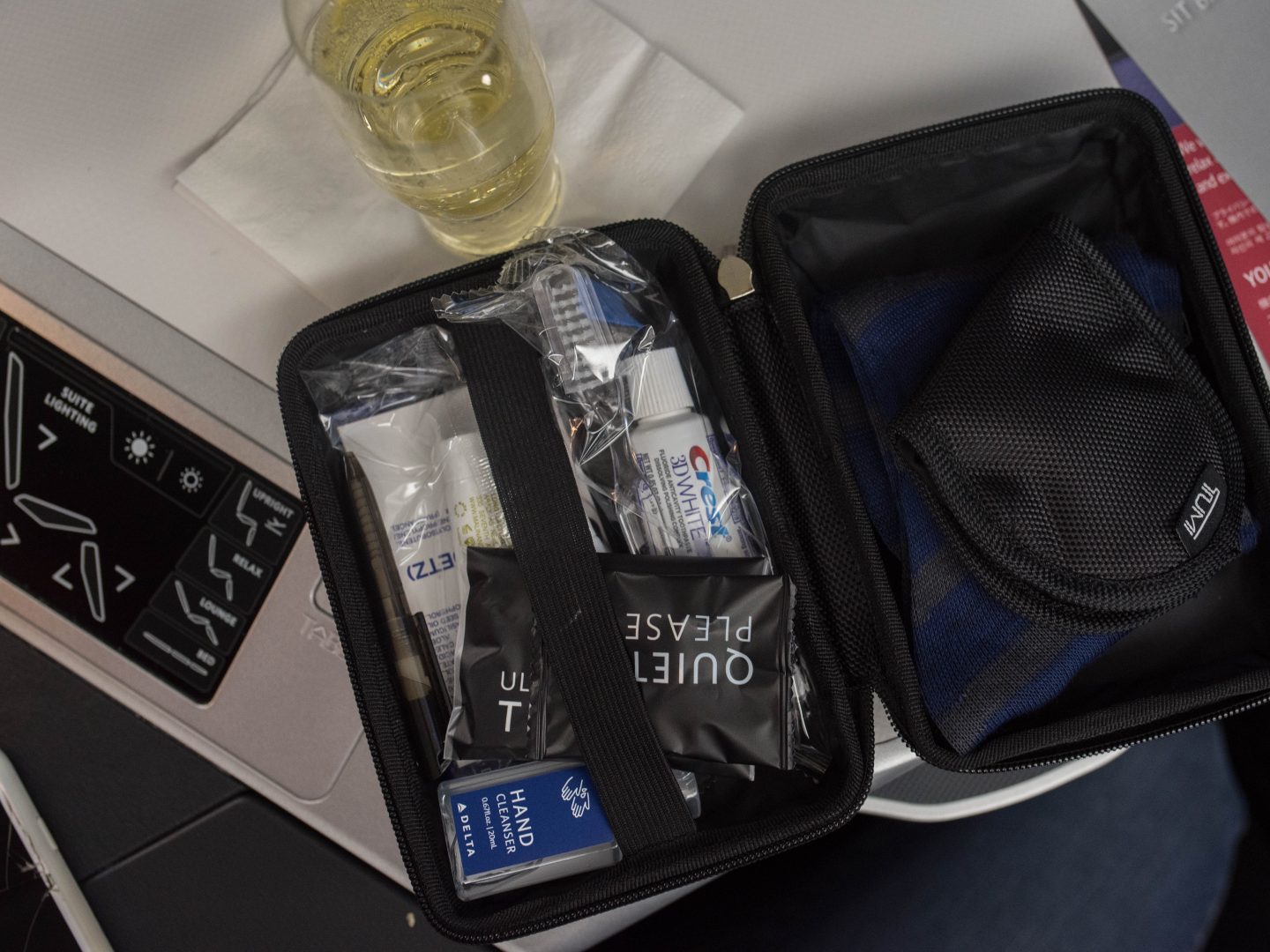 The Delta flight attendants made sure we were well taken care of at all times, and they kept the alcohol flowing during the entire flight.  I walked in thinking I’d go HAM on vino, but I barely finished a glass.  I know, I know, I’m weaksauce, but it’s the truth – homegirl can’t handle her liquor.

Dranks pictured below:  sparkling Pellegrino, a glass of  Cabernet, and their signature cocktail made with bombay sapphire gin, cranberry-apple juice and a splash of ginger ale.  It was pretty good, but I stopped after one sip because it was so freakin’ strong. 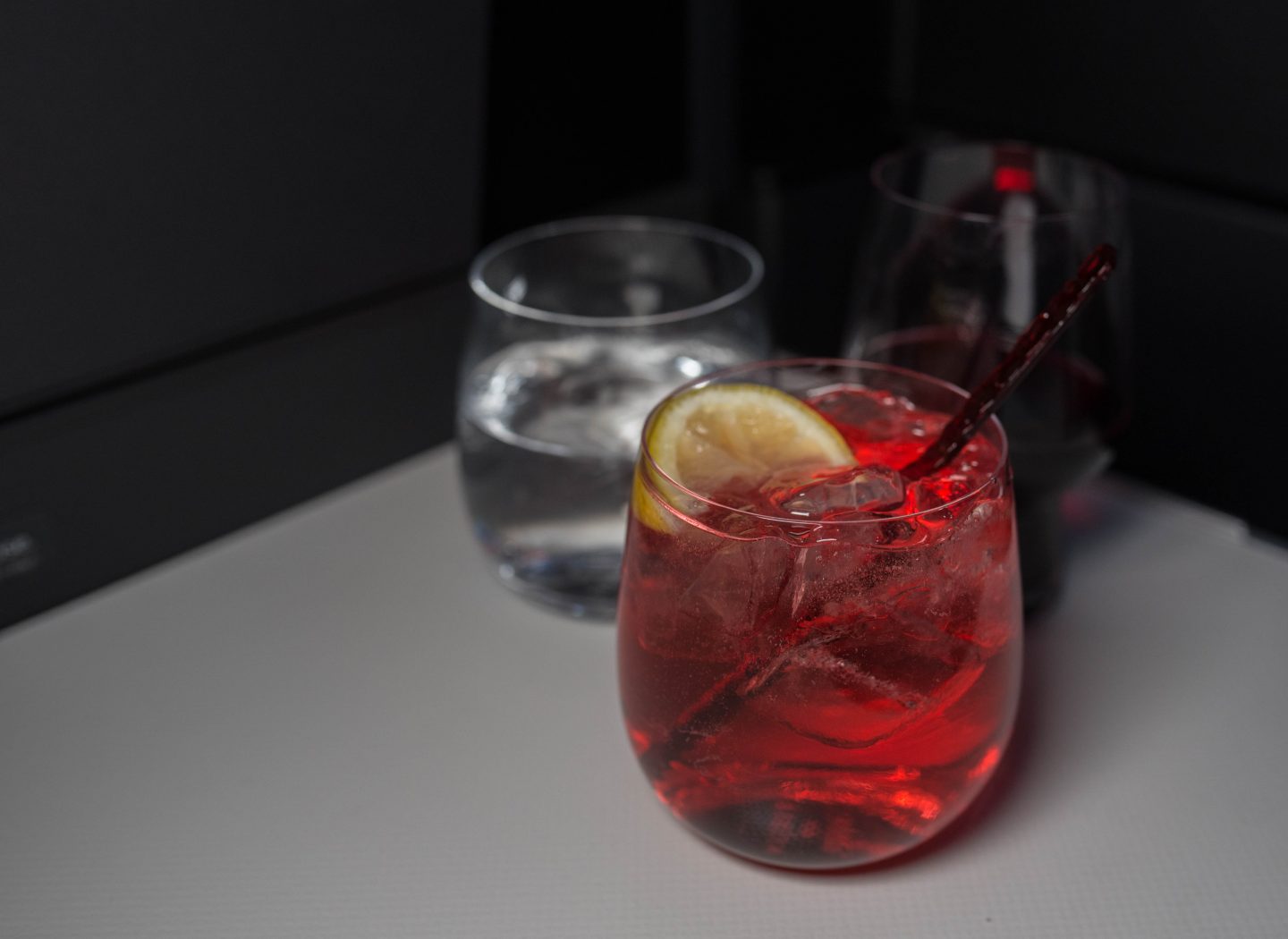 We got three meals on this flight:  dinner, a snack, and then breakfast.  Let’s just go in order because I took pics of almost everything!  Before I get into noms though, I want to tell you about their consultant chef because it explains why I got what I did.  Kwon Woo Joong is the chef at Kwonsooksoo, a two Michelin Star restaurant in Seoul, and he’s known for his authentic Korean cooking so when I had to choose between their Korean or Western menu, it wasn’t much of a choice.

The meal came with assorted banchan and poached shrimp with pine nut salad.  There was supposed to be kimchi, spinach egg roll and stir-friend potato with perilla seed, but they messed up mine and only brought out kimchi and…pineapple cake? Good thing I’m not picky, ha.  I ended up trying some of mom’s  side dishes though so it’s all good. 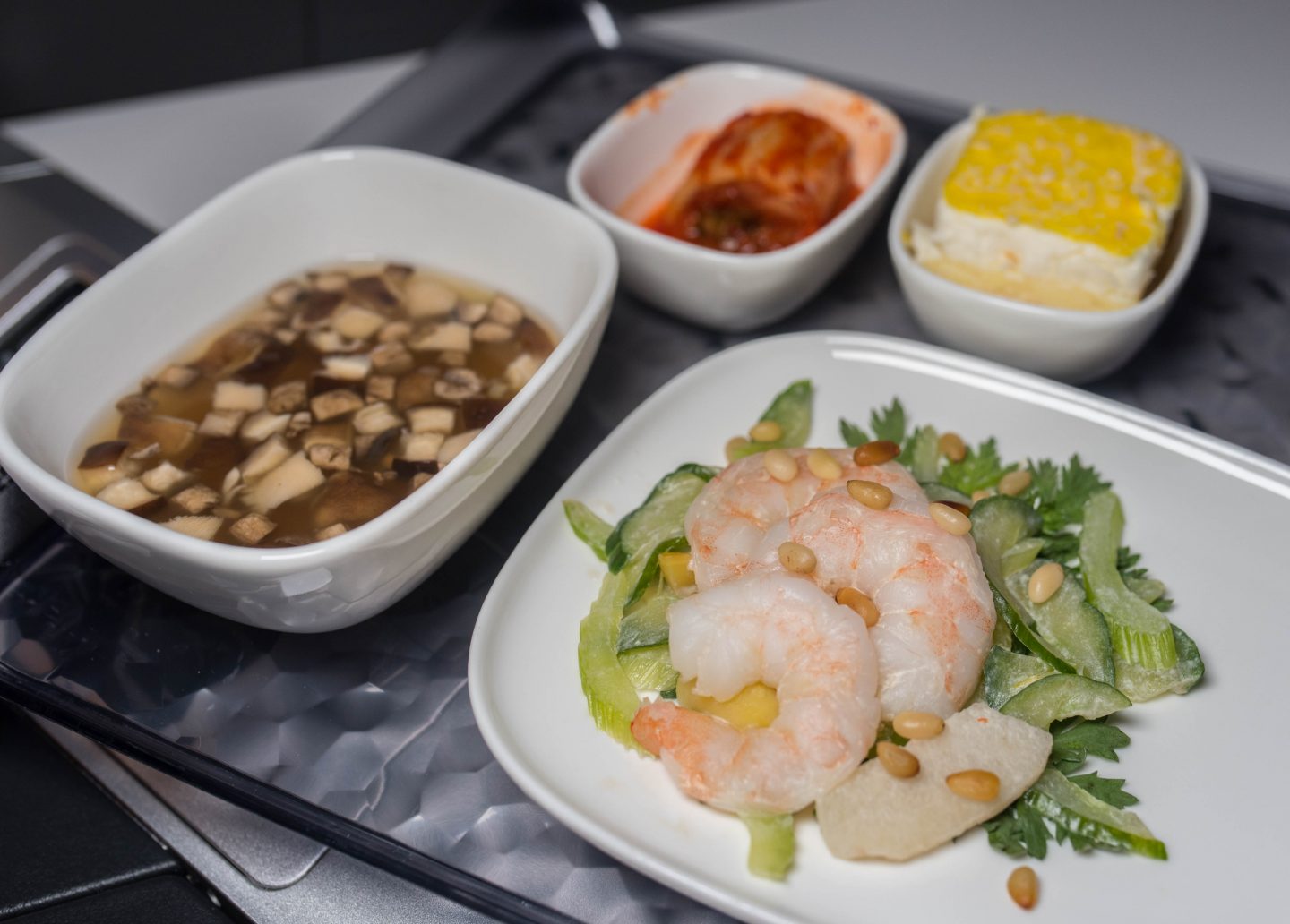 The main course was braised beef (galbi jjim) with neungi mushrooms, steamed rice and miso soup with chopped mushrooms.  The meat was really tender and flavorful, but I wasn’t as impressed with the shrimp.  The kimchi was surprisingly tasty, but the egg roll (gaeran mali) and potato side were eh.  I’m going to try the Western menu when I fly back so I’ll let you guys know how that is.

For those of you interested, western starters were as follows: shrimp cocktail, an iceberg wedge salad, and tomato basil bisque.  For entrees, you had a choice between seared beef tenderloin with jumbo asparagus, garlic herb dutch potatoes and béarnaise sauce, chicken milanese with orzo and pine nuts topped with fresh tomato salad, bourbon glazed cedar plank salmon, and cacio e pepe ravioli with parmesan fondue, sautéed spinach and blistered peppers.  The guy next to me got the beef, and it looked hella tasty so I’ll probably get that next time. 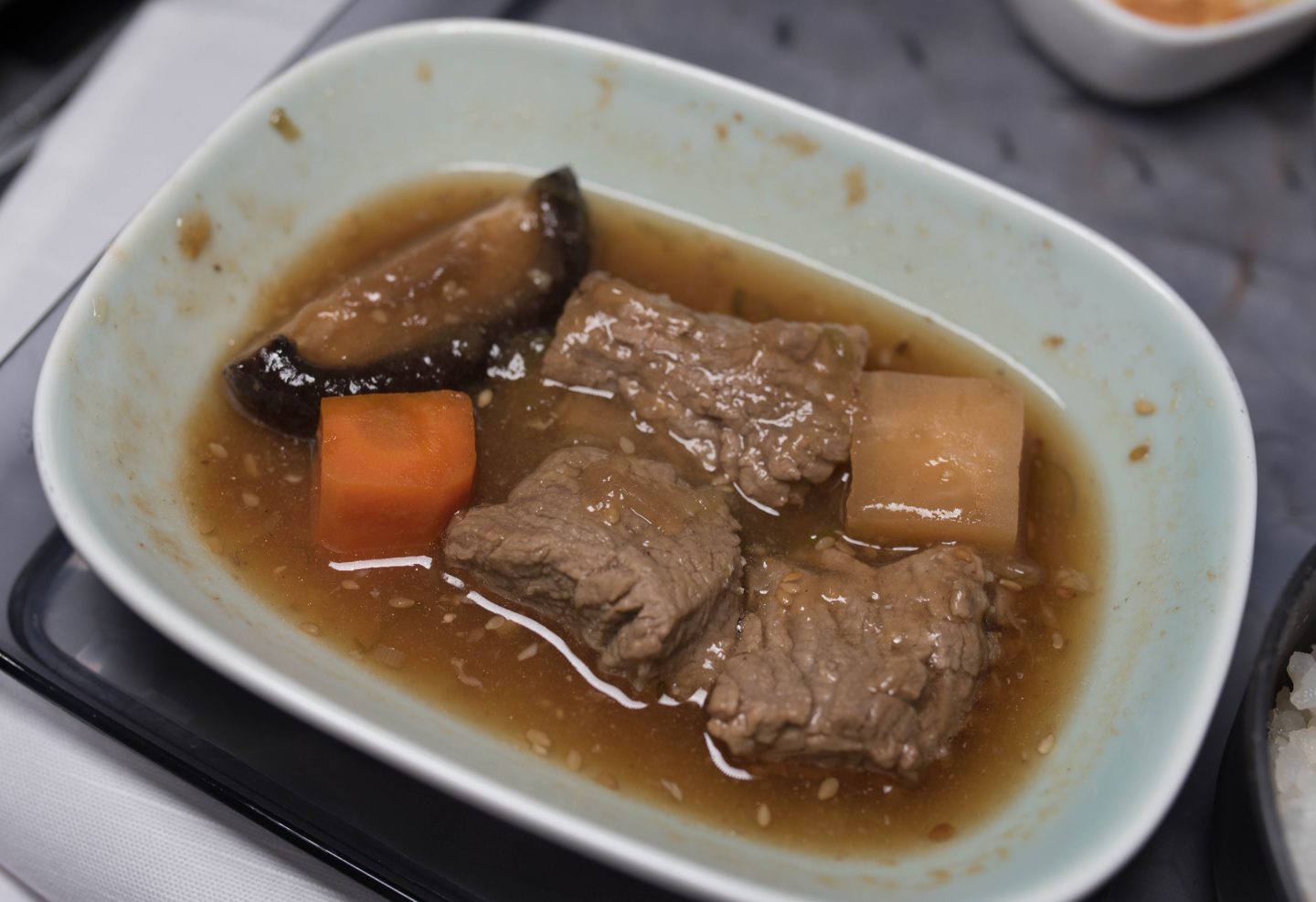 For dessert, they offered a vanilla ice cream sundae with your choice of sauces, nuts and whipped cream, a “raspberry macaron” – I put that in quotes because it’s definitely not a macaron, lmao – and a selection of fine cheeses (cypress grove midnight moon, kaltbach gruyére, and buttermilk blue affinee with fresh fruit and fig compote).  I got one of each because I’m a fatass and YOLO. 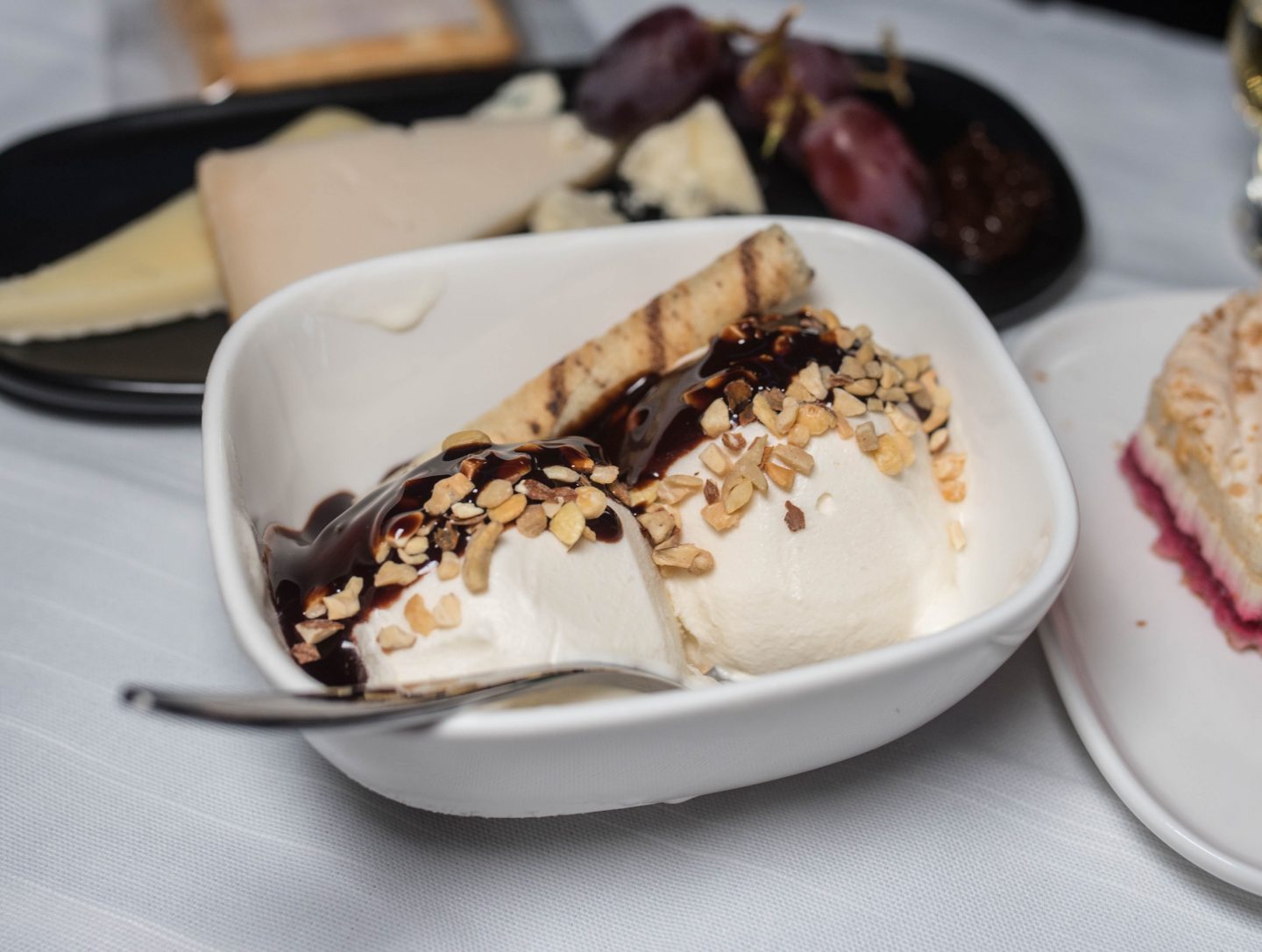 They also had two different dessert wines so I got a glass.  I wish I knew the names of all the wines, but I totally forgot to take a picture of the vino list soooo sorry. 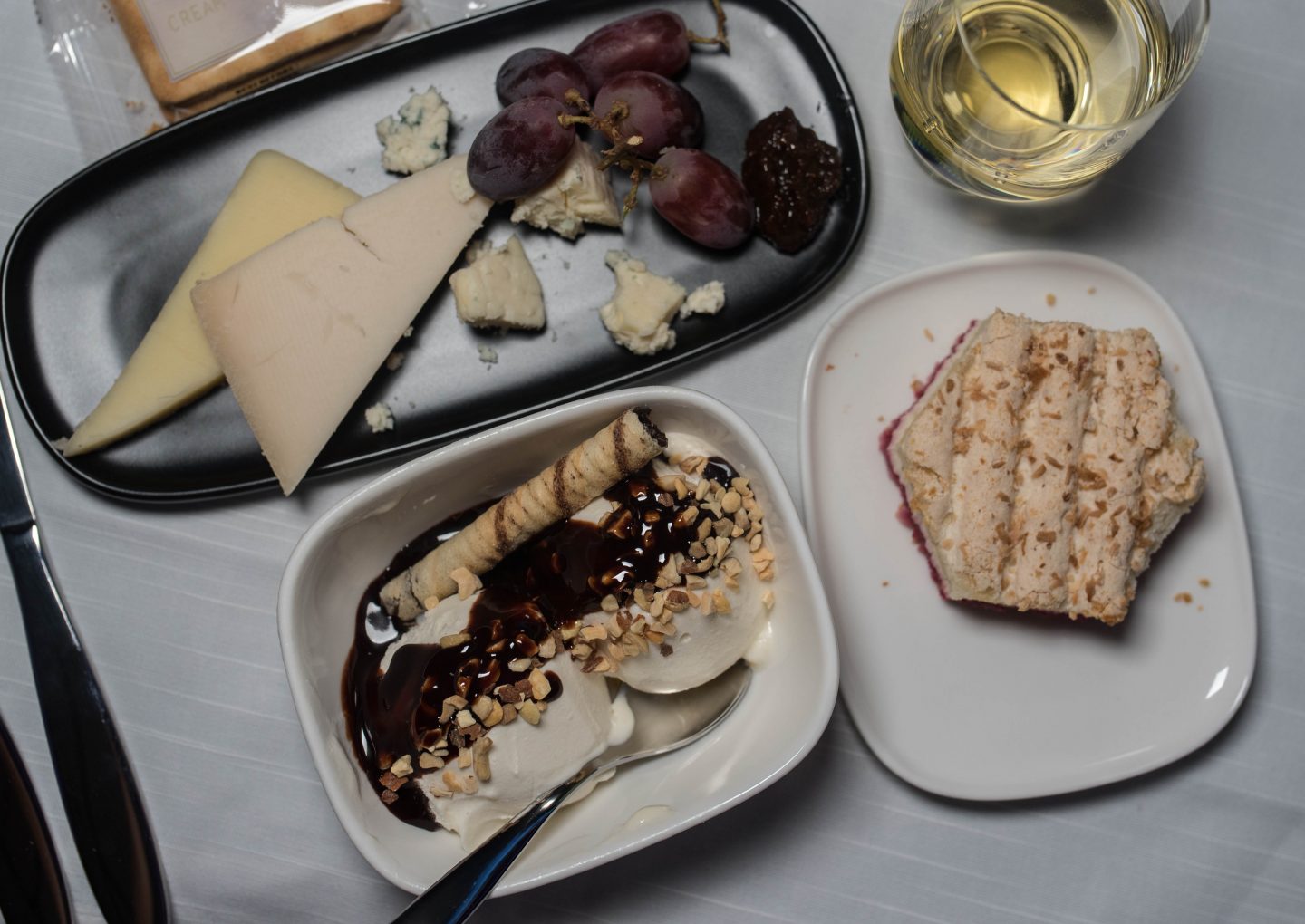 After dinner I watched 300: The Rise of an Empire, The Devil Wears Prada, and Sex and the City 2 before passing out.  They had snacks laid out for us, but I was full so I waited until they brought everyone their mid-flight snack.

They had two choices:  seven pepper tuna with wasabi mousse, seaweed salad and pickled vegetables and croutons vs shrimp pancake with crown daisy.  I don’t eat raw fish…or any fish for that matter… so I went with the latter, and it was SUPER nom!  I could’ve easily downed 10 of these babies. 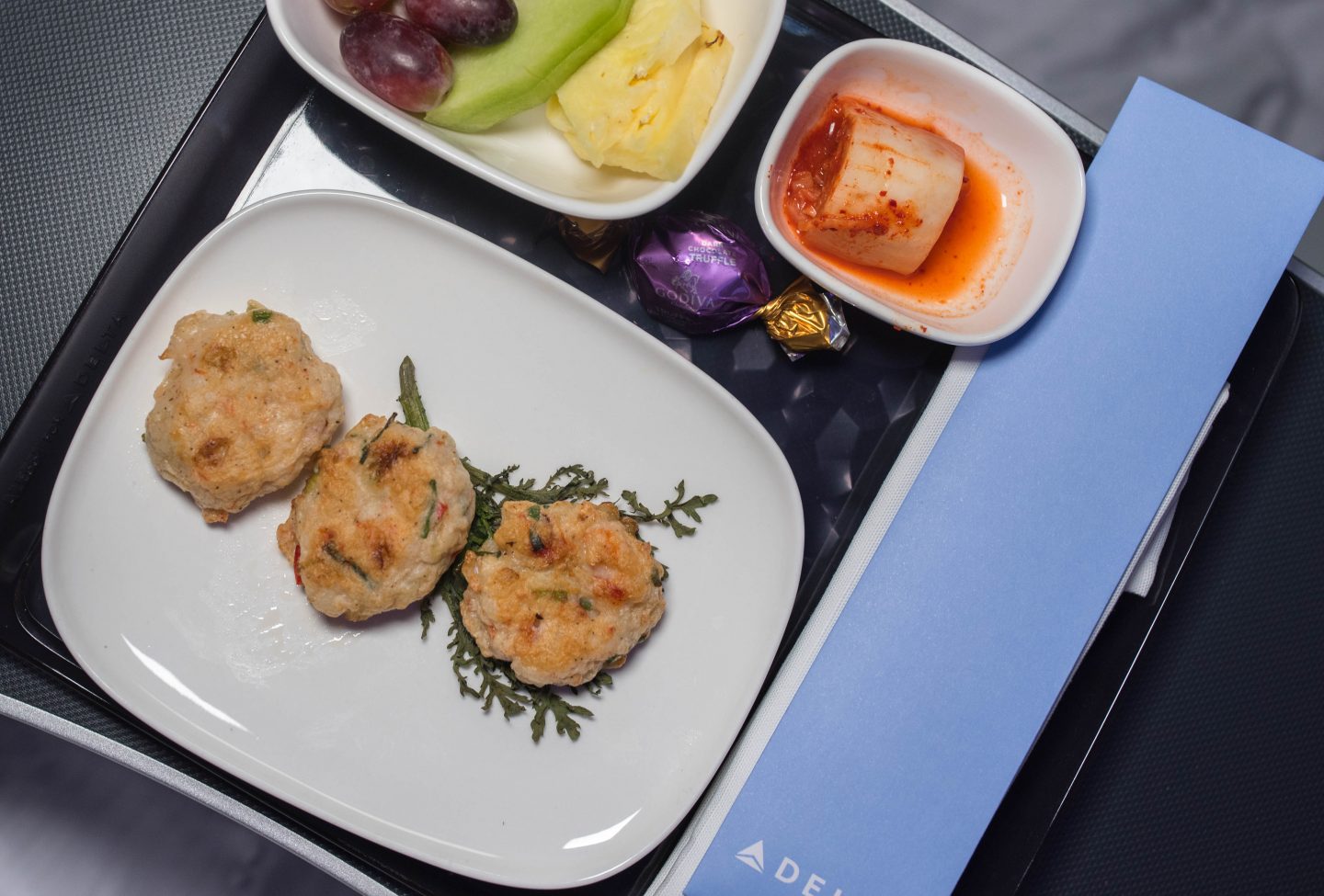 And last but not least, our “almost there” meal.  We landed at 5:30 so it wasn’t breakfast, but whatever goes.  I got the potato and gruyère frittata, and my mom got the spring bibimbap.  We like trying different things so we swapped mid meal because that’s how asians roll. 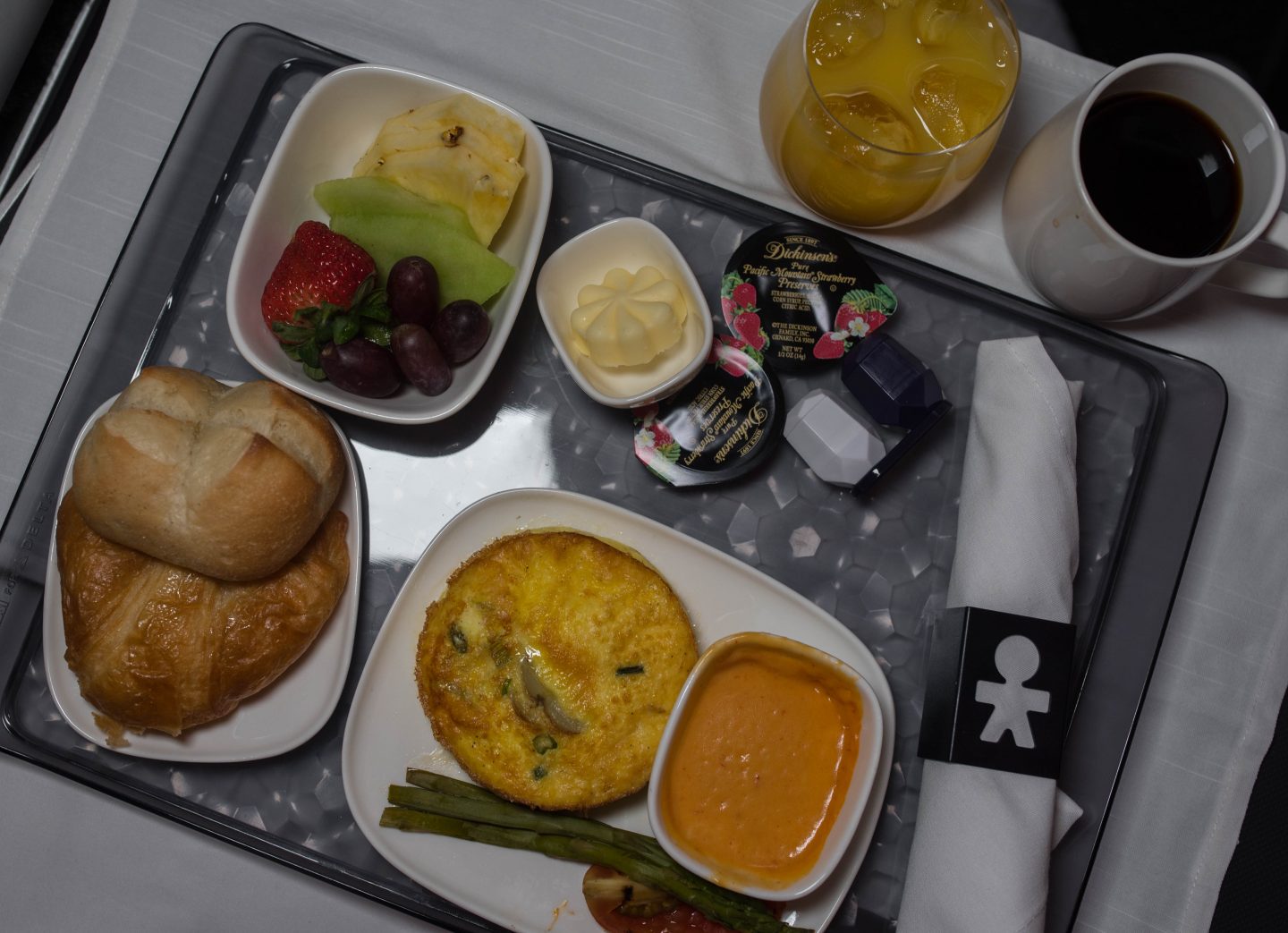 The frittata came with a delish tomato hollandaise, and the rice bowl had tons of assorted veggies.  Both were solid so props to Delta! Anywho, that’s it on the food front, friends. 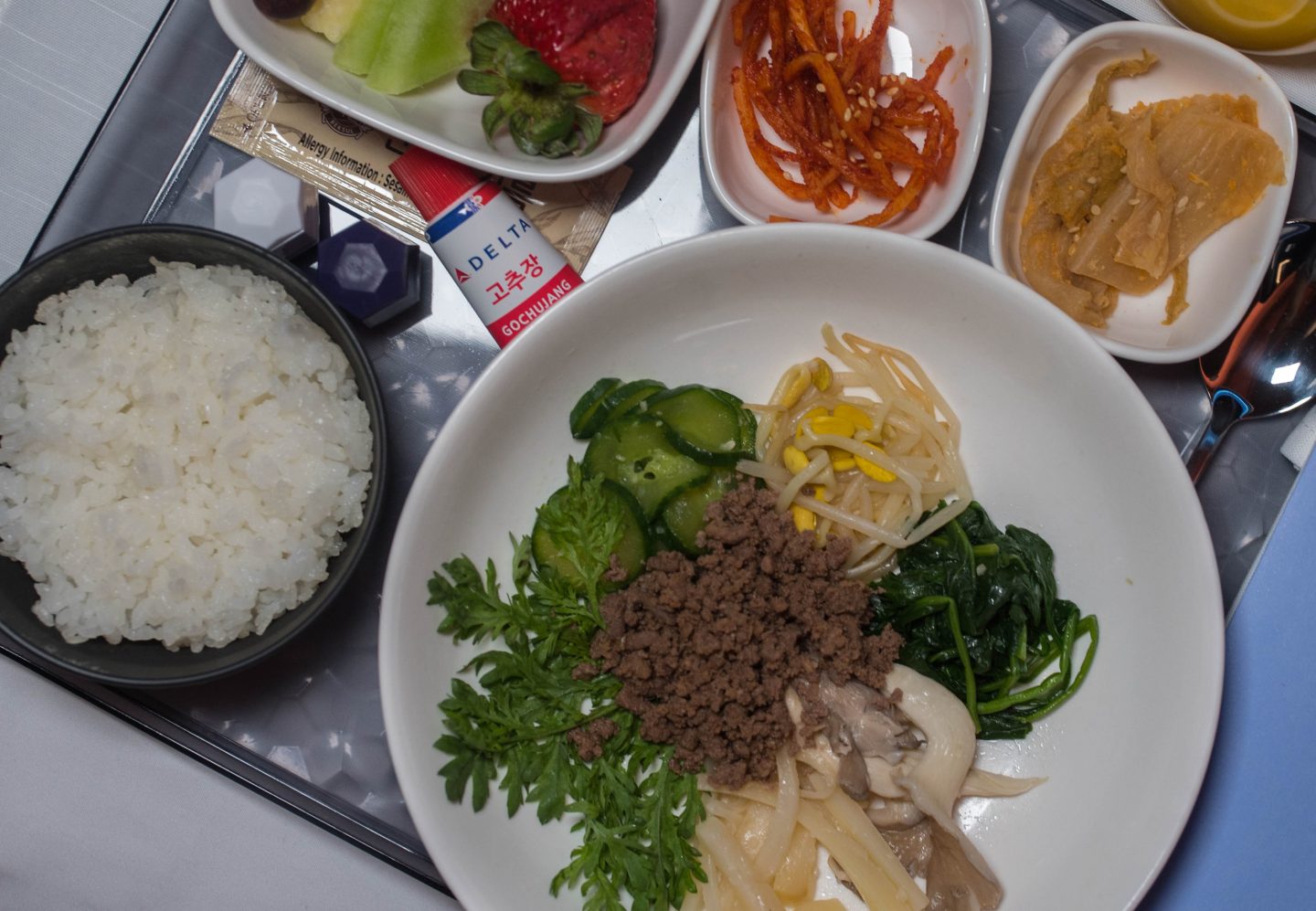 Let me know what you thought of everything by leaving a comment below, and stay tuned for more travel content.  I’ll be updating WAY more frequently now that I’m done with school so keep an eye out. I’ll let you guys know when I figure out my new posting schedule.  Until next time, friends!